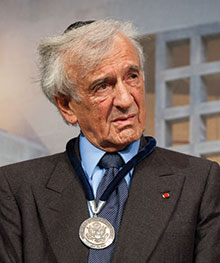 The inaugural United States Holocaust Memorial Museum Award was bestowed on Nobel laureate and Founding Museum Chairman Elie Wiesel—and renamed in his honor—for the singular role he has played in establishing and advancing the cause of Holocaust remembrance.

A Holocaust survivor, Elie Wiesel published the memoir Night in 1958, placing his personal memories into the public conscience. As other survivors stepped forward to tell their stories, the movement of remembrance began, culminating with the opening of the Museum on the National Mall in 1993.

His extraordinary vision and moral stature inspired a worldwide movement to ensure the lessons of the Holocaust forever shape the human experience.

In the aftermath of the Holocaust, at a time when the world could not bear to remember, Elie Wiesel could not bear to forget. Exemplifying the very ideals that the Museum encourages all to aspire to—that memory calls us to action—his extraordinary vision and moral stature created not only our institution but also inspired a worldwide movement to ensure the lessons of the Holocaust forever shape the human experience.