Kulisiewicz recalls that a local tragedy sparked the creation of “Heil, Sachsenhausen.” The event took place in July 1943 in the Sachsenhausen subcamp of Oranienburg, where Hans Zahn, director of the… 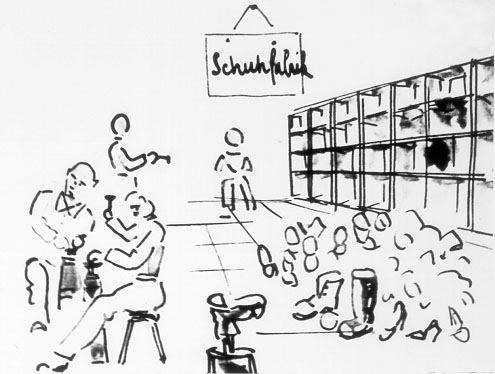 Kulisiewicz recalls that a local tragedy sparked the creation of “Heil, Sachsenhausen.” The event took place in July 1943 in the Sachsenhausen subcamp of Oranienburg, where Hans Zahn, director of the camp motor pool, and his 15-year-old daughter Eliza were arrested for forwarding letters from a Polish prisoner. Accused of having had “intimate contacts” with Poles, Eliza was interrogated and tortured by the Gestapo. She died soon afterward, a possible suicide.

“Heil Sachsenhausen” protests Nazi “racial” laws, specifically the ban on Rassenschande (“race defilement” or “mixing”). Sexual relations between German “Aryans” and Jews had been illegal since the proclamation of the Nuremberg Laws in 1935; further decrees enacted during the war also outlawed sexual relations between Germans and (primarily Slavic) prisoners of war, the offenders being subject to stringent penalties. Whether Eliza Zahn was, in fact, tried for “race defilement” remains unclear. To the Gestapo and the camp command, the act of abetting a prisoner to communicate illegally with outsiders may have been the more serious crime. But to Kulisiewicz the charge was Rassenschande, and the incident provoked him to skewer through song many assumptions dear to the Nazi German world view. The German term Kulturkampf (“culture war”), heard in the refrain, originally described the 19th century political struggle between the German government and the Catholic Church; Kulisiewicz uses the word to denote the Nazi effort to destroy Polish culture.