Music by: camp adaptation of I szumyt, i hudyt (Ruthenian folk song) 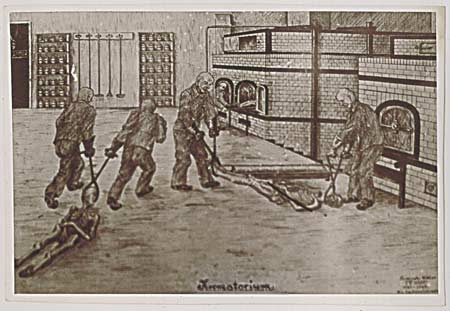 Wilhelm Böhm, nicknamed “Czarny” (black) Böhm, was among the more grisly denizens of Sachsenhausen camp. Short and hunchbacked, with long, ape-like arms, Böhm, a camp Kapo, was also distinctly charred in appearance due to his work as a cremation specialist. Wildly enthusiastic about his job, Böhm had been known to cry out to passing prisoners, “Come to Böhm! You’ll surely be coming my way soon, so why not now?” Kulisiewicz reports that in 1941–1942 Böhm helped cremate some 18,000 Soviet prisoners of war murdered at Sachsenhausen. He is thought to have died of a contagious infection in 1943.

Kulisiewicz first performed Czarny Böhm at a cabaret staged by the inmates of Block 23 on New Year’s eve, 1942. The first three stanzas of the song are meant to represent the voice of the ghoulish Böhm, while the final stanza shifts to Kulisiewicz’s own point of view.