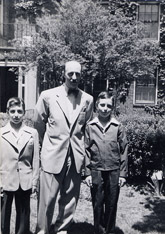 Born in 1906 in Suwałki, Poland, Ben Stonehill (Steinberg) immigrated with his large family to Rochester, New York, while still a young child. In 1929 he moved to New York City, where he found work… 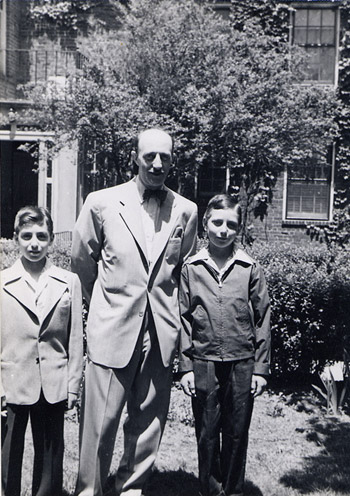 Born in 1906 in Suwałki, Poland, Ben Stonehill (Steinberg) immigrated with his large family to Rochester, New York, while still a young child. In 1929 he moved to New York City, where he found work installing carpet and linoleum, and was soon the proprietor of a small floor-servicing business. A fluent Yiddish speaker who cherished his cultural heritage, Stonehill was also a devoted zamler, a collector of folklore. In the wake of World War II and the Holocaust, he sought to preserve the repertoire of European Jewish songs he felt was in danger of being forever lost.

An opportunity arrived in 1948, when he learned of a major gathering point for new refugees: the Hotel Marseilles in upper Manhattan. Lacking recording equipment but determined to pursue his mission, Stonehill took a sales job at a local wire-recorder dealership, and emerged from the showroom with a salesman's demonstration model wire-recorder. Nearly every weekend that summer he hauled this machine by subway from his home in Queens to the Hotel Marseilles in order to record songs and stories from hundreds of survivors he encountered in the hotel lobby.

Stonehill documented an unparalleled cross-section of music then current among Jewish Displaced Persons (DPs), from traditional Hasidic nigunim (religious melodies) to prewar folk and popular songs in Polish, Yiddish, and Russian; from Soviet propagandist ballads to Zionist pioneer anthems; from songs recalled from ghettos and camps to lyrics relating the experiences of recent DPs. The inventory he eventually drew up lists 1,054 separate titles.

In 1964, Stonehill realized a long-held dream by delivering a lecture on folksong at the YIVO Institute for Jewish Research in New York. The following year, terminally ill, he abandoned his book-in-progress, “Adventures of a Jewish Ballad Hunter,” and bequeathed the field recordings (by then copied to magnetic tape) to YIVO, the Library of Congress, and other collecting institutions. (The United States Holocaust Memorial Museum acquired its set from the Library of Congress in 2005.) This large and diverse collection, rescued for posterity by a modest but remarkably dedicated zamler, remains little known to the general public and the scholarly community.