< Behind Every Name a Story

The Museum’s Behind Every Name a Story project gives voice to the experiences of survivors during the Holocaust. 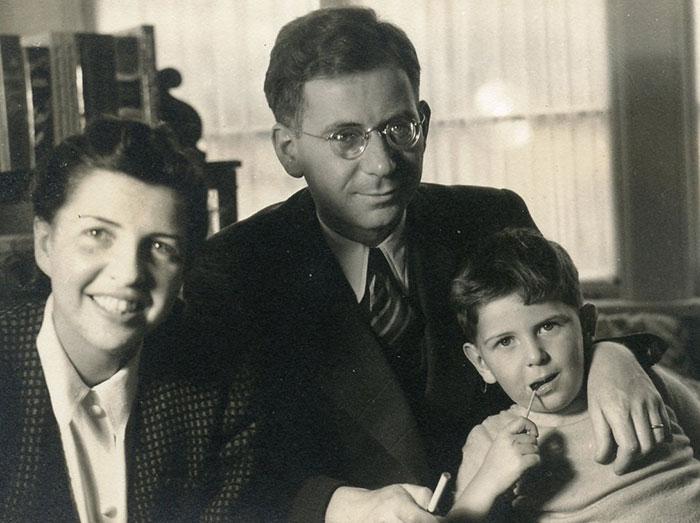 The partisan quarrel over how to deal with the United States' illegal immigrant population has prompted me to reflect on my own tenuous arrival, as a 7-year-old lad, in San Francisco escaping from World War II.

In an odyssey that took us nearly halfway around the globe, my parents and I fled Warsaw in a taxi just ahead of the German army, took a train across the Soviet Union in winter, and landed in Japan. From there, we traveled by passenger ship to the United States shortly before the attack on Pearl Harbor.

Much more than the vast distances, border controls threatened at every turn and left us in legal limbo even when we finally arrived in America. Somehow we found a pathway around every obstacle, starting with our dash out of Poland in 1939, days before the Germans blew up the bridges that spanned the Vistula River, making further escapes a highly problematic exercise.

My father, Marion (Martin) Glass, decided to head eastward, taking our chances with the Bolshevik invaders and the antisemitic Polish peasantry, rather than remaining in Warsaw. His parents decided to stay, taking their chances with the German invaders, with fatal consequences.

Dad, who had been drafted into the Polish militia, had been filling sandbags around public buildings, which the Germans were bombing day and night. He was working alongside a young Roman Catholic taxi driver who knew where to obtain black-market gas. With little more than the clothes on our backs, as dawn arose the following morning, our two families jointly departed.

When the taxi ran out of gas, they hired a horse-drawn cart, paying the driver with one of the gold coins that my father providentially had taken with him. They stuck to back roads to avoid the marauding Soviet troops. We arrived, after several close shaves, in Vilnius—the capital of an ostensibly neutral and independent Lithuania, a nation that by then the Soviets had nevertheless already occupied in all but name.

In Vilnius, we encountered the honorary Dutch counsel, a sales agent for Phillips, the giant Dutch electronics firm. He gave us documents that would have allowed us to become permanent residents of Curacao, an island in the Netherlands Antilles.

Armed with those documents, my father went to see Chiune Sugihara, the Japanese vice-consul in Lithuania. On his own initiative, Sugihara was writing travel visas that eventually allowed several thousand Jewish refugees, nearly all of them Poles, to enter Japan, where wealthy pre-communist White Russian traders would subsequently vouch for us. Risking his career, Sugihara issued the visas against direct instructions from Tokyo. We got three of them. In 1985, Israel designated Sugihara as one of the "Righteous among the Nations," (external link) the sole Japanese citizen to be so honored.

Given his relatively low-ranking post and given the culture of the Japanese Foreign Service bureaucracy, Sugihara's actions amounted to an unusual act of disobedience. According to a 1995 biography by his wife, Yukiko, on the night before their departure in 1940 for Berlin, they did not sleep, remaining awake to approve more visas. Witnesses said he was still writing them while in transit from his hotel. Even after boarding the train, he was throwing visas out of the train window to a pack of desperate refugees as the train departed. Before leaving, he also persuaded Soviet apparatchiks to let refugee Polish Jews travel through the country via the Trans-Siberian Railway—albeit at five times the standard ticket price. That single act of official communist greed left us nearly broke when we arrived in Vladivostok.

The hardest documents of all to obtain were the ones that would allow us to enter and leave the Soviet Union. Each interview was conducted at around three in the morning by the Soviet secret police, known then as the NKVD. Some of the interviewees never returned. Those who did were told that they could only pay for their visas in "hard currency," chiefly US dollars or British pounds. However, the mere possession of such hard currencies was grounds for immediate arrest and deportation to a Siberian gulag.

The interrogator informed my dad that he was "an enemy of the people." Notwithstanding this designation, we somehow got those visas as well. My father, who died in New York City in 1993 at 81, never told me how he had overcome the hard currency conundrum.

Leaving the Soviet Union, we sailed to Japan and confronted the next challenge, which was passage through the United States en route to the Dominican Republic, a Caribbean nation that gave us residency visas in Japan in exchange for the ones for Curacao. Even though we had the paperwork, Curacao was not accepting any European refugees who were not Dutch citizens. Joseph Grew, the US ambassador in Tokyo, issued us one-week transit visas even though he had been told by the State Department not to do so.

Armed with these visas, my parents and I were allowed to board the passenger liner Kamakuru Maru in Yokahama and sail across the Pacific, with a daylong stopover in Honolulu. Just months later, the United States and Japan were at war, and our voyage would have been impossible. The passenger ship, which had been equipped with hot tubs, was requisitioned as a transport by the Imperial Japanese Navy and eventually sunk in the Philippine archipelago. Before that, the Kamakuru Maru brought us, and a handful of other Europeans, to San Francisco.

For us, the challenge of finding a safe new home wasn’t over yet. Our US visas gave us barely enough time to cross the continent by train and depart from a Manhattan pier for our designated Caribbean destination. Moreover, by then my parents had decided to remain in the United States. German U-boats had turned the waters off the nation's East coast into a shooting gallery. With every coastal city from Portland, Maine, to Miami lit up like so many Yuletide trees, the number of sunken cargo freighters, oil tankers, and passenger vessels silhouetted from land quickly mounted to horrific proportions.

At the same time, the immigration authorities had not lost sight of us. Repeatedly, they reminded my parents that, as illegal immigrants, they needed to leave at once, taking their only child with them. However, Dad found an escape clause. Under the law, we could be deported solely to one of two countries: The one from which we had immediately entered the United States or else to our native land. Both propositions were non-starters. Congress had declared war on Japan, and Poland, the land of our birth, had been carved up between Nazi Germany and Soviet Russia under the infamous Hitler-Stalin pact.

If, as my father put it to me years later, we had, in fact, managed to survive, as Polish Jews from having been murdered by the Nazis; and if we had, in fact, managed to leave the Soviet Union, via Vladivostok, without so much as a kopek in our pockets, even after having been declared "bourgeois enemies of the people"; and if we had managed, in fact, to have also left Japan a few months before the war precluded any further such departures, then he had little interest to complete our family's life journey at the bottom of the Atlantic Ocean, after encountering the business end of a German torpedo.

Given what we had already been through, Dad’s reluctance to subject us to further death-defying risks triggered a labyrinthine judicial process that ended only when we were able to become US citizens. The key proved to be a wartime executive order issued by President Franklin D. Roosevelt that opened to illegal immigrants unfilled slots in an otherwise rigid Polish immigration quota, turning a blind eye to how they managed to get here. At the time, the annual Polish quota was subscribed until 1962, but the war had altered that equation. Some people may choose to draw a parallel with President Obama's executive actions in the same sphere, although, so far as I can discern, Congress never objected to what FDR did.

To become US citizens, my father (who had been paroled by the feds, enabling him work at a ball-bearing plant in Brooklyn), my mother, and I had to leave the country. It was only for a week, and we went to Montreal, Canada. By then, I had mastered English, while retaining my native Polish (which we spoke at home) but having lost the Japanese I had learned during our sojourn in Tokyo.

In September of 2014, my wife and I traveled to Warsaw, which I had left with my parents, in 1939, precisely 75 years earlier. The Germans had almost entirely destroyed the city during the war, but as we turned a corner we saw that an apartment house, which my grandfather had owned and in which I had lived, one of the most modern in Warsaw at the time, had survived. That was because high-ranking Nazi officers that ran the city used it as a billet.

What I do know all too well from those adventures was that of 3.3 million Jews that lived in Poland in 1939, only some 200,000 survived the war. Since I'm one of them, finding a way to remain in the United States as an illegal alien proved to be one heck of a sweet bargain.

Andrew Glass is a POLITICO contributing editor. Listen to an oral history of his story.