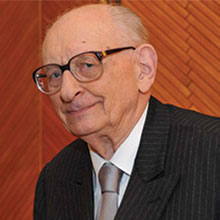 The United States Holocaust Memorial Museum mourns the passing of ​our longtime friend and partner Władysław Bartoszewski. His heroic actions during the occupation of Poland by Nazi Germany serve as an inspiration to Poles and people worldwide.

​ Mr. Bartoszewski was imprisoned in Auschwitz soon after the German occupation. After his release, he played leading roles in the Polish resistance and ​with Zegota, the Council for Aid to the Jews, which helped thousands of Jews when doing so was punishable by death.

​After the war, Mr. Bartoszewski spoke out against the Communist ​regime, for which he was​ again​ imprisoned.​ He wrote several important historical books about the German occupation of Poland and the fate of Jews. After the fall of communism, he served twice as Poland’s foreign minister.

​In recent decades, Mr. Bartoszewski chaired the International Auschwitz Council, an advisory body to the Polish prime minister, which is responsible for overseeing the site of the camp. He was a leader of Polish-Jewish reconciliation, earning great respect in Poland, Europe, and the wider world.

In 2013, ​on the occasion of the Museum's 20th anniversary, he was given the institution's highest honor, the Elie Wiesel Award, in recognition of his​ exceptional courage and leadership, during and after the Holocaust.

​He leaves an exceptional legacy that shall not be forgotten.