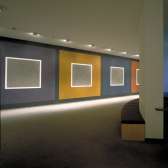 The Museum notes with sadness the passing of artist Sol LeWitt on April 8, 2007.

Born in Hartford, Connecticut in 1928, Mr. LeWitt created one of the four commissioned artworks on display in the United States Holocaust Memorial Museum.

Just as the architecture of the Museum building draws much of its power from the history of the Holocaust, so the four works of art, displayed in and outside the building, evoke emotion and reinforce the memorial function of the Museum. After visitors have viewed the Permanent Exhibition, chronicling the ghettos and the death camps, they enter the second-floor lounge to encounter a wall drawing by LeWitt titled Consequence.

Five large squares dominate the long wall, with each square bordered in black and containing a gray square outlined with a band of white. In between the white and black contours are subtle colors of varying hues. LeWitt described the square as the most stable and implacable of forms. The rhythmic pattern of squares within squares invites introspection, while the fields of color suggest absence—lives, families, and communities made vacant as a consequence of the Holocaust.