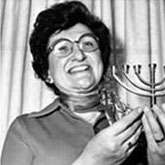 The United States Holocaust Memorial Museum mourns the passing on May 6, 2006, of Sister Rose Thering, a passionate voice against antisemitism and a pioneer in Catholic-Jewish relations.

A Dominican nun from Wisconsin, Sister Rose submitted her dissertation to the St. Louis University in 1961 on the negative portrayal of Jews and Judaism that was widespread in Catholic teaching materials. The results of her scholarship were shared with Cardinal Augustin Bea in Rome, who was then preparing the statement on the Jews that would be submitted to the Second Vatican Council. Nostra Aetate, the final statement on the Jews approved by the Council in October 1965, repudiated the deicide charge against Jews and acknowledged the validity of the Judaic faith, thereby opening a new era in Catholic-Jewish understanding.

Sister Rose became a professor of Jewish-Christian studies at Seton Hall University and a regular participant in interreligious forums throughout the world. She strove not merely to create understanding but to educate Catholics about the Jewish faith. Whether leading groups to visit Israel or speaking to elementary schoolchildren, interfaith audiences, or college classes, she was an energetic and engaging advocate of interreligious respect and good will. The recipient of more than 80 humanitarian awards, she was honored in the acclaimed 2004 documentary film Sister Rose’s Passion, which portrayed her fight against anti-Jewish prejudice and explored the legacy of her work throughout the Catholic Church.

In a presentation on Nostra Aetate at the Museum in December 2005, scholar Judith Banki said

“[Sister Rose was] a feisty nun who carried out the first self-study of Roman Catholic textbooks and teachers' manuals in terms of how they portrayed Jews and Judaism. And that study provided the basis of the American Jewish Committee's first initiative to the Vatican Council.”

Sister Rose dedicated her life to the words and spirit of Nostra Aetate. She remains an inspiration to all people who seek to eradicate the barriers of ignorance and prejudice between different faiths.