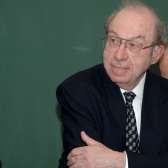 We mourn the passing of Professor Raul Hilberg, world-renowned scholar, founder of the academic field of Holocaust studies, and a key figure in the establishment and development of the United States Holocaust Memorial Museum.

Born in Vienna, Raul Hilberg fled Austria with his family in 1939 and arrived in the United States via Cuba. He returned to Germany after the war as a US Army infantry soldier and participated in its occupation. A graduate of Colombia University’s Public Law and Government Program, he earned a PhD under the direction of Franz Neumann. He participated in the US government’s microfilming operation at the “Torpedo Factory” in Alexandria, Virginia, which preserved copies of millions of pages of Nazi records seized by the US Army. These microfilms became the basis of most Holocaust research for the next 30 years, shaping a generation of scholarship and becoming a model for the Museum’s effort to “rescue the evidence” of the Holocaust through archival microfilming.

Professor Hilberg spent most of his teaching career as a professor of political science at the University of Vermont. His three-volume The Destruction of the European Jews, first published in 1961, is still considered the most comprehensive study of Hitler’s “Final Solution.” The book was continuously revised and updated by the author to incorporate new information and was translated into several languages. His other works, including Perpetrators, Victims, Bystanders—The Jewish Catastrophe 1933–1945 (1992) and Sources of Holocaust Research (2001), helped establish the parameters and approaches through which scholars continue to expand our understanding of the Holocaust. In recognition of his extraordinary intellectual achievements, he was named a fellow of the American Academy of Arts and Sciences in 2005.

Professor Hilberg made a central contribution to the creation and development of the United States Holocaust Memorial Museum. He was an original member of the President’s Commission on the Holocaust (1978–79) and served on the United States Holocaust Memorial Council from 1980 through 1988. He also served on the Museum’s Academic Committee from its inception through 2005 and made foundational contributions to the development of the Museum’s Center for Advanced Holocaust Studies. He generously shared his time and experience with Museum staff and visiting scholars, mentoring both established and new scholars, helping them both to address research issues and to refine their teaching techniques. In 2005, he delivered the Museum’s 11th Joseph and Rebecca Meyerhoff Annual Lecture.

To honor the unique contribution Professor Hilberg made to the field of Holocaust studies and to the United States Holocaust Memorial Museum, the Museum has established the Raul Hilberg Fellowship to support the development of new generations of Holocaust scholars. His legacy endures through the work of the Museum and the countless scholars whose lives he touched.