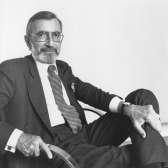 James Ingo Freed, the architect who designed the United States Holocaust Memorial Museum, was born in Essen, Germany, in 1930. At the age of eight, he was evacuated from Europe with his younger sister, Betty. They settled in Chicago at the end of 1939, where they were later joined by their parents.

Mr. Freed studied architecture under Ludwig Mies van der Rohe at the Illinois Institute of Technology, receiving a bachelor’s degree in architecture in 1953. In 1956 he joined the office of I. M. Pei (now Pei Cobb Freed & Partners). From 1975 to 1977, he served as dean of the College of Architecture, Planning, and Design at the Illinois Institute of Technology, and he also taught at Cooper Union, Cornell University, the Rhode Island School of Design, Columbia University, and Yale University.

Over the course of his career, Mr. Freed received several honorary degrees and awards, including being elected to the College of Fellows of the American Institute of Architects in 1977 and winning the Arnold W. Brunner Memorial Prize in architecture from the American Academy of Arts and Letters in 1987. The American Institute of Architects bestowed upon him the National Honor Award in 1988 for his design of the Jacob K. Javits Convention Center and in 1994 for his design of the United States Holocaust Memorial Museum; the First Annual Thomas Jefferson Award for Public Architecture in 1992; and the Presidential Citation for Lifetime Achievement in 1998. In 1995 the National Endowment for the Arts awarded him the National Medal of Arts, the highest honor the United States Government gives to artists.

Freed, James Ingo. The United States Holocaust Memorial Museum mourns the passing of world-renowned architect James Ingo Freed. The Museum, which he designed, is an enduring legacy and a monumental achievement, receiving the American Institute of Architects National Honor Award in 1994. Freed was a witness to Kristallnacht as a young boy in 1938 in his home town of Essen, Germany, and he escaped to the United States in 1939. His architectural genius is evident in the Museum's evocative design, which integrates the memorial experience throughout the building. He has given the world an emotionally powerful “resonator of memory” that has deepened the educational impact of the 23 million individuals who have visited the Museum from all over the world. We will be forever grateful to his singular contribution to the memory of the victims and to the education of future generations.