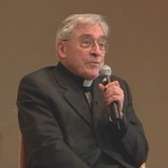 The United States Holocaust Memorial Museum mourns the passing of Cardinal Jean-Marie Lustiger, archbishop emeritus of Paris. Born Aaron Lustiger in Paris to a Polish Jewish family who had settled in France before the first world war, he was sent to live with a Christian family in Orléans after the Germans occupied France in 1940. He converted to Catholicism in 1940, at the age of 13. His parents were deported and his mother was murdered in Auschwitz.

Cardinal Lustiger was educated at the Sorbonne and the Catholic Institute of Paris and was ordained a priest in 1954, at the age of 27. From 1954 to 1959, he served as chaplain of the University of Paris. In 1959, he became director of the Richelieu Centre, which trains university chaplains, and in 1969 he assumed the position of pastor of the Church of Sainte-Jeanne-de-Chanta in the XVIe arrondissement of Paris. He served as bishop of Orléans from 1979 to 1981 and as archbishop of Paris from 1981 to 2005. In 1983 he was elevated to the position of cardinal.

Although he rarely spoke publicly about his personal history, Cardinal Lustiger’s life and work illustrated his deep respect for both Judaism and Catholicism. He strove constantly to build bridges of interfaith and interethnic understanding and was an outspoken opponent of racism and antisemitism.

In conjunction with the World Jewish Congress, Cardinal Lustiger cofounded the Yahad-In Unum association, which promotes Jewish-Catholic cooperation, joint social relief programs, and common moral values throughout Europe. With his personal support and encouragement, Yahad-In Unum undertook a project to identify and mark hundreds of previously unknown mass graves of Jews murdered in the Ukraine during the Holocaust and to take testimonies from still living eyewitnesses of mass shootings of Jews. The Museum is working closely with Yahad-In Unum on this and related projects.

For Cardinal Lustiger, the Holocaust was the seminal event in European history, and he believed it was crucial to honor and remember the dead. In March 2006, he visited the Museum, where he met with Jewish and Christian interfaith leaders and delivered a public lecture, in which he said:

“The tragic experience of the Shoah teaches humankind a lesson: that it is called to live up to its dignity and greatness. This is something the generation of the survivors has borne witness to: by their love of peace and kindness toward all humans, these men and women have manifested that dignity and greatness of life, because they knew that hatred leads to death.”