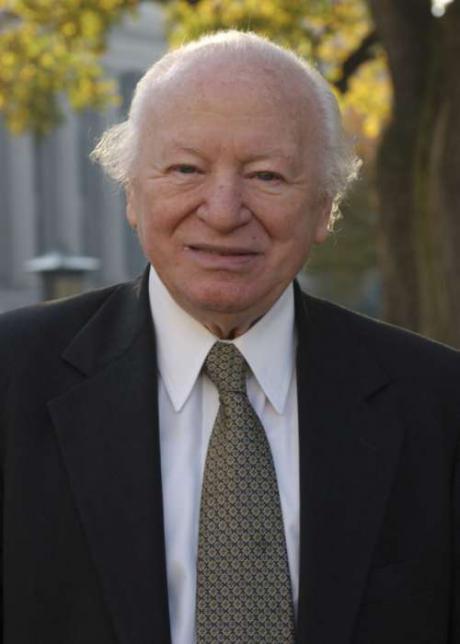 The Museum mourns the passing of Benjamin Meed, Holocaust survivor, leader of the survivor community and a founding father of the Museum. He devoted his life to Holocaust remembrance and education, leading the effort to create a worldwide community of survivors and to establish annual Holocaust commemorations throughout the United States. Mr. Meed’s extraordinary vision and dedication were an inspiration to many and his tireless work created an extensive and meaningful legacy.

Born in 1918 in Warsaw, Ben Meed was in business school when World War II erupted. Within a short time he was living in the Warsaw ghetto and working as a slave laborer. Recruited into the underground by his future wife, Vladka, whom he met in the midst of the war, he was responsible for rescuing ghetto fighters and finding and building hiding places for them. Ben and Vladka were among those Jews on the “Aryan” side of the ghetto wall who distributed the April 23, 1943, appeal from the Jewish Fighting Organization. The couple married shortly after the war, and in 1946 they immigrated to the United States to rebuild their lives. Mr. Meed eventually opened a successful import-export business and they raised two children. Ben and Vladka formed an extraordinary, lifelong partnership that would endure for decades.

The Meeds helped plan the 1981 World Gathering of Jewish Holocaust Survivors held in Israel, the first event of its kind. That same year, the organizers established the American Gathering of Jewish Holocaust Survivors to prepare for a 1983 gathering in Washington, DC, which attracted 20,000 survivors and their families. Mr. Meed served as president of the American Gathering from its inception until his death.

He was also deeply committed to teacher training, as he and Mrs. Meed, through the American Gathering and the Jewish Labor Committee, created the Summer Seminar Program on Holocaust and Jewish Resistance.

Mr. Meed served on the Advisory Board of the President’s Commission on the Holocaust, which recommended the Museum’s establishment. He also served on the United States Holocaust Memorial Council, the Museum’s governing body, from 1980 to 2004, where he chaired several committees, including the Days of Remembrance Committee and the Museum Content Committee, which oversaw the creation of the Museum’s Permanent Exhibition. He was responsible for institutionalizing Holocaust commemorations in the nation’s capital, at state houses and cities across the country, and at military installations worldwide.

In November 2003, in honor of the Museum’s 10th anniversary, Mr. Meed conceived the Tribute to Holocaust Survivors: A Reunion of a Special Family, which honored survivors, liberators, and rescuers, along with their families. More than 7,000 people, four generations strong, traveled to Washington from 38 states and around the world to take part in the largest Museum event, at the time, since its opening.

“We now pass our torch onto our children and to their children and beyond,” Mr. Meed said at the Tribute. “The torch of memory is precious. It can illuminate the world.”

Mr. Meed leaves a powerful and unique legacy for all of humanity. The Museum offers its sincere condolences to Vladka, a cherished friend of the institution, Anna and Steven, their children, his sister Genia, the entire Meed family, the American Gathering of Holocaust Survivors, and the survivor community.

“We must tell our story to be worthy of the memory of our six million martyrs who cannot speak for themselves.”
— Benjamin Meed