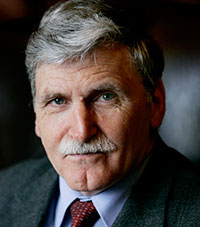 The Museum bestowed the 2014 Elie Wiesel Award on Canadian Lieutenant-General Roméo Dallaire in recognition of his valiant attempts to warn the world of and prevent the 1994 genocide in Rwanda, despite enormous apathy and opposition from the UN, the United States, and the rest of the international community.

In 100 days, between 500,000 and one million Rwandans, predominantly Tutsis, were massacred when a Hutu extremist–led government launched a plan to wipe out the country’s entire Tutsi minority and any others who opposed their policies.

Marking the 20th Anniversary of the Rwandan Genocide

This year, as we mark the 20th anniversary of the Rwandan genocide, we honor the moral courage and physical bravery of a frontline soldier who helped save the lives of tens of thousands of victims.

This singular achievement, together with his ongoing humanitarian efforts on behalf of those affected by genocide, makes Lieutenant-General Dallaire a rare and important example of the kind of leadership our world so desperately needs.

The Museum presented the award to Lieutenant-General Dallaire on April 30, 2014, at our annual National Tribute Dinner, held in conjunction with our national Days of Remembrance events in Washington, DC. Samantha Power, US Permanent Representative to the United Nations, delivered the keynote address.

The Moral Obligation to Speak Out

As commander of the 2,600-member international peacekeeping force, Lieutenant-General Dallaire did his utmost to warn his UN superiors of the risks of large-scale ethnic violence. In a series of cables to New York in late 1993 and early 1994, he called for a broader interpretation of the UN mandate to permit the protection of civilians and a crackdown on extremist militia groups. His requests were ignored or rejected, and his force remained undermanned and under-resourced.

One day, sooner than later, if we become activists for humanity, we will no more resort to conflict due to the frictions of our differences.

When the genocide erupted in April 1994, Lieutenant-General Dallaire argued for the vigorous use of international force, including a strengthening of his troops. The UN Security Council chose instead to withdraw most of his men, leaving behind just over 450. Unable to stop the worst atrocities, Lieutenant-General Dallaire and his unit nevertheless managed to save the lives of some 30,000 Rwandans.

The then-48-year-old general remained in Rwanda throughout the 100-day genocide, a witness to the cold-blooded murder of as many as one million Rwandans. Many of these murders took place in full view of UN peacekeepers, as neighbor set upon neighbor with knives and machetes.

Lieutenant-General Dallaire returned to Canada traumatized by his experiences but felt he had a moral obligation to speak out about the horrors he had witnessed. He appeared as a prosecution witness at the International Criminal Tribunal for Rwanda and authored a much-praised account of the Rwandan genocide, Shake Hands with the Devil: The Failure of Humanity in Rwanda. His book inspired the Emmy Award–winning documentary and the major motion picture of the same name.

The recipient of numerous honors and awards, he is a retired lieutenant-general and has served in the Canadian Senate since 2005.

Lieutenant-General Dallaire is a longtime friend of the Museum and has shared his extraordinary experiences in a number of Museum programs over the years. View his eyewitness testimony or read the transcript of his 2002 Museum interview with Ted Koppel.