The US Holocaust Memorial Museum revoked Aung San Suu Kyi's Elie Wiesel Award on March 6, 2018. Read the Museum's letter to her about that decision. Learn more about the Museum's work on Burma. 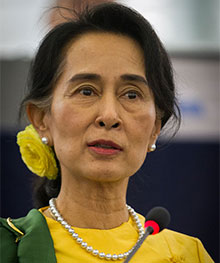 The Museum bestowed the 2012 Elie Wiesel Award on Nobel laureate Aung San Suu Kyi for her courageous leadership and great personal sacrifice in resisting tyranny and advancing the freedom and dignity of the Burmese people.

Aung San Suu Kyi is recognized internationally as a leading advocate for human dignity. As the general-secretary of the National League for Democracy, she bravely led a movement of nonviolent civil disobedience as a means of resisting the military dictatorship, which violently crushed all opposition since it rose to power in 1962.

Freed from house arrest in November 2010, she was permitted to run for office in the 2012 parliamentary election. On April 1, 2012, she won a seat in the parliament, a milestone in the history of Burma and the advancement of freedom.

Few leaders have done so much, for such a long period, for the honor of true democracy.

“Aung San Suu Kyi is an extraordinary woman whose battle for her people’s freedom remains an inspiration to many others,” said Elie Wiesel. “Few leaders have done so much, for such a long period, for the honor of true democracy. The Museum’s decision to honor her will remain a source of pride to those who believe in memory’s power to vanquish injustice.”