Origins of Neo-Nazi and White Supremacist Terms and Symbols

The eruption of neo-Nazism and White Supremacy across the country has exposed the public to symbols, terms, and ideology drawn directly from Nazi Germany and Holocaust-era fascist movements.

The leaders of today’s Neo-Nazi and White Supremacist organizations are not Adolf Hitler, and America is not Germany, but, in order to understand their agenda, it is vital to understand the history of these code words, symbols, and ideologies. See more resources for confronting hate below.

For centuries, flags have served as symbols of national pride. People also use them to show allegiance to a specific cause or movement. The most widespread Nazi flag featured a black swastika in a white circle on a red field. Other official flags were also displayed during the Nazi regime. The German armed forces, for example, flew a modified version of the much older Imperial Reich war flag. That flag featured horizontal and vertical black bands intersected by the Prussian eagle. It also included an iron cross, a traditional German military decoration. In the Nazi version, the swastika replaced the eagle and the background was changed to red.

Hitler was obsessed with race long before becoming Chancellor of Germany. His speeches and writings spread his belief that the world was engaged in an endless racial struggle. White Nordic people topped the racial hierarchy; Slavs, Blacks, and Arabs were lower, and Jews, who were believed to be an existential threat to the “Aryan Master race,” were at the very bottom. When the Nazis came to power, these beliefs became government ideology and were spread publicly in posters, radio, movies, classrooms and newspapers. They also served as a basis for a campaign to reorder German society, first through the exclusion of Jews from public life, then the murder of disabled Germans as well as Slavs and, ultimately, the effort to exterminate European Jewry. 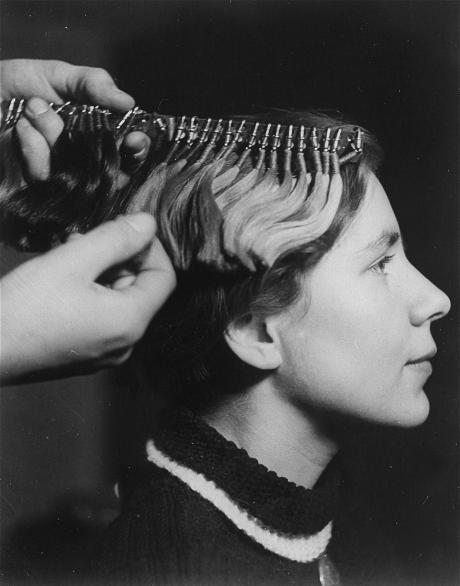 A technician determines the racial makeup of a young woman by the color of her hair. —Courtesy of bpk-Bildagentur 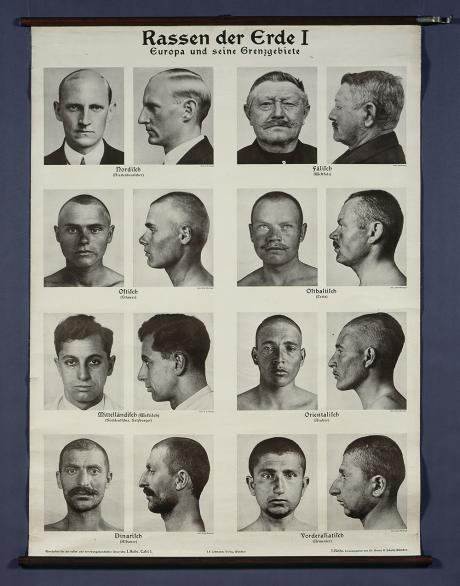 “Blood and Soil” (Blut und Boden) was an early Nazi slogan used in Germany to evoke the idea of a pure “Aryan” race and the territory it wanted to conquer. The concept was foundational to Nazi ideology and its appeal, though it predates the Nazi regime. Blood referred to the goal of a “racially pure” Aryan people. Soil invoked a mystical vision of the special relationship between the Germanic people and their land. It was also a tool to justify land seizures in eastern Europe and the forced expulsion of local populations in favor of ethnic Germans. The term was a rallying cry during the 1920s and early 30s when the Nazis and other far right political parties were in opposition to the fledgling Weimar democracy. 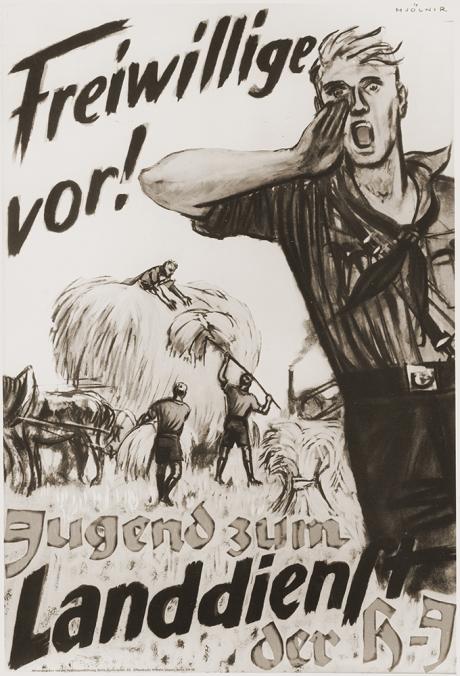 Poster urging young Germans to join the Hitler Youth Landdienst [agricultural service]. It reads "Volunteers to the front! Youth to the land service of the Hitler Youth." —Courtesy of bpk-Bildagentur 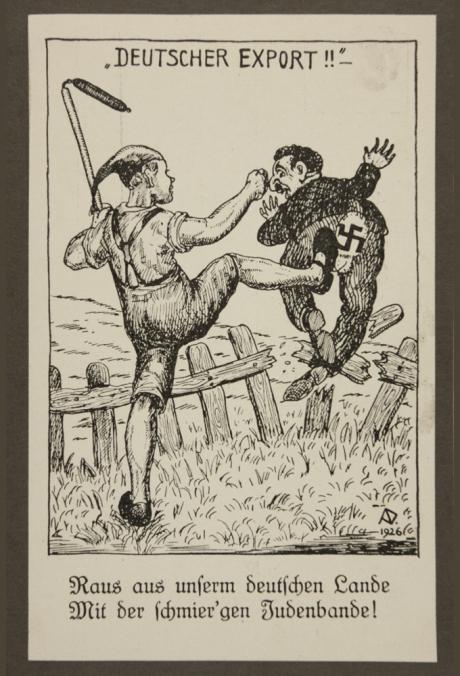 Antisemitic propaganda of an agricultural worker kicking a stereotypically depicted Jewish man through a fence. It reads "German export: Out of our German country with the slimy Jewish band." —Courtesy of Dottie Bennett

In order to make Jewish persecution publicly palatable, Nazi propagandists branded Jews as a biological threat to Germany. Government-sponsored racist propaganda was widely distributed denouncing Jews as “alien,” and “parasitic,” and responsible for Germany’s cultural, political, and economic “degeneration.” These words had an enormous effect, creating an environment in which persecution and violence were acceptable. Students burned books by Jewish authors on pyres and purged works of art and music by Jews and others considered “un-German.” Much worse, Jews became less human in German eyes, and less worthy of society’s protection.

The term “ethnic cleansing” has been used in recent decades as a euphemism for forcing one group of people from their homes—or even killing them—to create a “racially pure” area for another group. The effects have been devastating in places such as the former Yugoslavia, where more than 100,000 people were killed in the 1990s, most of them Bosniak Muslims. The Nazis used a similar euphemism, Säuberung, which means purging or cleansing, to refer to efforts to systematically murder the Jews of Europe.

‘Heil’ and the Nazi Salute

After the Nazi rise to power in Germany in the 1930s, it became common for Germans to greet each other with a stiff-armed salute and the words “Heil Hitler.” The “German Greeting,” as it became known, was a ritual of the cult of Adolf Hitler. Under the Nazi regime, Germans were expected to pay public allegiance to the “Führer” (leader) in quasi-religious forms. For example, they even saluted statues of Hitler.

In the 1920s and 1930s, Nazis were, in part, defined by their opposition to communism. After the 1917 Bolshevik Revolution in Russia, Germany seemed vulnerable to the spread of communism, particularly after a communist uprising in Berlin. The Weimar democratic government was unstable, and its economy was in shambles. In their struggle against socialists and communists, fascists and other right-wing groups exploited the fact some prominent communists were Jews to harness antisemitism for their cause. Longstanding false links between Jews and Communism also underscored antisemitic conspiracy theories about Jewish global domination. 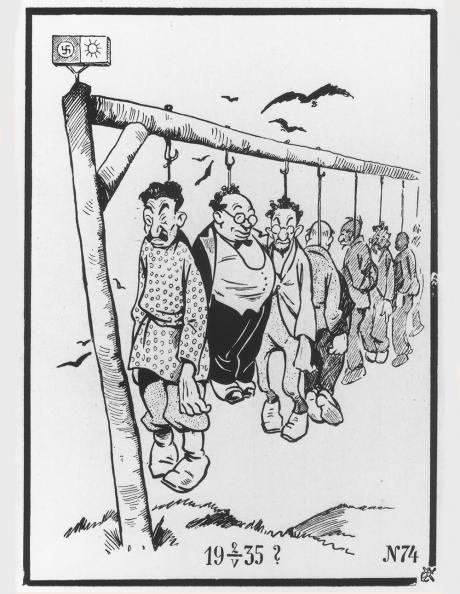 Cartoon depicting Jews, communists, and other enemies of the Nazis hanging on a gallows, 1935. —Courtesy of The Wiener Library for the study of the Holocaust & Genocide 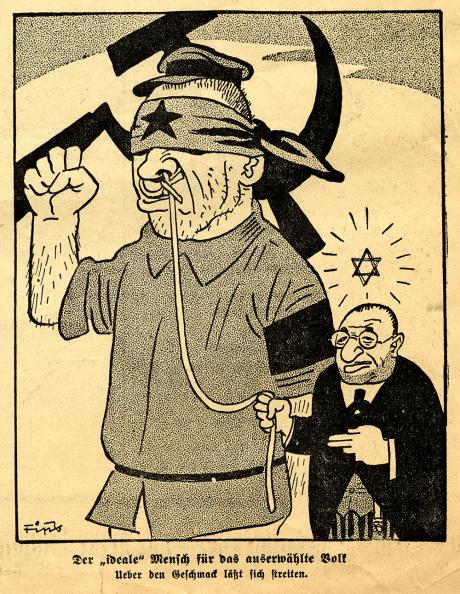 Antisemitic cartoon showing a Jew leading a Soviet official by a leash. It reads "The 'ideal' person for the chosen people: There’s no accounting for taste." —Courtesy of Frank Liebermann

The Nazis were deliberate in their use of graphic design and color in ways we might today call branding. Adolf Hitler created the flag himself, borrowing the colors of the German Empire that fell at the end of World War I, and implicitly rejecting democracy by harkening back to authoritarian rule. The colors and design appear in countless Nazi flags, posters, armbands, and other insignia, falsely conveying continuity between the “glorious” imperial past and the Nazi regime. Hitler wrote: “In red we see the social idea of the movement, in white the nationalistic idea, in the swastika the mission of the struggle for the victory of the Aryan man.” 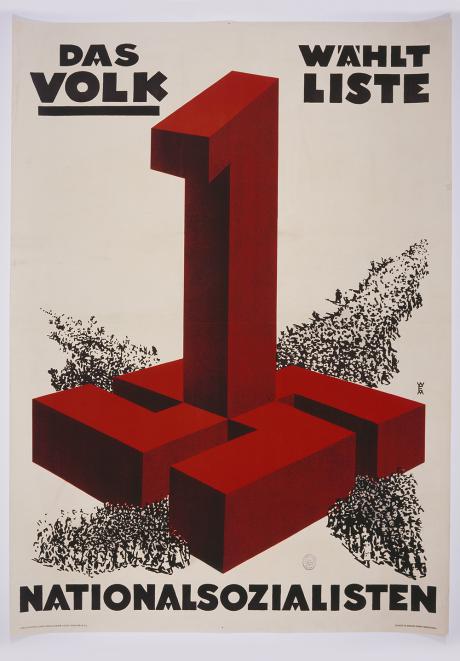 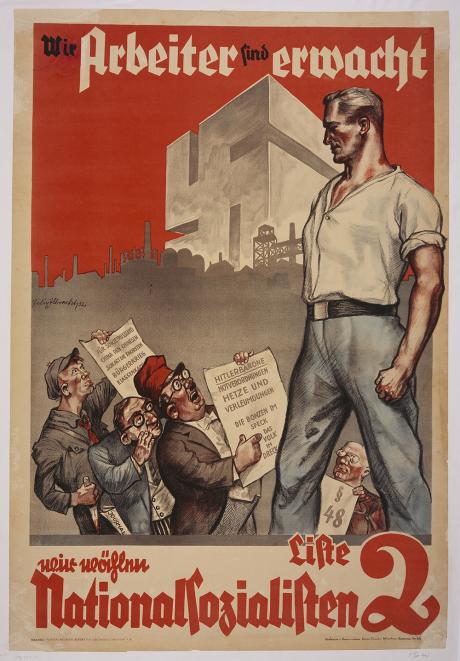 The swastika has an extensive history and enduring power, predominantly as a symbol of hate. It was used at least 5,000 years before Adolf Hitler appropriated it for the Nazi flag featuring a black swastika at its center. The word derives from the Sanskrit svastika, which means “good fortune” or “well-being.” Closely identified with “Aryan” civilization in India (referring to Indo-European settlers as opposed to the indigenous population), the swastika was adopted by right-wing groups in early 20th century Germany to represent the racial superiority of “Aryans” whom they equated with “Nordic” or “German-blooded” people in contrast to Jews and other minorities. It is used almost exclusively to invoke Nazi tyranny and intimidate anyone who does not subscribe to white supremacist views.

The Nazis were masters of propaganda who regularly used torches and fire in spectacles to create drama and show force. Torchlight marches were a frequent and carefully staged feature of Nazi rallies. On January 30, 1933, torchlight parades announced the onset of the Nazi regime as Adolf Hitler became chancellor of Germany. The famous Leni Riefenstahl film Triumph of the Will featured dramatic footage of torch bearers at a 1934 Nazi Party rally in Nuremberg marching in choreographed formation to form a massive human swastika. In addition, at the 1936 Berlin Olympics, as part of a calculated strategy to link their racist vision with a more ancient past, the organizers reintroduced the ritual of the torch relay to light the Olympic flame.

Nazi propagandists built on existing stereotypes and antisemitic beliefs to directly link Jews to the spread of disease and pestilence. As part of their racial campaign to “cleanse” society, Nazi leaders implemented “racial hygiene” policies to “protect” non-Jews. For example, in occupied Poland, the Nazis reinforced their policy of confining Jews to ghettos by portraying them as a health threat requiring quarantine, while creating a self-fulfilling prophecy by severely limiting access to food, water, and medicine to those imprisoned there. German “educational” films shown to thousands of Polish school children characterized “the Jew” as a carrier of lice and typhus.