In his book Autobiography of a Recovering Skinhead, Frank Meeink describes with brutal honesty his descent into bigotry and violence as a teenage neo-Nazi. Through some surprising personal encounters, Meeink came to reject his beliefs and become an advocate for tolerance and diversity. 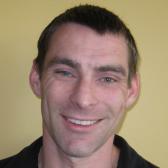 In his book Autobiography of a Recovering Skinhead, Frank Meeink describes with brutal honesty his descent into bigotry and violence as a teenage neo-Nazi. Through some surprising personal encounters, Meeink came to reject his beliefs and become an advocate for tolerance and diversity.

ALEISA FISHMAN:
In his book Autobiography of a Recovering Skinhead, Frank Meeink describes with brutal honesty his descent into bigotry and violence as a teenage neo-Nazi. Through some surprising personal encounters, Meeink came to reject his beliefs and become an advocate for tolerance and diversity. His story is a warning about how alienated young people can easily be drawn into hate groups.

Welcome to Voices on Antisemitism, a podcast series from the United States Holocaust Memorial Museum made possible by generous support from the Elizabeth and Oliver Stanton Foundation. I'm Aleisa Fishman. Every month, we invite a guest to reflect about the many ways that antisemitism and hatred influence our world today. Here's Frank Meeink.

FRANK MEEINK:
Yeah, I got into the white supremacist movement when I was about 14. I went from living in my mom's neighborhood in South Philly to my father's neighborhood up in Southwest Philly and I had to change schools, and the school I went to was mainly an all black school, where the white kids had to fistfight a lot. And that summer I went up to Lancaster, Pennsylvania, where my cousin lived, and he was part of this skinhead thing. And I was just completely attracted to it in a way.

You know these guys, when I first started coming around, would talk to me and ask me basically how my life was. And I was never asked those things by my parents. I was never asked "How was school today, son?" or "How was math class today?" "Do you have a girlfriend?" I mean I was just kind of there. I was a mistake between two young drug addicts, and I was thrown back and forth and just…not a great home life.

So, one night, when we went to one of them concerts and everyone was fearing the skinheads and I'm standing with them and I still have hair on my head, that night after we got done with the concert everyone was talking about the fights and about how they had to protect me because I had hair on my head. And this one guy just said, "Yo, when are you gonna shave that crap off your head?" And that was it. Now again, I don't want to give them like they were these genius recruiters. They were just older males, 16…17 year-old kids who wanted more numbers and liked me. And when you don't have much at home, anyone that gives you even a Saltine, it sure does fill that appetite.

Violence was our camaraderie. Your camaraderie is to go out and cause harm to other individuals. And we hated anyone that wasn't us. If you didn't believe what we believed, you were our enemy. And anyone could be a victim. That was how we got our loyalty to each other. That's how we felt stronger in our pack, is when we did horrible things to other human beings. And it could be from going to the homeless section in Philadelphia and beating people up like they do in the movie A Clockwork Orange, or going and spray painting a synagogue. And we did it, for one, to feed the beast of us and to feed the beast of the media that we knew would feed off of us and help us get more recruits. And when you live by your ego, and that's what people that are haters do—they live by this ego and not self-esteem—so when the media and other people can feed into your ego of this group, then that's how it keeps growing. And once you become an ego-maniac with low self esteem and it's in a pack, you're the most dangerous people in the world.

In the spray painting and the vandalism, you know I never felt guilt. And you know it's sad to say, and people will be mad at me for saying it, but I just didn't. It felt good to be doing things with my mates, and anything that looked cool with them was what I did. But the violence, out of the 200, 300 acts of violence that I was part of in the movement, 90 percent of it, I never once felt a thing. I mean, in fact, I enjoyed it. Maybe because I was beat as a kid, I don't know. I was beat pretty severely as a kid. And I remember there being times where I would put my stepfather's face, mentally placing his face, on our victims, and that's why every kick and punch felt so good. And I know that sounds sick to people, but that's what it was. "It is what it is," as they say. But there was times I remember when we would get done and I would look down at another human being and think, that could have been one of my uncles going to college. Or that could be a friend. But very quickly I would wash that away from my brain, because I don't want to feel guilt. I don't want to feel that feeling, you know?

I was a racist thug, but God, science, and nature kept consistently proving my beliefs wrong to me. I had come to the conclusion that blacks and Asians and Latinos and whites—that okay, we all gel, I can admit that. But I'm still going to hate the Jews, because, I put it to this, people will hate what they don't understand. It's the quickest defense. So I never knew any Jewish people, so I said "You know what? I'm still going to hate them because what I believed for so long"—I mean it was only five years, but—"what I believe cannot be all completely wrong. There's got to be something right in here." And I'm holding on to this last hatred of Jewish people, and then a Jewish guy gives me a job and no one would hire me. I had a big swastika tattooed on my neck. These ain't good people skills. So this Jewish guy gives me a job working at an antique show. So I worked for him all weekend and he's supposed to pay me $100 every day, so he owed me $300. But I made $600 in tips. So I think in my antisemitic way, he was going to come up…he was going to say, "I'm not going to give you money. You already made $600. You should be happy with that." So I already have this whole argument planned out, how I'm going to scream this at him, he'd going to say this back at me. And he walks up to me and he says, "Here, here's $200, here's $300. Here's what I owe you." And he says, "You know what? Here's an extra hundred bucks. You're a really good worker." And when he pays me this extra $100, all I can think in my head was, "You son of a gun. You're ruining it." Because I didn't want to be wrong. A nineteen-year-old kid does not want to believe that what he believes is wrong. It hurts the conscience.

And then he gave me a ride back to Philly and he said, "Hey, what do you do for a living?" And I said, "Nothing." And he said, "Why don't you come work for me?" And then I look down, I had my Doc Martins on with my red laces, which meant I was a neo-Nazi, and I was just truly embarrassed, so embarrassed of my beliefs. This was it. I was completely wrong and I had to admit it. And I went to work for this extremely great man.

How can normal people or people who are trying to work against these beliefs help someone who might be getting into it, is first and foremost always, always treat the person with respect. The minute you try to make me feel dumb or make me feel that my beliefs are stupid—because I'm trying to talk as a 14-year-old kid here—I'm going to lash out. Maybe not physically right at you right away, but you lost me. So we need to treat people with respect, and understand that them getting to know somebody is what's going to work. You know they can't always hate if they know that there's a person who's reached out to them in a loving and kind way. And that's what we need to do.

ALEISA FISHMAN:
Frank Meeink now teaches hockey and conflict resolution to young people. He had his swastika tattoo removed by a doctor who lost family in the Holocaust.

Voices on Antisemitism is a podcast series of the United States Holocaust Memorial Museum. Join us every month to hear a new perspective on the continuing threat of antisemitism in our world today. We would appreciate your feedback on this series. Please visit our website, www.ushmm.org.