Why the Jews: History of Antisemitism 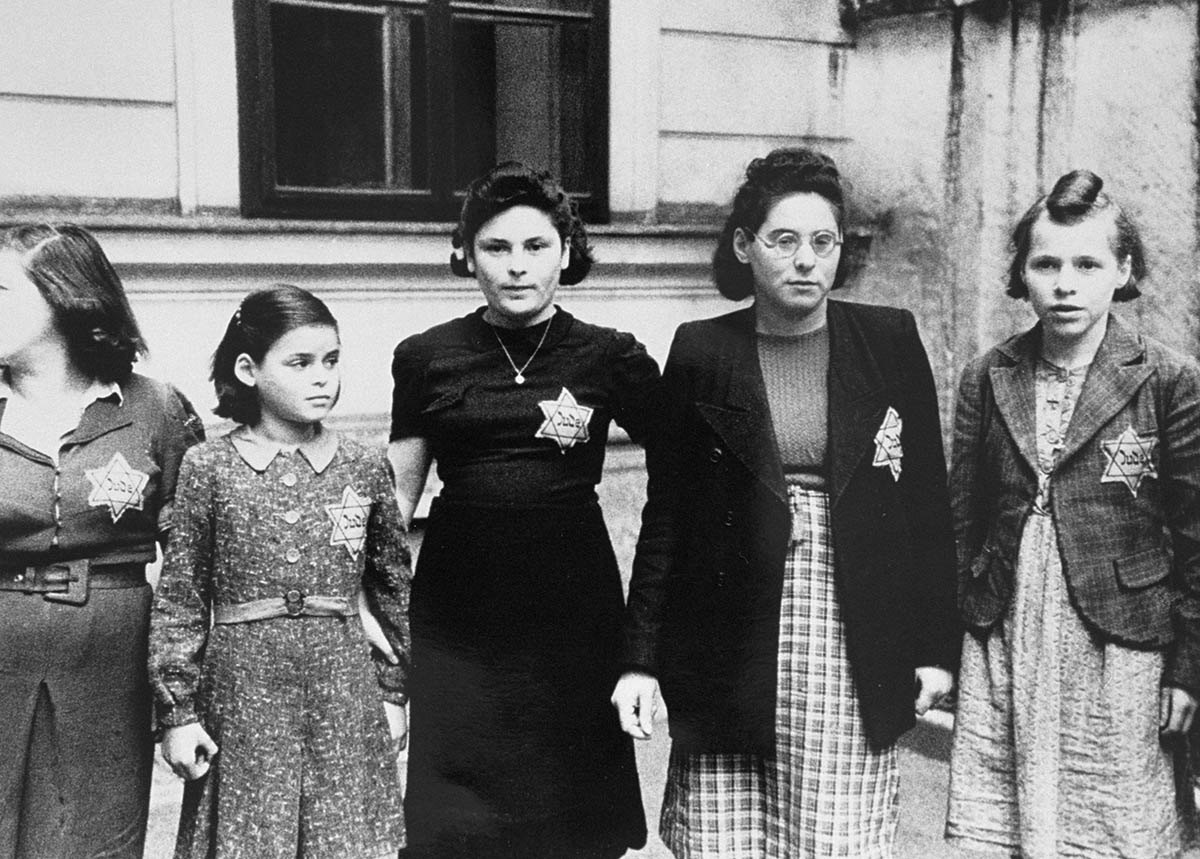 This 13-minute film introduces the history of antisemitism from its origins in the days of the early Christian church until the era of the Holocaust in the mid-20th century. It raises questions about why Jews have been targeted throughout history and how antisemitism offered fertile ground to the Nazis.

[Narrator]
Between 1939 and 1945, the Nazis killed about six million Jews and millions of other civilians throughout Europe.

These are some who were slaughtered in the Holocaust—a generation lost forever.

[Text on screen]
EUROPEAN ANTISEMITISM FROM ITS ORIGINS TO THE HOLOCAUST

[Narrator]
Jews are the people of the Hebrew Bible who lived in a land now known as Israel. They believe that there is only one God.

Christianity emerged from Judaism. Jesus of Nazareth was a Jew who preached a singular religious message. The first Christians were Jews who prayed in Hebrew and observed the customs and religious rituals of Judaism. The Last Supper was a Jewish religious meal, probably at Passover.

Jesus was put to death at the hands of Roman authorities under Pontius Pilate in Judea, but the gospel accounts were interpreted as blaming all Jews for the crucifixion. To his followers, Jesus was the Christ, the Messiah. His death, sacrificial atonement. Most Jews believed the Messiah had not yet come. Redemption was not at hand.

Soon after the crucifixion, Roman armies destroyed the Temple in Jerusalem. Jews were exiled and scattered—to live as a dispersed minority. By the 5th century, Christianity had become the dominant religion in the Roman Empire.

The early Christian church portrayed Jews as unwilling to accept the word of God; illuminations showed Satan binding the eyes of the Jews. Some church leaders intensified the charge—condemning Jews as agents of the devil and murderers of God. The accusation was not renounced until the 1960s when the Second Vatican Council officially repudiated the ancient charge that Jews had murdered Christ.

For centuries, state and Church laws restricted Jews, preventing them from owning land and holding public office. Guilds excluded Jews from most occupations, forcing them into pursuits like money-lending, trade, commerce. Excluded from Christian society, Jews maintained their religious and social customs.

In 1095, Pope Urban II called for the liberation of Jerusalem. Christian crusaders set off to free the Holy Land from the Muslims. On the way, they slaughtered thousands of Jews.

Throughout the Middle Ages, Christians persecuted Jews. Portrayed as alien, Jews were regarded as usurers. It was said Jews poisoned the wells of Europe, causing the Black Plague. Illustrations depicted Jews as the devil, with horns and cloven feet, and showed them using the blood of Christian children in ritual sacrifices. These lies came to be taken as truth.

But where they were needed, Jews were tolerated. When they were allowed to participate in the larger society, Jews thrived.

In many places, secular and religious states forced Jews into segregated districts later called ghettos. England, France, Spain, Portugal, and many German states expelled masses of Jews—most of whom migrated eastward taking with them their religious convictions and traditions.

In 1517, Martin Luther attacked the Pope and corruption within his own Roman Catholic Church, beginning the Protestant Reformation. The young Luther hoped that tolerance would persuade Jews to convert. But when Jews adhered to their own religious beliefs and refused to join his new reformed church, Luther’s disappointment turned to hatred.

What then shall we Christians do with this rejected and condemned people, the Jews? . . .Their synagogues . . .should be set on fire, and what does not burn must be covered over with earth so that no man will ever see stone or cinder of them again. . . .Their houses also should be razed and destroyed. . . . All their prayer books. . .should be taken from them.

The Protestant Reformation brought no end to the anti-Jewish tradition of Christianity.

With the 18th century Enlightenment’s emphasis on reason, the domination of the Church diminished. Some Enlightenment thinkers called for full rights for Jews, but only on the condition that they discard their religious customs. Others blamed Judaism as the source of irrational religious faith.

Even though many Jews assimilated socially and culturally, prejudice did not disappear.

In France in 1894, Captain Alfred Dreyfus, the only Jewish member of the French Army’s general staff, was convicted of passing military secrets to Germany. Later, proof of forgery confirmed his innocence, but Dreyfus remained the victim of a cover up to divert attention from army corruption. A century after the French Revolution proclaimed Liberty, Equality, and Fraternity, giving Jews their freedom, frenzied mobs in the streets of Paris chanted Death to the Jews.

[Text on screen]
It is not a question of religion. The enemy is JUDAISM!

Nevertheless, freed from some restrictions, many Jews entered the Christian World and became prominent citizens.

Then, around 1900, a new lie was promoted: that Jews conspired to dominate the world using their money and intelligence to manipulate trusting Christians. Russian secret police forged a document to support the story of a take-over plot supposedly authored by a conference of Jewish leaders. A proven forgery, The Protocols of the Elders of Zion was nevertheless translated into every major language and distributed worldwide. It is circulated even today despite indisputable proof that it is a fake.

To divert popular discontent at appalling living conditions and autocratic control, Russian authorities encouraged antisemitic violence. Jews were blamed for the assassination of Czar Alexander II in 1881. Pogroms, murderous rampages against Jews, erupted in Russia many times during the next three decades.

The second half of the 19th century saw the emergence of yet another kind of antisemitism. At its core was the theory that Jews were not merely a religious group but a separate “race”—Semites—set apart because of genetically inherited characteristics.

Antisemites believed racial characteristics could not be overcome by assimilation or even conversion. Jews were said to be dangerous and threatening because of their “Jewish blood.” Antisemitic racism united pseudoscientific theories with centuries old anti-Jewish stereotypes. These ideas gained wide acceptance.

The devastation of World War I, the demeaning peace of Versailles, the hyperinflation of the 1920s, and the depression of 1929 fueled mass discontent.

The presence of Jews in German cultural, economic, and political life made them convenient scapegoats for Germany’s misfortunes.

Enter: Adolf Hitler. Hitler viewed world history as a racial struggle for survival of the fittest. He saw Jews as the source of all evil: disease, social injustice, cultural decline, capitalism and all forms of Marxism, especially Communism.

Antisemitism would become the predominant ideology of the Third Reich.

Nazi racism victimized many groups of people, but it was against the Jews that the Nazi state mobilized all its resources for terror.

After the Nazi takeover of power, anti-Jewish measures were put into effect one after another: Jewish businesses were boycotted, then seized.  Jews were defined, separated from non-Jews. Jews were excluded from professions and studies. Jewish children were barred from schools. Jews were subjected to public humiliation.

The changes—whether gradual or sudden—were incomprehensible. Few could imagine what would happen. Even Jews.

The Nazis took antisemitism to an unprecedented level of violence. Genocide: the systematic murder of millions of people deemed inferior. Six million Jews. These are some of them.

[Text on screen]
In the aftermath of the Holocaust, some Christian churches, including the Roman Catholic and Evangelical Lutheran Church in America, have re-examined their teachings on the Jews and Judaism.

Many denominations are continuing to address the role played by centuries of Christian antisemitism in contributing to circumstances that made the Holocaust possible.

Antisemitism did not end with the Holocaust and persists in Europe, the United States, and around the world today. Efforts to minimize, deny, or even celebrate the Holocaust are among the many ways antisemitism endures.

Hatred of Jews is fueled by myths, lies, and conspiracy theories. Some advocates of religious, political, and racial ideologies continue to exploit the hatred of Jews to achieve their own ends.

As the Holocaust demonstrates, antisemitism often appears alongside other forms of hatred, with potentially devastating consequences for individuals, communities, and nations.

The history of the Holocaust shows that targeting an entire group has far-reaching consequences. It can lead to an increase in xenophobia, racism, and extremism throughout society, with potentially devastating consequences for individuals, communities, and nations.