In her signature poem "Hebrew Mamita," Vanessa Hidary addresses antisemitic stereotypes in her direct, no-nonsense style. In this piece, she unpacks insult-as-compliment antisemitism, and the subtle ways that oppression can get under your skin. 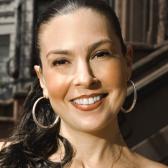 In her signature poem "Hebrew Mamita," Vanessa Hidary addresses antisemitic stereotypes in her direct, no-nonsense style. In this piece, she unpacks insult-as-compliment antisemitism, and the subtle ways that oppression can get under your skin.

ALEISA FISHMAN:
That’s spoken-word artist Vanessa Hidary performing her signature poem "Hebrew Mamita." Like much of her work, "Hebrew Mamita" addresses stereotypes in Hidary's direct, no-nonsense style. In this piece, she unpacks the insult-as-compliment type of antisemitism, and the subtle ways oppression can get under your skin.

Welcome to Voices on Antisemitism, a podcast series from the United States Holocaust Memorial Museum made possible by generous support from the Elizabeth and Oliver Stanton Foundation. I'm Aleisa Fishman. Every month, we invite a guest to reflect about the many ways that antisemitism and hatred influence our world today. From her home in New York City, here’s Vanessa Hidary.

VANESSA HIDARY:
There was a time I think that—though I was always brought up with a sense in my family of being proud of being Jewish—I went through a time, where I just felt in a very simplistic, teenage kind of way that it wasn’t cool to be Jewish. Because I spent so much time in different communities, when it came up that I was Jewish, people were constantly surprised and constantly complimenting me. So whether it was "you’re Jewish; like, oh, well, you don’t really act like that; you’re different; you’re don’t really… you’re not really Jewish-Jewish." Or, "wow, you don’t look Jewish; you’re really pretty." And I realized for a long time I felt a sense of—whether I would admit it or not, I could admit it now—I felt a sense of achievement, as if I had kind of won something. Like, "oh yeah, I didn’t get that, you know, big nose, not attractive, Jewish girl look." And, "oh, I’m not this kind of, you know, greedy, cheap, Jewish person." And so, I had ingested those stereotypes. I didn’t, on an everyday basis, think that it was so strong that I thought of Jews that way. But by me taking it as a compliment, in some ways I did. And so, my kind of signature poem "Hebrew Mamita" came from that, and from me realizing that I had been taking for granted that I could actually live in a country and be in a place where I could be free and be Jewish and not have to defend it and not have to be unsafe because of it. And that was a huge revelation to me.

Okay, so this is my piece called “Hebrew Mamita”:

I meet a guy in a bar that’s cute. He asks me out to dinner for the following Tuesday. I decline. “Tuesday is Yom Kippur. I will be fasting.” “You’re Jewish? Wow, you don’t look Jewish. You don’t act Jewish.” And he says it in this tone that sounds like he’s complimenting me. And I say… and I say… nothing. I say nothing, which combined with a flirty smile translates to "thank you." I say nothing, ‘cause I’m drunk on denial-coladas. I say nothing, ‘cause I got a contact high of someone’s antisemitic crack pipe. I say nothing, because somewhere along my life’s graph, I’ve been swayed to believe that being Jewish is not too cool, not too sexy. I say nothing, ‘cause I’m in deep sleep, a Snow White coma destined to meet my prince five years later in the form of stone in Jerusalem named the Wailing Wall. Lips pressed to cool granite, I place folds of paper with written prayers for the dead in a nook, in a nook in the wall next to a woman with concentration camp numbers tattooed on her forearm. Surrounded by fervent praying and bodies swaying, I am far more awake than I ever thought possible. I suddenly remember the Exodus of the Israelites and I walk barefoot from the Wall in the desert to the bar and look for the guy with the duck boots. He’s not there, but I have something to say to him. He’s not there, but I have a response to his statement. He’s not there, so I make a soapbox and reenact the scene. “Bartender, tell me I don’t look Jewish. Tell me I don’t act Jewish." ‘Cause I’m thinking, I’m saying, what does Jewish look like to you? Should I fiddle on a freaking roof for you? Should I humor you with oy veys and refuse to pay? Oh, ‘cause you know how we like to "Jew you down." "Jew you down," I’d like to throw you down. ‘Cause I walked here long miles on hot sand to publicly repent my sins. ‘Cause I almost forgot, six million died without having the option of giggling on bar stools. Almost forgot that concentration camp survivors are now a dying generation that my children may never have the sensation of seeing in person. And if you must see me as that blood-sucking Jew, see me as that pesky mosquito that bites and sucks the prejudice right out of you. Don’t get it twisted ‘cause you might live in New York City where you can buy knishes at stands for $1.50. We only make up 2.2 percent of the American population. You see, many in other parts of the country are not feeling me. I’m not trying to compete in a contest of oppression. Just feel the need to mention the miserable tension I feel in my heart when people say things like, “The Blacks and the Jews, oh, they just don’t get along.” Just feel the need to say I can’t be the only exception to the rule, just the one right now using my poetry as a tool to maybe change just one heart tonight. 'Cause I’m the Hebrew Mamita, long lost daughter of Abraham and Sarah, the sexy oy veying, Matzah eating, Chutzpah having, non-cheaping, non-conspirasizing, always questioning, hip-hop listening, Torah-scroll reading, all people loving, pride-filled Jewish girl. Bigging up all people who are a little miffed ‘cause someone tells you don’t look like or act like your people. Impossible. ‘Cause you are your people. You just tell them they don’t look, period.

I perform in so many communities. So one of the most important things is, performing these pieces—this and other pieces that I do—outside of the Jewish community, and I really make a point to do that. I go to all different races, all different neighborhoods and do my art, because I think that telling those stories, even if it’s for a brief period of time, kind of brings people together. And is a great way of engaging people to talk about stereotypes and make that an open conversation. And I think that just having someone in the room doing that is a political act in itself.

I’m just one person. I’m not trying to change the whole world. But I do think it makes a difference. And it makes people think differently about what they say in front of other people. And if I can make a few people see things differently, and maybe not judge someone and say something, then I feel like I’ve done my job.