Gregory Spinner began reading comics as a kid, but discovered serious and profound stories in graphic art that are anything but childish. At Skidmore College, he teaches graphic novels in his courses, and recently co-curated an exhibit there with Rachel Seligman called: “Graphic Jews: Negotiating Identity in Sequential Art.” Today, Spinner talks with us about the watershed comic Maus, and the evolving expression of Jewish identity through comics. 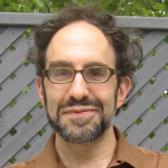 Gregory Spinner began reading comics as a kid, but discovered serious and profound stories in graphic art that are anything but childish. At Skidmore College, he teaches graphic novels in his courses, and recently co-curated an exhibit there with Rachel Seligman called: “Graphic Jews: Negotiating Identity in Sequential Art.” Today, Spinner talks with us about the watershed comic Maus, and the evolving expression of Jewish identity through comics.

GREGORY SPINNER:
Maus, subtitled A Survivor’s Tale, is a work of tremendous sophistication. I think that was, for many people, the first time it occurred to them—as people who might not have grown up reading comics—that comics had this possibility.

ALEISA FISHMAN:
Gregory Spinner began reading comics as a kid, but discovered serious and profound stories in graphic art that are anything but childish. At Skidmore College, he teaches graphic novels in his courses, and recently co-curated an exhibit there with Rachel Seligman called: “Graphic Jews: Negotiating Identity in Sequential Art.”

Today, Spinner talks with us about the watershed comic Maus, and the evolving expression of Jewish identity through comics.

Welcome to Voices on Antisemitism, a podcast series from the United States Holocaust Memorial Museum made possible by generous support from the Elizabeth and Oliver Stanton Foundation. I’m Aleisa Fishman. Every month, we invite a guest to reflect about the many ways that antisemitism and hatred influence our world today. From his office at Skidmore College, here’s Gregory Spinner.

GREGORY SPINNER:
Many of the creators of comics, and particularly of superhero comics, were Jews. So the people who created “Superman” and who created “Batman” and some of the better-known figures, were Jewish artists and writers. The genre emerges in the mid-’30s and by the ‘40s it’s flourishing, and many of the characters were enlisted in the fight against the Axis. And what I think we see there in the superhero comic is not that we have Jews being particularly Jewish. What we have are Jews being very American, that this is an expression of their patriotism, rather than an expression of ethnic or religious sensibility.

I think what really changed for comics was the changing face of America by the late ‘60s. The counterculture brought with it a sense in which people no longer thought their highest aspiration would be to fit in, if by fitting in meant being simply white, Anglo Saxon, Protestant. And we had women’s liberation, and Black Power, and various movements that made people feel more comfortable with expressing an identity that was not WASP-y. And I think that’s what changes with comics is the sense that people can tell their own stories, that they don’t have to aspire to a single model of being American.

So Maus: A Survivor’s Tale is basically the story of Art Spiegelman’s father Vladek. He is narrating it and Art is recording it on an old cassette recorder. It is a Holocaust memoir. So the story just reads in some ways as the story told by Vladek of what he went through leading up to and through his imprisonment, his internment in concentration camps. But it is drawn in a cartoon style in which the Jews are depicted as mice, and the Nazis are cats, and then other nationalities—say, the French are frogs, Americans are dogs, the Poles are pigs—and they each come to represent their respective people in terms of the visual style.

What Art Spiegelman does in Maus is he takes these old antisemitic images—the rhetorical and visual tropes in which Jews are vermin—and he turns them against themselves. So there’s this insidious Nazi propaganda that he literalizes in order to expose the flawed logic of a racism in which every nation or ethnicity is depicted as a species unto itself.

And there’s this whole history that feeds into these drawings in which you place your so-called funny animals into the un-funniest of situations, that of genocide. And yet counter-intuitively, by drawing persons as talking animals, it actually brings out their humanity. Somehow it allows them to speak in real voices, not as caricatures, not as stereotypes, so it effectively re-humanizes them.

I have never not known about the Holocaust. I mean, at some level, that can’t be literally true— I wasn’t born with that knowledge—but I learned about it at such an early age, it was so much a part of who my family was, that I have no recollection of the first time someone told me about the Holocaust. I’ve just always known it. To grow up as a Jew in America meant a knowledge that the world was capable of this kind of hatred, and one was not allowed to simply forget it. So seeing Maus was not an introduction to the Holocaust. But, I think having an identity that one is comfortable with means that one knows a story. Obviously the Holocaust is a deeply unsettling story. But one can, within that larger sense of the discomfort and the horror, become comfortable with the fact that one has an entrée into it. That it doesn’t remain silence and the unspeakable, but that one has a voice.

To give you an example, on the very last page of Maus Art’s father Vladek actually gives a storybook ending. He says, “We lived happy, happy ever after.” And the reader, who’s gotten to the last page, knows this is profoundly untrue. And that kind of transparency built into Maus is why it’s so important. Because as important as it is to testify to the Shoah, to the horrific event, the destruction of millions, what we get is a kind of reflection on what it is to retell the past, that every act of recalling and recording history occurs simultaneously with its editing. So, that complicated layering of perspective, I think, is a richness that Maus brings to what it is to talk about the Holocaust, or any historical event that we need to grapple with again, and again, and again, and can’t simply consign to the past as if it doesn’t keep echoing through the present.