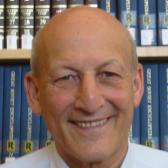 DAN BAR-ON:
Survivors had a very difficult time in the '50s and the '60s. And I started to understand how much of the problems that I see in daily life in Israel are actually related to unresolved issues from the Holocaust, both among survivors, but even more so among their children. So, I think in these families later on when their children were born, I describe it through this expression of "the double wall." The survivors built an emotional wall between their experiences in the past, and their children felt this wall and built their own wall along the wall of their parents.

DANIEL GREENE:
Fifty years after World War II, Israeli psychologist Dan Bar-On began bringing together children of Holocaust survivors with children of Nazi perpetrators for dialogue and reflection. Over the course of five years, members of the group found they shared much in common, particularly the walls of silence between themselves and their parents and communities. Building trust through what Bar-On calls "impossible encounters," inspired the group to look outward to help address contemporary conflicts.

Welcome to Voices on Antisemitism, a free podcast series of the United States Holocaust Memorial Museum made possible by generous support from the Oliver and Elizabeth Stanton Foundation. I'm Daniel Greene. Every other week, we invite a guest to reflect about the many ways that antisemitism and hatred influence our world today. Here's psychologist Dan Bar-On.

DAN BAR-ON:
I had one personal experience. I was at a conference in Oslo, and I met a woman there and she said, "I was born 1943 in Vienna."

And then she said, "I was not Jewish at that time."

So, I became curious. "What's your story?"

And she said, "When I was 16, I found out that I had a distant aunt who was half Jewish and she was killed in the Holocaust, and my reaction was to go to Israel, to change my name, to become Jewish."

And I asked her, "Why did you react in such a- because you didn't even know that aunt?"

And she said, "I was sure that my father participated in all these terrible things. And my reaction was to just to cut my relationship with him."

And so that actually brought me to think: is that a typical reaction? And so I tried to find some literature about it. And I couldn't find anything. And that really troubled me. I mean, we know already something about families of survivors. No one has studied the family of perpetrators. Why is that?

So, it took me quite a time until I decided to find out myself. And then I started by putting advertisements in newspapers in Germany, which was a very strange idea. I said who I am, and that I'm looking for people whose parents were in the SS, and who participated in the persecution, extermination of Jews and other minorities. And over three years I gathered more than ninety names.

I think it took me a long while to understand that they actually were living also in kind of a limbo, that they could talk with no one about that past. And if somebody was interested to hear, they were willing to give it a try.

It is a crisis. I mean, I saw it among my interviewees. Once they found out and they couldn't hide themselves from it anymore, then you have to face that the father that you love, or grandfather, he participated in terrible killing. And he was actively participating in it. And if you will look for details sometimes you find out that he was doing this willingly, or even he enjoyed that, or it was the best period of his life. So, I think it's an extremely complex thing to work through. I think almost impossible to work through. I think these two sides of the father cannot be put together anymore. And therefore you understand why so many of them don't want to find out about it.

When they met with each other, and I brought them together, and they shared their stories, they decided to develop their own self-help group. And they did that for the next four years. They met regularly in a private setting. And I think they were very courageous, because at that time it was the only group in Germany that met under that title. You can say that if this minority doesn't exist then we are in trouble.

And so after watching what they did for four years, in 1992 I asked them would they be willing now to meet with a group of children of Holocaust survivors. And they said, "Yes."

So, what was fascinating about that meeting was that they started quite spontaneously to share stories with each other from both sides. And actually how they found that there are so many similarities in what they have to struggle with—with the silence, with not knowing, with the after effects, with feeling estranged from their own setting, feeling this issue of rootlessness. I mean, always these things somehow link to each other.

I really learned some of these people, to admire their courage. I mean how they dealt with it very openly, and their willingness to meet with each other, to meet with Jewish people on the basis that they know what their father did, that they take responsibility which their father never did. It was really a very special group of people.

And I think for me the very interesting turning point was in 1998 when the group was willing to bring in practitioners from current conflicts, so Palestinians and Israelis, and people from Northern Ireland, from South Africa, and to see if what we did is relevant for them. So, I think that was the first time where I could see that the group had not only a goal for itself but also for other people.

And what I learned through this process was that actually good and evil can reside in the same person. We have potential for both and actually many times they reside very closely to each other. And before that I had some very simplistic ideas, like many Israelis had, that we are the good ones because we are the survivors, and they are the evil ones, and that it had to do with a national personality, kind of. And many times it is a situation that actually determines which part of you is coming out, and sometimes both come out in one situation after the other. I mean, then you learn really how life is complicated.

I did decide to continue to work in the Jewish-German context, but also to move into the Israeli-Palestinian context consciously. I did that. There is a certain way of hiding from myself that in reality. There is not only the Holocaust, there's also something new happening. And how do I relate to that?

And I learned that has completely new difficulties for me. I mean, anyway in the Jewish-German context, I came from the "good side" and here, suddenly I find my situation where I'm being accused of coming from the "bad side." And how I can I manage with this?

The situation has some characteristics which are very different. I mean, here there's no agreement about who are the victims, who are the victimizers. Palestinians feel themselves oppressed by the Jewish people and the occupation. On the other hand, we as Jews are afraid of the Muslim world, which we try to live in.

But if we really want to live in the Middle East and we live near the Palestinians, and accept them as partners, then you have to find ways how you build trust. And it's extremely difficult because especially in the Israeli-Palestinian conflict, each side actually has some dreams that they will be alone, and the other side will vanish. And to teach the society to move from that into something of coexistence like we are suggesting is a very difficult process. And therefore it takes so much energy.