Herman Taube was born in Lodz, Poland in 1918. Orphaned at an early age, he was brought up by Mirle and Gershon Mandel, his grandparents. Gershon ran a small shop that produced soap and candles. Herman attended a yeshiva (school for study of the Torah) prior to WWII. Gershon hoped his grandson would become a rabbi, but Herman instead began nursing in 1937.

Herman was called for duty as a medic in the Polish Army in August 1939. Germany invaded Poland on September 1, 1939, thus marking the start of WWII. The Polish army was defeated within weeks of the Blitzkrieg, (lightning war). The Soviet Union occupied eastern Poland according to the German-Soviet Pact on September 17, 1939. Herman, along with the retreating Polish Army, was captured by the Soviet forces after crossing the Bug River. While officers and those of higher rank were sent to Katyn and later executed, lower ranking soldiers were sent to Siberia, a harsh area of the Soviet Union where gulags (Soviet work camps) were located. 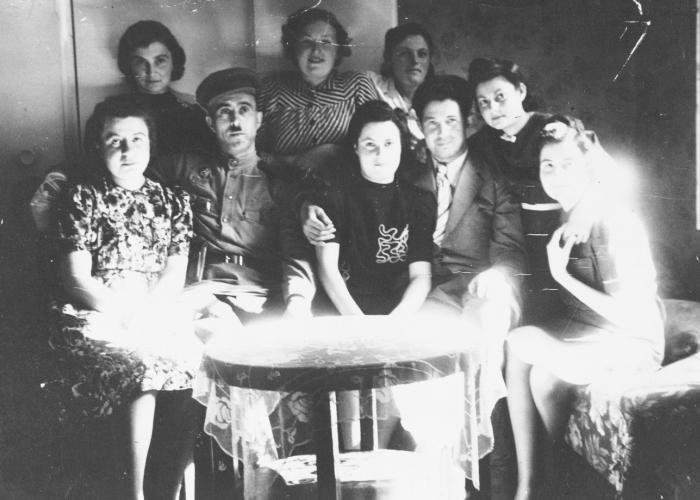 Herman, Susan and a group of Jewish DPs gather around a table in Koeslin, Poland. —US Holocaust Memorial Museum, courtesy of Susan and Herman Taube.

German forces invaded the Soviet Union on June 22, 1941. Based on an agreement between the Soviet government and the Polish government in exile, all Polish citizens held in Soviet camps were to be released (in part, to create a Second Polish Army in exile). Upon his release, Herman went to Uzbekistan to join the Second Polish Army. He worked as a medic in Uzbekistan for two years until his unit moved to the eastern front. In June 1944 Herman was injured when the ambulance he was riding in drove over a land mine. After recuperating Herman was sent to the headquarters of the Second Polish Army, newly stationed in Lublin, the former Lublin/Majdanek concentration camp. Herman worked in the Majdanek hospital, caring for the liberated prisoners who were left behind when the retreating Nazis liquidated the camp. Shortly thereafter Herman was sent to work in a hospital in Pomerania where he worked until the end of the war.

After the war Herman married Susan Strauss, a fellow survivor. The two immigrated to the United States in 1947. Herman is the author of more than twenty novels and books of poetry and has worked as a writer and journalist for over 60 years. Herman lived in the Washington, DC area and volunteered at the United States Holocaust Memorial Museum.