October 15, 2013, was the first time I had stepped on the soil of L’viv in 68 years. I was born here in 1941. I was hidden here—first in a bunker in the barn of my dziadzio (grandpa in Polish), next in a tunnel bunker in the Borszczowice Forest, along with 30 or so other Jews. Later, I was hidden in the home of the Schwarczynskis, a retired Polish Catholic engineer and his wife. I was the “niece” of their housekeeper, Lucia Nowicka (later she became my babcia, or grandmother).

L’viv has been the subject of my nightmares for many of those 68 years. I remember Jews in uncovered trucks, some dead, some dying, their moans and cries filling the air, their metallicsmelling blood splattered on the cobblestones. I remember seeing black, thick smoke streaming in the air; hearing sirens screaming; tripping on broken slabs of concrete; encountering buildings razed to rubble. The vinegary smell of fear permeating the atmosphere.

So why did I return to L’viv—this unmarked grave of my people—at the age of 72? First of all, I wanted to retrace my dziadzio’s steps. He described our lives from 1941 to 1948 in his diary. I always wondered how many of his own horrible experiences could be corroborated by others and how much of what I saw would rekindle my own memories. I also hoped to find some trace of my baby sister, Tola Weinstock, whose name had been changed to Antonina Nowicka, which was Catholic sounding, to save her life. Dziadzio told no one that she was a Jewish child when he placed her in Dr. Groer’s orphanage at the age of six months.

Perhaps I also wanted to grapple with my own demons. Why did I survive when so many, more worthy people did not? Why was I not one of the six million who were slain simply for being Jewish?

To tell a little about our visit, I will begin with our sojourn to Janowska, where my dziadzio had been imprisoned. My husband, Larry; Alex, our native guide; Andrew, our driver; and I set off on our trip. It is a sunny but chilly day. Leaves of yellow and rust carpet the ground. Alex, whose English is fluent, has a copy of our itinerary. The sites we have selected to visit were culled from Dziadzio’s diary. Alex, Larry, and I are seated in a white van. Andrew is a magician who navigates two-way narrow cobblestone streets impossibly jammed with cars, buses, and pedestrians. He understands and speaks few words of English, but he is kind and considerate. He helps me get on and off the high step leading to my front passenger seat in the van. Seat belts are not the custom here, and I fear that wearing one would insult Andrew’s driving talents.

We drive to the infamous concentration camp, Janowska. Most of the camp itself was razed by the Russians after the war and rebuilt as a prison. The Ukrainians have retained it as a prison. We can not enter, nor can we even take photos of the prison itself; it would be a breach of security to do so. But there is a road nearby where Andrew can park, and we can walk around.

Janowska Prison is a large compound squatting on the top of a tall, flat-topped hill. We glimpse tumbledown buildings, some short and made of dirty bricks with tiny, broken window panes. A large edifice with a tall chimney spews billows of thick, black smoke that the wind carries away. From 1941 to 1943, people reported the smoke often reeked of charred human flesh from victims who were shot and then taken to the back to be burned, to save a trip to the Belzec gas chambers.

Today’s black smoke smells innocently of burning wood. The entire compound is encircled by 30-foot-high barbed-wire walls with cylinders of razor wire on top. Janowska Prison presents a menacing facade, but it looms as a mere shadow of its concentration camp ancestor.

On the right side, but outside the barbed wire, partially hidden by a dirty white concrete wall, stands a rundown three-story, white- and mustard-colored concrete edifice. This structure is all that remains of the original Janowska. At that time, the building was located inside the camp itself; now it stands outside the prison. It has four balconies, three of which have been enclosed for year-round usage. One remains an open balcony. 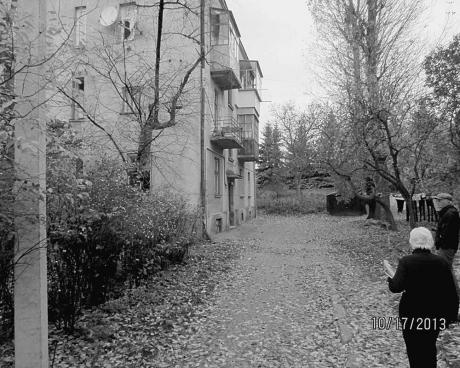 Julie Keefer stands outside a structure from the Janowska concentration camp. Courtesy of Julie Keefer.

This dwelling is now an apartment building; it too looks innocent of its dreadful past. But from 1941 to 1943, it was the home of the Nazi commandant, Willhaus, and his deputy, Rokitin. On one of those balconies, Rokitin would stand and yell for a head count. If he did not like the way a prisoner was standing or the way his Jewish star patches were sewn on his armbands or trousers, he would shoot that prisoner in the head.

“These very tracks held tram cars crammed with hundreds of prisoners being transported to the Janowska camp to replace those who had been killed,” Alex tells us. There was a gate in the electrified barbed wire at the top of the hill, with a tall sentry post, where the new prisoners were herded in, forced to give up their clothing, and issued threadbare shirts, pants, and old shoes.

Dziadzio described the “welcome.” “We were taunted with names like ‘filthy Jew,’ ‘dirty pig,’ and were beaten. As we entered, we saw tall, concrete posts with men being hung upside down to expire in agony. One of them was a friend of mine.”

Today there is no more electrified wire. No more concrete pillars. Now there is simply an enclosed wooden shelter for sentries. As I tread this road, words from my dziadzio’s diary transport me back to 1941–42, when he was a prisoner here. On the right side is a broken sidewalk, behind which are houses and apartment buildings. Some are new. Some are the ugly, gray, cinder block, functional dwellings typical of Soviet architecture in L’viv.

Some houses appear old, as if they might have been standing from 1941 to 1943, when Janowska was a concentration camp. I wonder to myself, what did the residents of those homes see? Hear? Smell? What did they do—if anything—when so many atrocities were being committed less than 50 feet from their front door? What did they think? Feel?

We continue climbing. At the top of the hill, on the right, beyond the residences, a steep, wooded incline with a ladder-like set of steps leads to a cemetery.

Alex points in that direction. “Since the 1850s, this was the site of the ‘new’ Jewish cemetery, built when the old one dating from the 1500s was full,” he says. “Nazis had all the gravestones removed and chopped up. They used the pieces to pave roads.”

I trudge downhill slowly, kicking pebbles as I go. My shoulders are slumped; my head is down. I can barely breathe. Larry places his arm around me and pulls me close. We follow Alex downhill to the van. The three of us get into the van, and Andrew drives us on the main road past the prison itself. He turns right, into a small pull-off not visible from the road. Andrew parks the van, and all four of us get out. We see a huge sign above a sky-blue bench with the following words penned by the writer and poet Dr. Abraham Schwartz. The sign was translated into English and read:

"Passer-by, Stop! Bow Your Head
In front you see a spot of the former Janowska death camp. The ground is moaning. Here the innocent victims were tortured and tormented; here they were executed and sent to gas chambers! May the memory of the innocently murdered live forever! Eternal malediction be upon executioners!"

In front of us, to the left side of some open metal gates, is a huge, eight-ton stone. It has a large Star of David etched into the number 200,000, with the star separating the third and fourth digits. Something is written in Ukrainian at the top, Hebrew in the middle, and English at the bottom. It is hard to decipher the words, as garlands of beribboned plastic flowers cover most of the English. It seems to read, “Let the memory of all the Nazi genocide victims at the Janowska death camp remain forever.”

I spot an old man huddled into a coat two sizes too large for him. A raggedy woolen cap adorns his weathered, wrinkled face. His hands, in cloth gloves with holes, expose bare, gnarled fingers clasping a broom made of twigs tied together. He is sweeping leaves away from the sky-blue bench. At its far right edge is an open can of blue paint, a paintbrush lying across the top. He seems to have touched up the bench. Alex asks the man in Ukrainian, “Who pays you to do this sweeping and painting?”

Near Alex is a middle-aged woman, five-foot-two, her short hair dyed a vivid crimson. Her polyester, violet-colored, clingy shirt exposes several layers of “love handles.” Her face is round, her eyes a faded blue. She gestures toward the old man and tells Alex, “He comes here often to clean up. I see him every time I come here. He’s here all the time. He even comes in rain and snow.”

Alex explains to her why we Americans are here. “Her grandfather was a prisoner here in Janowska,” he explains to her in rapid Ukrainian. Gesturing to me, he adds, “She was born here in L’viv but left for America as a child.”

The woman points to the sign. Her eyes fill up. “They are blessed. Remember, they are in heaven. I live in that apartment building right near the prison. I hear chilling, ghostly sounds all the time. Terrible things were done by the Nazis who lived there. It’s hard to sleep peacefully in that house. But I live there to be near my son, who is locked up in that prison.”

She begins to weep, approaches me, and throws her arms around me. I, too, choke up. I clutch her to my chest. I pat her back and say, “I’m so sorry for your pain.”

She replies, “Remember, they are in heaven.” Alex translates her Ukrainian for me and my English for her. We do not understand each other’s words, but we feel each other’s sorrow.

The Nazis tried to erase all traces of the Jews. In L’viv, they almost succeeded. Two hundred thousand were slain in Janowska alone. Even graves dating back to the 1500s were desecrated. Headstones were smashed.

Today, as I enter cemeteries, I look with yearning, my eyes filled with unshed tears, when I see monuments to other people’s heritage. Where is a memorial to mine?

Perhaps my own heritage is not etched in granite or marble. It is the loving memory of my dziadzio that I cherish in my heart. He was my rock and my hero. When the world around me was shattering during World War II, he protected me. He was larger than life. He evaded death at Jaktarow. He escaped from Janowska and led a resistance in the Borszczowice Forest. He helped save my life and showered me with unconditional love at a time when love was scarce. He survived the war with his soul intact. He, who lost everything and almost everyone, could dance and sing and talk constantly about how lucky he was. “I hef you, Yulitska. I hef Larry, I hef Steef, I hef Mona. You are my million dollars. I am a rich man.”

©2018, Julie Keefer. The text, images, and audio and video clips on this website are available for limited non-commercial, educational, and personal use only, or for fair use as defined in the United States copyright laws.