Ray Allen has visited the United States Holocaust Memorial Museum several times since it opened; each time he brings a different friend, teammate, or coach. The Museum, Allen says, has a message for everyone and lessons about prejudice that are universally relevant. 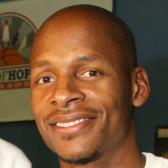 Ray Allen has visited the United States Holocaust Memorial Museum several times since it opened; each time he brings a different friend, teammate, or coach. The Museum, Allen says, has a message for everyone and lessons about prejudice that are universally relevant.

RAY ALLEN:
No matter where you live, where you come from, what language you speak or what religion that you subscribe to, you know, we're all the same people. And nobody deserves what happened in the Holocaust.

ALEISA FISHMAN:
Ray Allen is a professional basketball player with the Boston Celtics. He has visited the United States Holocaust Memorial Museum several times since it opened; each time he brings a different friend, teammate, or coach. The Museum, Allen says, has a message for everyone and lessons about prejudice that are universally relevant.

Welcome to Voices on Antisemitism, a podcast series from the United States Holocaust Memorial Museum made possible by generous support from the Oliver and Elizabeth Stanton Foundation. I'm your host, Aleisa Fishman. Every month, we invite a guest to reflect about the many ways that antisemitism and hatred influence our world today. From his home near Boston, Massachusetts, here's Ray Allen.

RAY ALLEN:
I grew up in a military family. My father was in the Air Force. I traveled all over the world, and I lived in Germany and England for about seven years. I learned as a young child that there's so many different ways to do things—different ways of life, different schooling. And I've always had that perspective, just to get to know other people's way of life, and to understand who people are, where they come from.

I didn't really experience a great deal of racism until I moved to South Carolina and I was around the people that I was there. I started the eighth grade there, and there was a very, very clear message of sticking to your own, you know, from the teachers, from the school systems, from the other kids, from the parents. And for a 13-year-old kid, it was like, I didn't understand. And, you know, it was the first time in my life that people just didn't like me because I wasn't like them, I didn't come from where they came from. So I always said that when I started playing basketball, and I was getting better at it, that the people who I hang around with, I'm going to bridge the gaps.

My first visit to the Holocaust Museum, I had just gotten to the NBA. And I heard about it. I've always been, you know, a guy that's gone to museums. My coach in college was very much into taking us places and teaching us things while we traveled throughout the course of the season. And so, I just picked up that. When I traveled, I always went to places, cities. I'd try to figure out what different cities had to offer. And I just remember the first time I went there, it being so profound. And it's a lesson for everybody. That's something that stayed true to me. And I've been four or five times. And every time I go, I see something different. And when I come back, I always take somebody different.

I brought a friend of mine and he was an older black gentleman. And he, you know, he walked through and he had so many questions, and he couldn't believe that some of the things that he saw had taken place. And after we got done, we walked out and the first thing he questioned was, "What about slavery?" He was an older gentleman but, you know, it kind of made him angry, because he wanted to see something like that about the plight of the black people in America, about slavery. And I told him…I said, "This is about slavery." This is about people being enslaved and people being annihilated. And this is a lesson, so slavery doesn't happen anymore, so people don't believe that they're better than the next person. This is all about slavery. It just so happens to be spoken through the words of the Jewish people in the Holocaust, people who the Nazis tried to annihilate.

You take any person through the Museum, based on their experiences and their life, they're going to see different things. And they're going to talk about the things they want to talk about. But I think the most important thing is communication. That's a powerful, powerful tool, just talking about it and trying to understand it, and learn from it, and grow.