Miriam Isaacs was born to Holocaust survivors in a displaced persons camp in Germany. Trained as a linguist, she taught Yiddish for many years at the University of Maryland. More recently, she has been translating the Stonehill Jewish Song Collection, housed here at the U.S. Holocaust Memorial Museum. 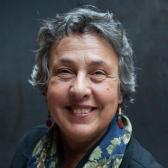 Miriam Isaacs was born to Holocaust survivors in a displaced persons camp in Germany. Trained as a linguist, she taught Yiddish for many years at the University of Maryland. More recently, she has been translating the Stonehill Jewish Song Collection, housed here at the U.S. Holocaust Memorial Museum.

MIRIAM ISAACS:
The survivors who were in the hotel were very conscious of the fact that they were the last Mohicans. They called themselves: die letzte Mohikaner. They were conscious that this was the end of a civilization, and that they were the last bearers of that civilization. And soon they were to move off to different cities and different towns, but there, they still were part of a world that was disappearing.

ALEISA FISHMAN:
Miriam Isaacs was born to Holocaust survivors in a displaced persons camp in Germany. Trained as a linguist, she taught Yiddish for many years at the University of Maryland. More recently, she has been translating the Stonehill Jewish Song Collection, housed here at the U.S. Holocaust Memorial Museum.

Welcome to Voices on Antisemitism, a podcast series from the United States Holocaust Memorial Museum made possible by generous support from the Elizabeth and Oliver Stanton Foundation. I’m Aleisa Fishman. Every month, we invite a guest to reflect about the many ways that antisemitism and hatred influence our world today. From Washington DC, here’s Miriam Isaacs.

MIRIAM ISAACS:
In 1948, there were some hotels in New York that were used by various Jewish relief agencies to temporarily house Holocaust survivors as they came out of the DP camps of Europe. And in one of those hotels, a man named Ben Stonehill used some wire sound equipment to record over a thousand songs from individuals in the lobby of the Marseilles Hotel, which is on Broadway and 103rd Street. He was there from morning until late, and collected songs from children, men, women.

Ben Stonehill was an ordinary, working man. He wasn’t a trained ethnographer. He went to this hotel because he cared about the people and because he thought that this material was important to preserve. So he basically just said, “Sing something.” And what they chose is indicative of how they felt. It’s more of a barometer of emotion than of thought. Longing for home comes through greatly—lost parents, lost children, just loss in general. And then to balance that, there’s lots of funny stuff. There’s very dirty songs that made me blush, and lots of humorous songs. One is: “Af yene velt bin ikh gevezn nekhtn” (I was in paradise yesterday). And what did I see in paradise? I saw Adam was a maker of coats and Eve was playing with the snake and the angels were making shoes, but everybody was walking around barefoot; that’s what I saw in the world to come. So I can even try to sing it if I can remember….

In the hotel singing the songs created community. There was a microphone. There was a locus. There was a space that was partly private and partly public. So I think that freed people up to express themselves. Very often, survivors who had suffered the worst really could not talk about their experiences, but if they sang, then you got songs like “Tsi bin ikh fun a shteyn geboyrn?” (Was I born from a stone?) or “Vu zaynen mayne zibn gute yor?” (Where are my seven good years?). And that says it all. We don’t have a tombstone to go to for our lost mother, and we haven’t had a good year in our lives, and…why?

I was born from a stone.
That’s what they all say, from the biggest to the smallest
A good life, I did not have.
Because God punished me.
One comfort remains for me,
In the cemetery not far from my door.
There lay a stone buried very deep
Tearfully, I cry and I call out:
Stone, stone, my dear stone.
You had once been my dear mother.
A heart, a soul you had inside you.
I didn’t know you because God punished me….

The collection is important for me, more than anything, because it does give you a window into what happened to them, what happened to them emotionally. For example, there’s one song called “Drei Lilien.” So the person who sings it says that he was forced to sing it in Buchenwald. So I went online and sure enough you can find this song. And it turns out to be a neo-fascist hit, still, to this day. And that’s important to understand that to be, not only forced to work and be a slave, but then to have to sing your master’s songs for them and then have that go in your head afterwards forever. Because they’re marches; it’s oom-pah-pah. My mother had a song like that when she would do housework. She had been in Auschwitz and then Ravensbrück, and she used to sing “Wenn die Soldaten auf die Straß marchieren, öffnen die Mädchen die Fenster und die Türen. Ho ho, ho ho.” So I said, “Mom, what are you singing this for? This is obviously a Nazi song.” To me, it was such a horrible reminder of where she had been; she wouldn’t talk about where she had been. She couldn’t talk about where she had been. But hearing that song told me something really important.

As in a dream, I now see,
when I recall when I was a small child….

By recording people, Ben Stonehill was acknowledging that their culture was important. Everybody else was trying to tell them to learn English, find jobs, assimilate. And he was saying, “What you know and what you bring with you is of some value and we’re going to preserve that,” and I think that must have been so important to people there.

What I’ve seen so much of is people talking about the Holocaust in rational terms. How many numbers, how many ghettos, where were they? But the numbers aren’t nearly as important as the emotions, as what people felt. The indignity, the trying to reckon with what it means to be a Jew in the world. How do you come to terms with that? That is much less tangible and less calculable, but really much more important because we tend to avoid those things and they’re all around us today. I hope these songs—the words of the songs, the quality of the voices, the circumstances of the collections of these songs—will be a reminder to give people a sense of humanity, that when we’re talking about refugees or wars or injustices, we’re not talking about numbers. We’re talking about people, and children, and loss. And that, whoever comes around, to pay attention to them at a human level is augmenting their humanity.

“Mir zenen vi feygelekh fraye” (We are like free birds)