Miriam Greenspan encourages people to confront grief, and to learn from it. She's come to this idea in part by listening closely to Holocaust survivors, including her own parents. 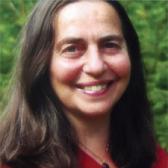 Miriam Greenspan encourages people to confront grief, and to learn from it. She's come to this idea in part by listening closely to Holocaust survivors, including her own parents.

MIRIAM GREENSPAN:
Everyone who has ever worked as a psychologist, as I have, with trauma—whether it's from rape, or domestic violence, or the larger scale traumas, the social evils—knows that the first step in healing from trauma is putting together a coherent narrative of what happened.

DANIEL GREENE:
Miriam Greenspan encourages people to confront grief, and to learn from it. She's come to this idea in part by listening closely to Holocaust survivors, including her own parents. Greenspan, who was born in a Displaced Persons camp in Germany just after WWII, has seen the possibility of healing, even after the Holocaust.

Welcome to Voices on Antisemitism, a free podcast series of the United States Holocaust Memorial Museum made possible by generous support from the Oliver and Elizabeth Stanton Foundation. I'm Daniel Greene. Every other week, we invite a guest to reflect about the many ways that antisemitism and hatred influence our world today. Here's psychologist and author Miriam Greenspan.

MIRIAM GREENSPAN:
From the very beginnings of my life I always knew about the Holocaust, and yet I don't remember ever being told about it.

From very early I had a recurrent dream that I was trying to escape some unnameable horror, and often I'm trying to save other people. And usually the dream ended with me standing alone having not saved anyone, but still surviving. And in a sense I think what I was dreaming was the rudiments of my mother's survivor story.

The fact is that the Holocaust is not a story for young children. Somewhere in my teens it was conscious. And then finally in the mid-1970s, when I was already in my late 20s, I interviewed my parents. This was really the first time that I heard their stories all in one place and even then I could only remember fragments because the magnitude of the trauma, I think, is so extreme that the hearing itself is traumatic. But the stories need to be told.

You know, knowing itself, I call it a burden, it's also a necessity. There can be a healing process but only if that burden of knowing is taken on and is shared.

In 1993, it was the occasion of the 50th anniversary of the Warsaw Ghetto uprising, and it was a time when a lot of Jews from around the world were planning to visit Poland in a sense of symbolically to say "We are still here."

And my father asked me, invited me and my brother to go with him and my mother.

There was a ceremony at Treblinka. And I remember the cantor singing "El Moleh Rachamim," the song of mourning that's usually sung at Yom Kippur. And in unison these hundreds of survivors began to weep. And it was raining. It seemed almost like the world was weeping with us. It was a very, very important moment of mourning.

And interestingly my father when he invited me to go on this trip said—he was 80 years old, he was getting frail—and he said, "Before I die, this would be a way to heal a little bit before I die.”

I'd never heard him use the word "healing" in relation to the Holocaust. And I do think that in some sense it was. You know, I don't think one is ever completely healed of the Holocaust. I think it was a healing moment for him and for our family.

One of the first things I was forcefully hit with when I set foot in Warsaw was that antisemitism is very much—was very much—still alive in Poland. On the front door of the synagogue was a freshly painted swastika and the words "Raus Juden"—"out Jews."

And there were several other instances like that. I understood tiny bits of Polish and I overheard a waitress saying, "These horrible Zhids, these Yids, these Jews are here again." So it was very disconcerting to see how much antisemitism still lived there.

But thankfully there was something else in this trip that was a kind of counter example of what human beings are capable of. And that is that this night of commemoration, my father began to get very, very cold. So I said to him, "Why don't we see if we can at least get a cup of tea and warm you up?"

And he said, "Yes, I can't stand here without warming up."

So we walked down the street and he saw a little elderly Polish woman and went up to her and said he was looking for a place to have some tea.

And she said, "You can have tea in my home."

And you know this was a tiny little place, very modest. Obviously the woman was not at all wealthy, and here she was inviting us into her home to have tea, and serving us some bread. And she immediately turned on the television, and she said, "Here you can stay here and watch the proceedings from my house and not be cold."

And my father, I remember him turning to me and saying, "See this should teach us not to be prejudiced in any way. We should not treat all Poles as antisemites because look at what a kind person she is."

And, of course it's amazing how a single act of human kindness can accomplish so much.