An early adopter of computer culture, Mike Godwin noticed in online discussions an abundance of glib comparisons to Hitler and the Nazis. In response, he coined Godwin's Law, a modern adage intended to promote more thoughtful dialogue. 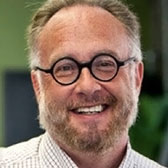 An early adopter of computer culture, Mike Godwin noticed in online discussions an abundance of glib comparisons to Hitler and the Nazis. In response, he coined Godwin's Law, a modern adage intended to promote more thoughtful dialogue.

MIKE GODWIN:
I thought that if we continued to make trivial comparisons to Nazis or to Hitler or to the Holocaust, we in some ways were papering over how spiritually traumatic that period was for all of Western civilization, and maybe for civilization generally.

ALEISA FISHMAN:
Mike Godwin is an author and attorney, who has worked as general counsel for the Electronic Frontier Foundation and the Wikimedia Foundation. An early adopter of computer culture, Godwin noticed in online discussions an abundance of glib comparisons to Hitler and the Nazis. In response, he coined Godwin's Law, a modern adage intended to promote more thoughtful dialogue.

Welcome to Voices on Antisemitism, a podcast series from the United States Holocaust Memorial Museum made possible by generous support from the Elizabeth and Oliver Stanton Foundation. I'm Aleisa Fishman. Every month, we invite a guest to reflect about the many ways that antisemitism and hatred influence our world today. From his home in Oakland, California, here's Mike Godwin.

MIKE GODWIN:
Godwin's Law is a law—or actually, it's not an actual law, but it's a meme, or a kind of a contagious idea—that I tried to create in about 1990. And the law as stated goes as follows: "As an online discussion continues, the probability of a reference or comparison to Hitler or to Nazis approaches one." By which I mean that heated debates tended to proceed in predictable ways, with escalating rhetoric, so that, when you wanted to call someone the worst thing you could call them, you said, "They're like Hitler" or "They're like Nazis" or "This is like the Holocaust."

When I was seeing this happen at the beginning of online culture in the 1980s, I found it very disturbing. But I didn't want to say something deadly earnest like, "You shouldn't make that comparison," because that didn't have any effect at all. What I wanted to do was make people more thoughtful. And I thought, "What could I do?" You know, the difficulty for a single person dealing with any media culture is: how can you as an individual have an effect? And I thought, well, instead of trying to do it through pure application of energy, you could try to be a catalyst instead. So I spread this notion of Godwin's Law around in various online forums, and after awhile I saw other people quoting it and citing it. And, although I originally framed it to apply to online culture, it clearly applies to traditional media culture as well.

You know, I remember growing up and hearing people compared to Attila the Hun. And in fact it's just a trope now. No one alive, obviously, remembers Attila the Hun, and very few people are immersed enough in history to give thought to who Attila the Hun was and why that comparison might have any meaning, or why it might not. And that's a wholly different historical period. But here in the modern era, we fancy that we have civilized ourselves to a pretty high degree. And yet, within living memory, we have this historical period where people acted even worse. And I wanted to not necessarily promote Holocaust exceptionalism, but I really want make people aware of the gravity of the comparisons that they were making.

I think one of the things that happens, when you create an idea that has a certain amount of currency and traction, is that it gets out of your control. And I think that's certainly happened with Godwin's Law. But has it been effective? Yes, I think it has. I think, that the very fact that it surfaces quite often in discussions of whether it's appropriate to compare, say Saddam Hussein to Hitler, or George W. Bush to Hitler, for that matter. I've seen signs at protests of Obama with a soup strainer mustache, which to me shows a remarkable kind of blurriness and historical conflation on the part of the people who carry those signs. Has it worked? Well it hasn't prevented the comparisons from happening. But I think it provides people with a way of recognizing the specious comparisons when they do happen, and labeling them as over the top, hyperbolic, and enables them to be appropriately dismissive.

You know, people will defend their use of Nazi comparisons. They'll say, "Well look, I'm expressing a certain amount of emotional intensity here, or emotional reaction to what you're saying." You know, I think language is pretty flexible. I think you can do that without turning history into a kind of a cartoon or to a rhetorical device.

Although human beings have been inhumane to each other and been vicious to each other since time immemorial, the combination of a very deliberate attempt to de-humanize whole classes of people and the use of technology to exterminate them, or to attempt to, was something fundamentally different; and we need to recognize that. Because as a self-conscious species that tries to direct its own destiny, we have to be aware of how we can go wrong, and we have to be aware that we have created this potential to do great—not just great physical horror, certainly that—but also great moral and spiritual horror to ourselves.