In 1936, Margaret Lambert was poised to win a medal at the Berlin Olympic Games. Just one month before the Olympics began, Lambert was informed by the Reich Sports Office that she would not be allowed to compete. 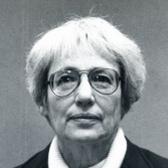 In 1936, Margaret Lambert was poised to win a medal at the Berlin Olympic Games. Just one month before the Olympics began, Lambert was informed by the Reich Sports Office that she would not be allowed to compete.

MARGARET LAMBERT:
I was chosen to represent Germany in the Olympics. And I was on the Olympic team from 1934 until 1936, until they kicked me off. I was allowed to compete three times in those two years. And I beat them every time.

DANIEL GREENE:
In 1936, champion high jumper Margaret Lambert was poised to win a medal at the Berlin Olympic Games. Just one month before the games began, Lambert, known then as Gretel Bergmann, was informed by the Nazi Party that she would not be allowed to compete. Lambert, now 94 and living in Queens, recently looked through photographs and memorabilia from the 1930s.

Welcome to Voices on Antisemitism, a free podcast series of the United States Holocaust Memorial Museum made possible by generous support from the Oliver and Elizabeth Stanton Foundation. I'm Daniel Greene. Every other week, we invite a guest to reflect about the many ways that antisemitism and hatred influence our world today. From her home in New York, here's Margaret Lambert.

MARGARET LAMBERT:
When I was 19 years old, I was sent to England because we saw there was no future for me in Germany. And I became a little bit of a big shot there.

And at the day of the English Championships, my father came to watch me. He had a message for me that I had to come back to Germany, or else.

First, I had said I'm not coming, and my father explained to me that there might be trouble for the family. So I decided to come back.

And I came back to Germany to horrible conditions. Jews were not allowed in restaurants, in movies, in whatever. And even though I was a member of the German Olympic Women's Team, I was not allowed in a stadium. I couldn't practice.

I think only the reason that I did so well was my anger. But it was a very very hard time because I was scared stiff, thinking: How are they gonna get rid of me? Because I knew they wouldn't let me compete. I knew that.

This was all propaganda, that I was a Jew and I was allowed to compete. How would it be, 100,000 people and a Jewish girl wins? I was convinced I was going to win this, and I'm not being conceited. It's truth. And then I thought maybe some night they come and break my legs or something. Anything was possible. Anything was possible.

And I think from the moment I got a letter that they wanted me on the German Olympic team, they figured out exactly how they were going to get rid of me. They told them that I was injured and that's why I couldn't compete. And that was all a lie of course. That was all a lie.

I was so afraid every day of my life. And at the same time I wanted to beat them so badly it was unbelievable.

Well this is the letter I got two weeks I think before the Olympics started that told me that I wasn't good enough and I wouldn't be able to compete.

They waited until the Americans were on the way to come over, and nobody thought they would turn around if this letter would arrive at my house.

I haven't looked at this stuff in a long time.

1936 Olympic high jump was won with [a jump of] a meter-sixty. This shows that I jumped a meter-sixty, the same height that the Olympics were won with. Up here they told me I wasn't good enough, and down here is a newspaper article from the 29th of June that I equalled the German record. And I pasted it there to show that they weren't exactly fair.

So that was the end of it- finished.

This is the scrapbook. These are all things I've won: one, two, three firsts, four firsts, two seconds I think.

This is stuff they wrote about me. I didn't get a swelled head. So that's where I won the championship here- two of them. See I could be so conceited if I wanted. That's me, and here you can see, the ones that ran against me you can't see yet, and it was only a hundred yards!

I used to dream a lot and it was always 100,000 people and I'm standing there waiting to high jump. And then the announcement comes: "Report to the high jump." And I can't move.

And I used to wake up and be so angry at myself. Why can't I forget about this stuff now? But it was a real nightmare for a long, long, long time.

Here is a small amount of medals that I won. There should be one with a swastika on it, which is my most favorite one. Here it is.

That's the one I won when I jumped a meter-sixty. That's the swastika, right in the middle there. And it's my most prized possession. 1936.

I figured if I give up, then they say, "See what happens to the Jews? They're not worth a damn."

And I told them, "I'm gonna teach you guys a lesson whether you like it or not." And I did.

It was a not only a physical, but a moral victory that a Jew could do better than all the Germans combined. Even today it's a great satisfaction to me, somehow. I don't know why. I should be forgetting about all of this stuff and thinking about what I'm gonna cook tonight.