Louise Gruner Gans' experiences with prejudice have influenced her work as a lawyer and as a judge, and have reminded her to keep a human perspective on the law. 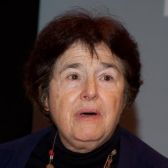 Louise Gruner Gans' experiences with prejudice have influenced her work as a lawyer and as a judge, and have reminded her to keep a human perspective on the law.

LOUISE GRUNER GANS:
Human beings are not naturally good and not naturally evil. They're a combination of the two. And the idea is to try to keep the evil part within check. And law partly, and our law especially, does that quite a bit. And that's good.

ALEISA FISHMAN:
Louise Gruner Gans is a Holocaust survivor and a retired Justice of the New York Supreme Court. Her experiences with prejudice have influenced her work as a lawyer and as a judge, and her feelings about the importance of safeguarding our legal system from what she calls "arbitrary hatred." Judge Gans' experiences have reminded her to keep a human perspective on the law.

Welcome to Voices on Antisemitism, a podcast series from the United States Holocaust Memorial Museum made possible by generous support from the Oliver and Elizabeth Stanton Foundation. I'm Aleisa Fishman. Every month, we invite a guest to reflect about the many ways that antisemitism and hatred influence our world today. Here's Holocaust survivor and retired judge, Louise Gruner Gans.

LOUISE GRUNER GANS:
I would say my earliest memories of antisemitism would have to have been in the '30s in Germany, when out of the blue a series of things happened. There were places where we couldn't go because of being Jewish. For example, there was a big movie theater that played Shirley Temple movies and we couldn't go. The synagogue that we attended had been set on fire. And we walked by and we saw the Star of David burning.

You know, prejudice is just wrong and cruel, and it results in hurt. When I was a little girl, if I looked in the mirror and looked at myself, I didn't see anything that was different about me. Why should I not be able to go see Shirley Temple? It made no sense. It was absurd. And it starts with Shirley Temple, and then the next thing you know it's the way you can live, and with whom you can live, and who you can marry, and where you can work. And it's all utterly arbitrary and not respectful of human dignity, the dignity that every person wants to have and wants to have recognized.

I tried to do whatever I could as a lawyer and as a judge to help have a just society for all groups. My empathies were for the underdog, which of course included antisemitism, but also racism in general. When you become a judge, you are sworn to uphold the law, and you can't just disregard it. But it's how you listen to people. It's how you make sure a jury listens to people. And that's a very important role that a judge has to play. I would try to balance my obligation to uphold and enforce the law with the use of my discretion based on my own experience. And I found it very hard to incarcerate people. That was really, really difficult, because I had been incarcerated, not only in the ghetto or in a concentration camp, but in actual prisons. And since the judge is not supposed to have a criminal record, most American judges have never been in jail, so that made me different. I mean, there are many areas where who you are has an effect.

Stereotypes are not based on individual conduct, but based on belonging to a particular group. What you bring to your assessment of people plays a part in that. Do you assume that certain types of people always lie and others don't, for example? If you use stereotype, you do that. If you don't, then you try to rely much more on individual factors.