As the OSCE's advisor on antisemitism, Kathrin Meyer worked to increase awareness by creating educational programs for students and by promoting Holocaust remembrance. 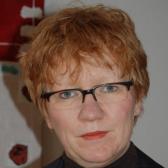 As the OSCE's advisor on antisemitism, Kathrin Meyer worked to increase awareness by creating educational programs for students and by promoting Holocaust remembrance.

KATHRIN MEYER:
There's a strong desire in quite big segments of German society that would like to draw a line now and say, "Ok now let's look forward and not look backward anymore."

And I have to say that dealing with human rights violations today and also looking at what's going on in this world, I think that we should not forget. And we definitely have to keep the memory alive and I think that is a German responsibility to do.

DANIEL GREENE:
In 2004, the Organization for Security and Cooperation in Europe, or OSCE, hired Kathrin Meyer to be its adviser on antisemitism. While she was at the OSCE, Meyer worked to increase awareness about antisemitism by creating educational programs for students and by promoting Holocaust remembrance. Today, Meyer is executive secretary of the Task Force for International Cooperation on Holocaust Education.

Welcome to Voices on Antisemitism, a free podcast series of the United States Holocaust Memorial Museum made possible by generous support from the Oliver and Elizabeth Stanton Foundation. I'm Daniel Greene. Every other week, we invite a guest to reflect about the many ways that antisemitism and hatred influence our world today. From Washington DC, during her recent visit to the Holocaust Memorial Museum, here's Kathrin Meyer.

KATHRIN MEYER:
The OSCE is the Organization for Security and Cooperation in Europe. And the participating states committed themselves to combat antisemitism because they admitted that antisemitism poses a threat to democracy, civilization, and the security in the region.

If minority rights are not being protected, and if people are being attacked on the street, in their community centers, in their schools on the basis of religious, ethnic, cultural hatred or prejudice, that is a security issue, because these patterns spread.

I mean, if you look at our latest hate crime report about the year 2006, there are many schools in several countries where students were really under attack by their fellow students and had to be protected either by the police, or they changed their school.

And we also see for example that to call someone "Jude"—so "Jew"—that's a very popular swear word in Germany.

And it is also connected I guess to these kind of swear words being used in sports. So it's a classic in many European countries that the referee, for example, is called "Jew" if he makes a decision that is not liked. So racism, antisemitism, especially in the field of football in Europe, is a really big problem.

They have even in Germany a famous song about building a subway directly to Auschwitz for the fans of the other team. And thousands, thousands and thousands of people sing this song.

And this phenomenon is one of the things why some teachers in some European countries do not want to teach about the Holocaust anymore because they do not want to have these kind of comments in the classroom and they don't know how to address it and what to do. But at one point we have to break the circle.

I grew up in Germany in a small town very close to the concentration camp of Bergen Belsen, and when I went to school in the 1970s and 1980s it was already mandatory for schools to visit the site and Holocaust education was part of my curricula. And I think it became a very strong part of my identity that this is the history of my ancestors and I just felt the need to do something about it.

And as a youngster, when I was 15, 16, 17, traveling Europe, I was always ashamed saying that I'm German. But ever since I'm in this field, I have the feeling that I face our past. And that if you face your fear and you deal with it, you can overcome it. And I think this is healthy for a society to face even though the worst parts of the past and to deal with that.