Best-selling author Karen Armstrong is convinced that people of different religious traditions must realize that they share the same questions and the same values. 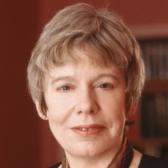 Best-selling author Karen Armstrong is convinced that people of different religious traditions must realize that they share the same questions and the same values.

DANIEL GREENE:
Karen Armstrong entered the convent as a young woman, but she left in 1962, troubled by the restrictive environment and what she describes as an atmosphere of "unskillful spirituality." For years, Armstrong turned away from religion altogether, and she says she felt revulsion even at the sight of a religious book. But today, Armstrong has become a best-selling author of such books, writing histories of all the great world traditions as well as A History of God. Though she describes herself as a "religious convalescent," Armstrong is convinced that people of different religious traditions must realize that they share the same values and the same questions.

Welcome to Voices on Antisemitism, a free podcast series of the United States Holocaust Memorial Museum. I'm Daniel Greene. Every other week, we invite a guest to reflect about the many ways that antisemitism and hatred influence our world today. Here's author and historian Karen Armstrong.

KAREN ARMSTRONG:
There's a wonderful story told about Auschwitz that one night the Jews sat with their rabbis and put God on trial. And this is a God who's supposed to look after His people, who is supposed to be full of compassion for the human race, supposed to be all powerful. And they look around this unfolding horror. And they judge God worthy of death and put Him to death. And then the rabbi says that "God is dead, and it is now time for the evening prayer." And that is a profound religious moment, I think, which is God is inexpressible, incomprehensible, undefinable by us. Ideas about God can live and die. But the prayer, the struggle to understand, even in the darkest moments of life, that effort continues and makes us human.

Religion is not supposed to provide certainty. The Chinese are very strong on this, that when you are, when you say that you are certain, this is usually ego. Because there can be no certainty about God. Nobody has the last word about God. God exceeds our dogmatism. God exceeds our limited little ideas. God is what the Jewish mystics call Ein Sof, without end. And we are plunging into mystery. And that if we try to limit God and make Him fit neatly into a simplistic ideology, then we're cutting God down to size. And that's where some of the worst religious atrocities happen.

The Crusaders used to go into battle crying, "God wills it!" when they murdered and slaughtered thousands of Jews and Muslims. Now obviously God, whatever God is, did not desire anything of the kind. What the Crusaders were doing were projecting their own hatred and loathing of these rival faiths onto an imaginary being, an idol that they had created in their own image and likeness. And though there are not many Crusaders around today, there are, you often hear, you know, preachers or radio pundits saying, "God wills this," or "God hates that." And it's uncanny how frequently the opinions of the deity coincide with those of the speaker. We can make God fit exactly our own ideology, do exactly what we want, and that is a great religious temptation.

You see the religions at their best—three little words that we always have to mention when we're speaking of religion: "at their best"—the religions are all designed to help to curb this murderousness within us by recognizing that every single human being is sacred and inviolable. Now once you lose that sense, this is what Auschwitz is. And in some uncanny way, the whole imagery of the concentration camp repeats the imagery of Hell that had haunted Europeans since the Middle Ages: the darkness, the whips, the jeering, the terrible sulfurous smell. These are images of inferno. And in this modern replication of inferno, of Hell, you have a sense of what happens when you lose the sacred. That doesn't mean you have to subscribe to a particular conception or theological notion of God, but what you have to understand is the absolute sacredness of every single human being whatever race or ideological or religious persuasion he or she belongs to.

All our traditions developed at times of terrible violence. And what I discovered in my researches was that in every single case, the impulse for major religious change that resulted in what we call the major world traditions, the major world faiths, was, in fact, a revulsion from that violence and a disciplined attempt to mitigate the violence in the human psyche, to look for the causes of violence and hatred in our selfishness, greed, our endless preoccupation with self.

So in a sense it's an acknowledgement of our violence, and an attempt to transcend that violence and hatred, where you feel a sense of great tension and fighting through towards peace and beauty. Not by turning your eyes away from violence and saying that everything is wonderful and we are lovely human beings. That's ridiculous. But by going through that experience in our own hearts, coming through it and recognizing that there, but for the grace of God, go I. We could all become terrorists if we did not try to hold ourselves in check, did not try to examine, first, ourselves before we condemn the other.