Iván Fischer has received a lot of attention around the world for his recent opera "The Red Heifer," based on a 19th-century blood libel case. The opera has been polarizing in Hungary, where antisemitism and anti-Roma sentiments are on the rise. 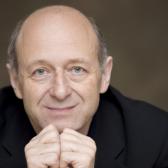 Iván Fischer has received a lot of attention around the world for his recent opera "The Red Heifer," based on a 19th-century blood libel case. The opera has been polarizing in Hungary, where antisemitism and anti-Roma sentiments are on the rise.

ALEISA FISHMAN:
Iván Fischer is music director of both the Budapest Festival Orchestra and the Konzerthaus Berlin. He has received a lot of attention around the world for his recent opera "The Red Heifer," based on a 19th-century blood libel case. The opera has been polarizing in Hungary, where antisemitism and anti-Roma sentiments are on the rise.

Welcome to Voices on Antisemitism, a podcast series from the United States Holocaust Memorial Museum made possible by generous support from the Elizabeth and Oliver Stanton Foundation. I'm Aleisa Fishman. Every month, we invite a guest to reflect about the many ways that antisemitism and hatred influence our world today. From Budapest, here's Iván Fischer.

IVÁN FISCHER:
Well, I wrote this year an opera called The Red Heifer and it has to do with a 19th-century historical fact. And what happened was a young girl disappeared in a Hungarian village called Tiszaeszlár. And after this 14-year-old girl disappeared, there was gossip in the village that the Jews killed her. And it was picked up by a few politicians and more influential people who fabricated a blood libel accusation. And the police picked up all the Jewish men in the village and put them in jail for about a year. And this court case became extremely famous and well-known all over Europe. Everybody was crying out that "What on earth are those Hungarians doing? They are back in the Middle Ages with this type of beliefs that Jews would kill a Christian child for ritual purposes."

[From "The Red Heifer" in Hungarian] The point is we must not lose the Tiszaeszlár trial or else Christians won’t be allowed to speak their minds for fifty years here to come...

One of the sons of these extremely poor Jewish villagers turned against his own family and appeared as a crown witness in this court case, accusing his own father and the others of murder.

Ultimately, these Jewish people were acquitted and that led to a lot of antisemitic riots in Hungary. And this boy returned to his family and later—about 20, 30 years later—he told a journalist that he was tortured and used by people who fabricated the accusation.

[From "The Red Heifer" in Hungarian] When Eszter Solymosi entered our house, she was wearing a frayed whitish scarf on her head, a reddish scarf, a whitish tunic and a bluish skirt....

This story is well-known in Hungary. There are two or three films about it, theater plays. So this is not new. But on the other hand, recent developments, the emerging radical right, the emerging racial hatred in Hungary and also this very blurred, confused memories people have of the Second World War and the Holocaust in general, somehow made it more clear to me that this is the right moment to write this, because these problems seem to emerge again and they make this historical story relevant.

One of the main problems of Hungary is a frustrated nationalism. Hungary was part of the Austro-Hungarian Empire. The whole empire collapsed in the First World War and Hungary lost a lot of territory. And that led to a very sad history in the Second World War, because when Hitler and the Nazis emerged, the Hungarians became an ally of the Nazis because they hoped that the Nazis will help them to get back those lost territories.

And it was in 1944, in the very last months, the last half-year of the war that the Hungarian Jews were collected, deported, and killed. If there would have been resistance against the Germans, Hungarian Jews could have been saved, but they were not saved. And even since then this is a controversy in Hungary, because a large part of the Hungarian population doesn't admit their guilt in this sad story. They think it's only the fault of the Germans, but it's not true. And there is another part of the story that it was so late that from the Hungarian villages and small towns half-million Jews were deported, but about a hundred thousand Jews survived in Budapest—the largest community anywhere on continental Europe—because it was too late to kill them, to deport them. And many of them, having lost their families, they were very happy to see the invading Soviet Army and that created a new wave of antisemitism in Hungary.

[From "The Red Heifer" in Hungarian] You poor miserable people, I’ll tell you the cause of your misery: “The Jew.”

I don't really imagine that my opera would make any difference in the general feeling of Hungary, but it shows a mirror to the society that nothing has changed since Tiszaeszlár. When we performed it, there was a fantastic success and people were touched by it; it's a very moving story. But of course sympathetic people came to the theater. So maybe I was preaching to the converted there. However, it was reported all over in the press, everywhere in the world, and I received the most polarized personal messages. I had a lot of hate mail and really vulgar accusations from the radical right, and lots and lots of congratulating thankful mail messages from the other side.

And now with this recent development, this shift to the right, I have the dilemma of living here or not. Because of this new nationalistic brainwashing educational system the present government has introduced, I certainly don't want my children to go to those schools and learn what is taught there, so we decided that the family should move to Berlin. On the other hand, I do want to keep working here. Because there is a large audience here who come to my concerts and they hang on to it. They absolutely need this. Only the artists, only cultural people, only independent people can draw the attention of the world to the problem that there is a growing danger of racism in Hungary and people should be very aware of this danger.