A few years ago, Glenn Kurtz discovered a reel of film in the closet of his parents' home in Florida. Only three minutes long, the footage shows his grandfather's hometown of Nasielsk, Poland, in 1938. The clip has become surprisingly important—both historically and personally. 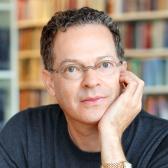 A few years ago, Glenn Kurtz discovered a reel of film in the closet of his parents' home in Florida. Only three minutes long, the footage shows his grandfather's hometown of Nasielsk, Poland, in 1938. The clip has become surprisingly important—both historically and personally.

ALEISA FISHMAN:
A few years ago, Glenn Kurtz discovered a reel of film in the closet of his parents’ home in Florida. Only three minutes long, the footage shows his grandfather’s hometown of Nasielsk, Poland, in 1938. The clip has become surprisingly important—both historically and personally.

Welcome to Voices on Antisemitism, a podcast series from the United States Holocaust Memorial Museum made possible by generous support from the Elizabeth and Oliver Stanton Foundation. I’m Aleisa Fishman. Every month, we invite a guest to reflect about the many ways that antisemitism and hatred influence our world today. Recorded during a visit to Washington, DC, here’s Glenn Kurtz.

GLENN KURTZ:
In 2008, I was actually writing a novel, the plot of which was that a young woman living in Vienna discovers an old home movie in the flea market, and becomes obsessed with the people in these images and tries to discover who they were. And as a result of some of the research that I did learning about how film deteriorates, I remembered that my own family had some home movies.

Among these films was this 1938 home movie that my grandparents shot during a trip that they took to Europe. And there’s a title sequence at the beginning that says, “Our trip to Holland, England, France, and Poland, 1938.” Just those two words: “Poland 1938.” I thought that this was something extraordinary. And when I saw the images, I got chills and I was kind of overwhelmed. There’s three minutes of a small town in Poland in the summer of 1938.

There are such beautiful pictures of children waving for the camera and adults sort of laughing and pointing, and I thought all of these people have, in essence, one year to live. All of these people are standing at the precipice. So I knew I wanted to save the film, so I donated it to the U.S. Holocaust Memorial Museum, which undertook the restoration of the original film and digitized it eventually. And I started to search to see if I could possibly identify the people in these very haunting images.

I searched for two years and I was unable to find out who was in the film. Until I got an email from a woman in Detroit, out of the blue. She had found the film online, and as she watched it, she recognized her grandfather as a 13-year-old boy in the crowd of boys waving in front of the camera. And he’s still alive. He just celebrated his 90th birthday. And when I finally spoke with this gentleman, Maurice Chandler, it’s like he had been waiting his whole life to talk about this town. He had survived the war alone in his family, and in hiding, so he wasn’t able to preserve any information about his prewar life. And this was just, like, this time machine. He was able to identify people and tell stories about their lives. And after I met Mr. Chandler, ultimately, I found seven additional survivors. He was able to provide this bridge between the names and documents, and the images and the faces in the film.

When my grandparents visited Nasielsk in 1938, there was approximately 3,000 Jews who lived in this town of maybe 4,500 people altogether. After the Germans occupied the town, which they did immediately after the invasion of Poland—the invasion of Poland was the 1st of September 1939—and by the 4th of September, they had occupied Nasielsk. That territory became part of the Reich proper. So there was a tremendous push to deport the Jews from the towns in this area immediately. So it was on December 3rd, just a few months after the invasion, that the entire Jewish population of Nasielsk was deported. Of the 3,000 Jews who had lived there when my grandparents visited in 1938, fewer than 100 survived the war.

So when I started researching, I thought that I was going to be creating a memorial to this lost town. The most astonishing thing that happened, I think, in the course of this research was that I found people. I found these seven survivors and I’ve become quite close with many of them and their families. And ultimately, this research brought together a community of maybe 100 or more people, all of whom draw their ancestry from this town. So what was most amazing to me was that, while it is also a story about the loss of this town, it’s in many ways a story about the reunions that were created as a result of bringing the fragments that remain together. And it was a story also about building a community of people who together hold the memory of this town as a living thing.

We’re living in the moment in history when living memory of the Holocaust is going to pass away, when the survivor generation will no longer be with us. And the thing about film is that it captures individual people at a particular place at a particular moment. But if we don’t know what we’re looking at, we say, “Oh, it’s Polish Jews before the war,” which is terribly general. But if we’re able to make it specific, if it’s only that I can give this face a name, it changes what we are seeing when we look at it. And it makes what is otherwise a sort of documentary history into something that’s personal. And I think that any access that we have to the personal connections to what happened is important for the generations that come after the survivors are no longer with us.

A special video produced by the Museum after Maurice Chandler's daughter identified him in the film may be viewed here.