Edward Linenthal believes memorials serve a complex and important role in society, to help us mourn and remember, but also to encourage a dynamic engagement with history. 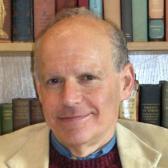 Edward Linenthal believes memorials serve a complex and important role in society, to help us mourn and remember, but also to encourage a dynamic engagement with history.

EDWARD T. LINENTHAL:
I think there's a therapeutic dimension to memorials, a sort of healing dimension, in which memorials become an immediate language of engagement after an event, rather than just a distant expression of commemoration.

ALEISA FISHMAN:
Edward Linenthal believes memorials serve a complex and important role in society, to help us mourn and remember, but also to encourage a dynamic engagement with history. Having written about or consulted on a number of sites—including Gettysburg, the Holocaust Museum, and the Oklahoma City bombing memorial—Linenthal is now editor-in-chief of the Journal of American History and a professor at Indiana University.

Welcome to Voices on Antisemitism, a podcast series from the United States Holocaust Memorial Museum made possible by generous support from the Elizabeth and Oliver Stanton Foundation. I'm Aleisa Fishman. Every month, we invite a guest to reflect about the many ways that antisemitism and hatred influence our world today. From Bloomington, Indiana, here's Edward Linenthal.

EDWARD T. LINENTHAL:
It's very difficult, I think, to both commemorate and to present a kind of dispassionate, messy, complex history. Commemoration is often personal and intimate. It prizes first and foremost the experience of eyewitnesses, of those who were there, of those who in many cases were seared with acts of violence. It tries to create narratives that are redemptive and have meaning that combats the violence of the Holocaust, or the bombing in Oklahoma City, or the mass carnage at battlefield. The historian is interested in many different narratives that may or may not be redemptive. But I think the most powerful places are places where people are not presented with pat answers to questions that have no answers.

It's an interesting question to think about how you create a memorial that doesn't create more hate. And I don't know that there's any guarantee about that. One hopes that visitors will respond in constructive ways, ways or that you would hope that they would respond to reflect on the destructive power of violence, be it antisemitism, be it other forms of racism and not have a place spark sort of violent feelings within. But at some point, you can't ensure what people come with to these places and what people take away. I remember, before the Holocaust Museum was opened, the real concern among a number of people on the staff that the power of Nazi symbolism, where you have Nazi music and Hitler's voice. Couldn't somebody go, "Wow, this is pretty neat!" Couldn't somebody be intoxicated by the power of the Nazis? Well, of course they could. But that's not a reason not to do the exhibition. Out of respect for the commemorative sensibilities of survivors, the Museum's Permanent Exhibition early on had almost no perpetrators at all. It was as if millions of people were leading themselves to their death. And that's not the story of the Holocaust. So uncomfortable as it was, there are now all kinds of very powerful photographs of perpetrators at work. But the fact is these places are going to elicit very, very strong emotions. And I don't think there's any way in which you can kind of control what people do with what you present.

I think there's a danger that when we create very powerful memorials, we are then satisfied that the memorial will do our remembering for us. And we kind of abdicate our own sense of continued engagement with issues that that arise, difficult issues to be wrestled with all the time. The powerful nature of evil, questions about human nature, questions about how human beings can do what they do. And not just say well, we've memorialized the Holocaust. We have memorialized 9/11. The memorial will remember all that for us. The memorial has and will continue to deal with all of that. That fossilizes and contains.

But I have to remind myself that my undergraduate students now were very, very young when 9/11 took place. What's the Holocaust Memorial Museum going to mean to them? What's Oklahoma City going to mean to them? One of the things that we do to keep these things relevant is to look at the kind of core human experiences that are common and draw those out while anchoring them in a particular history. This history can be shared and this history can be interpreted and transformed by others who resonate with the power of that experience. And I think there are all kinds of ways in which, if memorials invite people in and think about their stories as representing a whole variety of powerful, sometimes troubling, examples of human experience, they obviously remain relevant because human experience goes on and on.