Daniel Owen is a photojournalist who spent two years documenting the life, culture, and celebrations of the Jewish community of Oradea, Romania. The Jewish population there has dwindled from a high of 30,000 in the 1940s—or one third of the population of the city—to only a few hundred today. 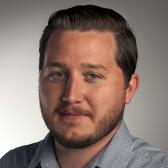 Daniel Owen is a photojournalist who spent two years documenting the life, culture, and celebrations of the Jewish community of Oradea, Romania. The Jewish population there has dwindled from a high of 30,000 in the 1940s—or one third of the population of the city—to only a few hundred today.

DANIEL OWEN:
One of my main goals in documenting the Jewish community of Oradea was that—being the 70th anniversary of the Holocaust—I don’t know how much time we’ll have left with these members, who had the firsthand experiences and the knowledge of the life before the Holocaust or during. Ten years from today, most likely, we won’t be able to go back and talk with them again, so all we’ll have is what we’ve already done.

ALEISA FISHMAN:
Daniel Owen is a photojournalist who spent two years documenting the life, culture, and celebrations of the Jewish community of Oradea, Romania. The Jewish population there has dwindled from a high of 30,000 in the 1940s—or one third of the population of the city—to only a few hundred today.

Welcome to Voices on Antisemitism, a podcast series from the United States Holocaust Memorial Museum made possible by generous support from the Elizabeth and Oliver Stanton Foundation. I’m Aleisa Fishman. Every month, we invite a guest to reflect about the many ways that antisemitism and hatred influence our world today. From Athens, Ohio, here’s Daniel Owen.

DANIEL OWEN:
My wife, she’s actually originally from Oradea, Romania. And I had been with her visiting her family back in the city. And I remember, one of the buildings that I saw… I looked over and I saw this massive synagogue. It was the Zion Neologic Synagogue. I didn’t know of a Jewish community in Oradea, currently. And I thought, “For such a large structure—I mean, it’s a thousand-seat synagogue—there must be quite an interesting story.” And I began to really start to research about who was this community, and where are they now? 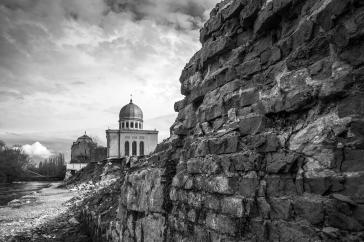 And I realized that what I want to do is really tell the story of this Jewish community in the city of Oradea past, present, and future; and not just highlighting a few terrible years of the Holocaust. Because my story really talked about the whole community, I spent a lot of time with survivors and also young people, and kind of really a mix of everybody. I also spent a lot of time documenting contributions of the community throughout its history.

This generation is going now. And when I had heard that some members of the community that I had the honor to meet and to photograph and to sit down and talk with had passed away, I really did get this sense of urgency, that there’s not a whole lot of time out there to photograph and to document the individuals from other communities, all across Romania, because Oradea’s just one city. But all across Romania, there are hundreds and hundreds of Jewish communities that are either no longer existing or very small, and their future’s just as uncertain. And so I had this sense of urgency, to really go back and to spend a lot of time documenting other stories, and preserving them for future generations. 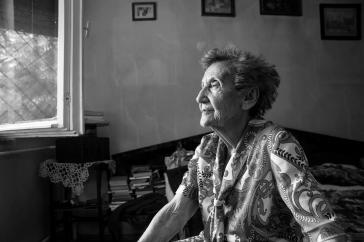 There was a photograph that was one of the last photographs that I took during my time with the community. It was during a Shabbat celebration, and it was in the community center. I think there were a few children that were getting their bar mitzvahs. And I remember seeing this magnificent mural behind them that depicted the history of the Jewish people. Right behind all these tables and these families was a mural of a family at a table, and they were eating what looks like a Shabbat dinner, and all this other history with Auschwitz and the train, and all that is on this mural. And, really, it was a photograph that, to me, really is… this is the community. This really defines this community. It’s a small community with this mixed history, some wonderful and some terrible, but here they are, together, celebrating bar mitzvahs, and how much hope they put in that. And it was a beautiful moment. 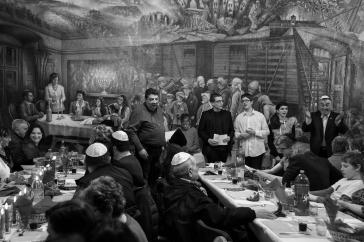