In rebuilding the World Trade Center site in New York City, Daniel Libeskind is striving to combine a story of tragedy with one of liberty and resiliency. 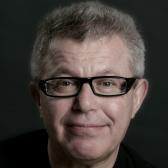 In rebuilding the World Trade Center site in New York City, Daniel Libeskind is striving to combine a story of tragedy with one of liberty and resiliency.

DANIEL LIBESKIND:
I've often felt that architecture is really privileged because it's really an optimist's profession. As a writer, as a filmmaker, as a poet, as a musician, you could have a pessimistic view of the world. But as an architect, you always have to have an optimistic view, because you're always building something for a better world. Whenever you construct something, the very notion of constructing is about a faith that the world can be a better world.

DANIEL GREENE:
Architect Daniel Libeskind seeks to create hope in spaces of absence. The building he designed for the Berlin Jewish Museum evokes memory and loss, while insisting by its very presence that Germany confront its nation's history. In 2003, Libeskind won the competition to rebuild the World Trade Center site in New York City. He’s striving there to combine a story of tragedy with one of liberty and resiliency.

Welcome to Voices on Antisemitism, a free podcast series of the United States Holocaust Memorial Museum. I'm Daniel Greene. Every other week, we invite a guest to reflect about the many ways that antisemitism and hatred influence our world today. From his office overlooking Ground Zero in Lower Manhattan, here's Daniel Libeskind.

DANIEL LIBESKIND:
Well, what motivated me was the importance of Jewish history and the horrors of the Holocaust. And this was not a project I had to research in libraries or archives, because I come from that background. My parents were Holocaust survivors and I, myself, grew up under Communism and antisemitism in Poland.

So creating a project that spoke to that history, to the fact that, number one, the Holocaust stemmed from Berlin. Six million Jews died because of the horrors of that place, but also to give hope, to understand what Jewish history was. That Jews were not only victims, but were successful citizens of Germany, of Europe. They contributed in every way to the successes of that place, economically, culturally, artistically. And to see how we can go forward in some way across the abyss that is irreversible. The extermination cannot be undone, but what can a city do? What can a country, what can Europe do to not just remember that history but deal with it effectively today?

In my view, architecture is a communicative medium. To me, it's a storytelling medium. And I attempted to create a building that told that complex story in many different ways. It talked about the dead-end of Germany, of Europe in that period, that dead-end when people were treated as just numbers and to be exterminated because they were Jews. I talked about exile. That so much of Berlin has been exiled outside of Germany. And Berlin, itself, was exiled out of itself. And, of course, also to the continuity, and the vulnerability of that continuity, across these cataclysms towards a new society and a new period of hope in Europe and in Germany.

And to use the building really as an educational tool in synergy with exhibits. As you walk through spaces, you're informed by light, by proportions, by echoes, by the void, which is really a central feature of the building. It's, I think, the only building that has ever been built where in the center is not an atrium to bring the public together but is a space of absence. And I wanted to really present there in the echoes of those footsteps the fact that much of the story cannot be told in any exhibit because the spiritual carriers of the story are not there. It's about the absence, the extermination. At the same time, of course, around you are the exhibits that continue to sort of view the city and Germany in a new way.

To me, the most ironic part of my experience was that I worked in Berlin for many, many years on the Jewish Museum. And it opened on September 11th, 2001. That was the first day it opened to the public. And I remember going to my office and turning to my wife and partner, Nina, and people in the office, and I said, "You know, this is the first day I don’t have to think about the Jewish Museum, because now it's open, now the public -- I don't have to think about it. Now I can do other projects." And then at 2:30, you know Berlin time, which is 8:30 New York time, when those attacks happened, I suddenly realized, you know, history is interconnected. It's not disconnected. There are strange relationships. The museum opened and, of course, the museum closed almost immediately. There was such uncertainty in Germany and what that attack meant. And I thought, you know, you can never just say something is over. As Faulkner said, "History is not in the past." It hasn't passed. It's in the present and in the future. So it's not something that can ever be just put to rest and into the past. We have to permanently see its implication and what picture -- what horizon has it opened into the world.

As an architect, urban planner, I think, my view is that people have to understand what that area means. It's not business as usual, just some more big buildings. It's not to erase that tragedy, but to inscribe it in a way that is meaningful, that will tell that story, that will be memorable.

And, again, the Berlin Museum is right on Lindenstrasse, and it's connected with all the Germans and Jews, the famous Germans, famous Jews, but also the hundreds of thousands of others who are not so famous, who lived around that site, suffered, and are part of the site.

The same, but on a different scale, is true in New York City. This is not an abstract site. It happened right here. Right here, between Liberty and Church Street. How incredible those two names of streets, representing the openness of America.

The sites cannot be allowed to die because the sites continue to speak, and they have to be nurtured in order to be able to tell their story by rooting a building in its genius loci so to speak. In its embeddedness, and in the fact it cannot be transposed to another site. That where you're standing, whether it's New York, or in Berlin, or Osnabrück, you're standing in a particular place in the earth, which is meaningful across history, and you're there with the spirits of those who might have perished. And every person standing there has to know about it, has to be informed, and has to identify with something that is positive, something that can move life forward in a positive direction rather than simply be stuck in a void.

I think architecture is a dialogue. It's not a monologue. It's not just an artifact of stone and concrete and glass. It's a device, which, like all classical buildings, it does tell you a story, and it has to have many layers. It's more like a book. Architecture has to deal with infrastructure and with materials, air-conditioning, and electricity. But ultimately, that's not what it's about. It's a cultural medium. It has to be able to communicate.

And, you have to make sure that what is built is responsive to people's deepest hopes and deepest aspirations. That it isn't just a surface phenomenon. It's not just something standing and occupying space, but something that is able to respond to those desires and that those people stand there at Ground Zero looking on a rainy day, on a cold day, in great numbers, they are communicating with the site. And I think architecture has to support that. It has to make it a positive experience. And history is not just something, which is a story either with a good ending or a bad ending. It's a story that involves our actions at every moment, our ethical actions, our intellectual actions, our physical actions, our relationships to fellow human beings.