Ayaan Hirsi Ali describes herself as a "dissident of Islam." Despite threats to her life, Ali remains outspoken about freedom of expression, hatred of Jews, and reform of Islam. 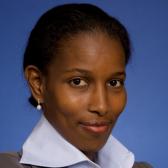 Ayaan Hirsi Ali describes herself as a "dissident of Islam." Despite threats to her life, Ali remains outspoken about freedom of expression, hatred of Jews, and reform of Islam.

AYAAN HIRSI ALI:
Living in Kenya, through all forms of media came this one simple—but repeated over and over again—this message that Jews were bad and inherently evil. So poor people in, shall I say underprivileged countries, are getting a daily meal of hatred. And, in a way, I would say, can you blame them? Can you blame my mother for believing this if she has never heard anything else before?

DANIEL GREENE:
Ayaan Hirsi Ali describes herself as a "dissident of Islam." Born in Somalia, Ali sought political asylum in the Netherlands in 1992 to avoid an arranged marriage. There, she studied political science and eventually rose to a seat in the Dutch Parliament. In 2004, Ali collaborated with director Theo Van Gogh on the film Submission, which casts a critical light on Islam's treatment of women. Following the release of the film, Van Gogh was murdered by an Islamic extremist, and Ali received threats to her life. Now, as a resident fellow at the American Enterprise Institute in Washington, D.C., Ali remains outspoken about freedom of expression, hatred of Jews, and reform of Islam.

Welcome to Voices on Antisemitism, a free podcast series of the United States Holocaust Memorial Museum. I'm Daniel Greene. Every other week, we invite a guest to reflect about the many ways that antisemitism and hatred influence our world today. Here's politician and activist Ayaan Hirsi Ali.

AYAAN HIRSI ALI:
I didn't learn, or I didn't think of Jews as people. To us they were Satan/Sheitan. And, as a child, because I didn't grow up around Jewish people, I only had my imagination left to me. And the way the Jews were described—the picture was always a huge head with a large nose, and inside the head of this Sheitan, this Jewish Satan was balding, and there would be a valley in the middle, and there are little Sheitans or little evil genies, little evil spirits would come out. And they were very naughty and they would seduce us into committing sins, and luring us from fulfilling the obligations of Allah. So, for example, if I, instead of going to pray, I went to play with my friends, it was a little Jewish Satan that made me do it.

In 1992 I came to the Netherlands, and I was with a friend in Antwerp. We were just walking around the streets and he said, "We are in the Jewish neighborhood," and I froze.

And he said, "We are in the Jewish neighborhood."

And I said, "Are there little Jews here?"

And he pointed out to a cluster of people, and he said, "For example, the man there."

And later we got introduction to history, so I got an introduction to the Second World War, the Holocaust, the concentration camps, the gassing, and so on. And I was not only appalled at what had happened and the stories, but I was also deeply ashamed because at the time—it was in the Dutch context—it was all about trying to work out what had gone wrong in the 1930s and in the 1940s. How could Dutch people have exported so many people to their death? And is it in everyone, or was it only the German psyche? And I was just quiet and ashamed and thinking that if I had lived in the 1930s growing up as I had done with the belief that Jews are evil, that I might as well have participated. And I know a huge number of people who would have participated.

There is no competition with radical Islam, and with the spread of hatred against Jews that it brings about. The hatred against Jews is not something that's being spread by private agents, but it is public policy. I mean I remember living in Saudi Arabia, and Jews were spoken of in the official press, in the official state media, as evil as people that should be hated. The rhetoric is similar to the rhetoric of the one I had been introduced to of the Nazis—Jews as people who control power, who control people's minds, money, and the media, and this conspiracy of Jews to destroy Islam.

And I think that it is for us to shed that barrier and spread a different message of hope and humanity.