After his grandmother’s death, Arnon Goldfinger stumbled upon evidence of a long-term friendship between his Jewish grandparents and a Nazi officer. In his documentary The Flat, he tries to make sense of this relationship, exploring how silence resides in both victims and perpetrators, and how, sometimes, it can shape a family history. 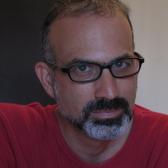 After his grandmother’s death, Arnon Goldfinger stumbled upon evidence of a long-term friendship between his Jewish grandparents and a Nazi officer. In his documentary The Flat, he tries to make sense of this relationship, exploring how silence resides in both victims and perpetrators, and how, sometimes, it can shape a family history.

ALEISA FISHMAN:
After his grandmother's death, Arnon Goldfinger began to film the process of sorting her belongings. He intended only to record a family archive, but the footage became the award-winning documentary The Flat. Goldfinger had stumbled on evidence of a long-term friendship between his Jewish grandparents and a Nazi officer. In trying to make sense of this relationship, he explores how silence resides in both victims and perpetrators, and how, sometimes, it can shape a family history.

Welcome to Voices on Antisemitism, a podcast series from the United States Holocaust Memorial Museum made possible by generous support from the Elizabeth and Oliver Stanton Foundation. I'm Aleisa Fishman. Every month, we invite a guest to reflect about the many ways that antisemitism and hatred influence our world today. From Tel Aviv, here's Arnon Goldfinger.

ARNON GOLDFINGER:
It all started when my grandmother passed away. And she lived in the same flat for 70 years in Tel Aviv. For me, to come and visit my grandmother was like coming and visiting another culture, because everything in the flat was from Germany: the books, the paintings, so many gloves and furs, and hats, and all those things you cannot really use in Tel Aviv, because it's too hot over here. And she spoke German. She never mastered Hebrew. And every year, my grandparents took the plane and went to Germany, like two-three months, every year in Germany. When I'm thinking about it now, it's completely unique, because in Israel at that time, there was a real boycott against everything from Germany. I'm telling this to try to explain how difficult it was for them to be part of this place.

In the beginning of the film, you realize, and I realize in reality, how little I knew about my grandparents. The first surprise was we found a very strange newspaper in my grandparents' flat. It was strange because it has a swastika on it. It was called Der Angriff, and it was a very extreme Nazi propaganda paper. And in it, I found a story called "A Nazi Travels to Palestine." And this is the headline of the first meeting between my grandfather, Kurt Tuchler, and Leopold von Mildenstein.

So my grandfather, my grandmother Gerda, and the von Mildenstein couple, went on tour together to Palestine, and they spent here two months, and toured the country. So this was really the beginning of this strange relationship. And I think they just became friends on this journey. You know, you're sitting with the same guy, and if you look at it in the eyes of this time—it's very hard to do it—but if you try to do it, you can see, it's simply four Germans are going on a tour. Of course, one is Jewish and the other is Nazi, but they were Germans. Later on this von Mildenstein became the first head of the Judenreferat, the Department for Jewish Affairs in the SS. And one of the first guys to join him in this department was Adolf Eichmann.

To find out that my grandparents were in contact with von Mildenstein, before the war, you can explain their relations. Even though at the end of it, von Mildenstein is already dealing in his office of what's to do with the Jewish people. I mean, the guy was going to the SS officers in the morning; afternoon, he could go and take a schnapps with his good friend—Jewish friend—Kurt Tuchler. This is weird enough and raised a lot of questions. But I found out that they really kept in contact after the war. This was a total shock for me, and for everyone.

We found an envelope in the flat with the address of von Mildenstein. And it was clearly from a time much after the war. So I found out from this envelope a phone number, and called the number, and talked with the daughter of von Mildenstein. And she recognized immediately who am I, who are my grandparents, and told me that she knew them, because she met them, after the war, in her parents' house. It was, at the beginning, impossible to understand.

The journey that I took, the quest was, first of all, research for information, for the right information. It was also a psychological research, to understand. You know, one of the things I discovered through the making of the film is that my grandparents, they were not Israelis born in Germany. They were Germans that had to live in Israel. And in their heart, they stayed Germans. And this is something very special about the German Jews, because on the one hand, they were the Jews that suffered. On the other hand, they were part of the nation that committed the crime. So, I think they couldn't really bear it. And for them, they had to find any kind of resolution for that.

So, I believe that when they met von Mildenstein after the war, and he told them one of his alibis, they really wanted to believe in it. For them, it was a kind of a rescue. To really believe that their friend, he understood the Nazis were going on a wrong way, a very radical way, and he decided to quit. They can, as Jews, be his friends again. For him, it was a perfect alibi: "See, the Jews are friends with me. I'm not so bad as anyone could think about me." And I'm not talking here only about an alibi for the public. I'm talking about what a man is saying to himself. I mean, they had to tell themselves stories to soften what they really did.

Before I started the making of the film, if someone would tell me that I'm going to make a film about my family in any connection to the Holocaust, I would say, "It's ridiculous. We have no connection to the Holocaust." It's unbelievable. I mean, I came from a family that everybody knew that my grandparents are from Germany, and they had to escape Germany. We know it. We never thought about it. And if you ask me what denial is, this is denial. I'm talking about myself.

This phenomenon that nobody is speaking, and those hidden feelings, they moved from generation to generation. So this is also something that I thought I owe to my kids. And in the end, you maybe cannot understand everything or solve all of the mysteries from your past, but at least you start to ask about them.