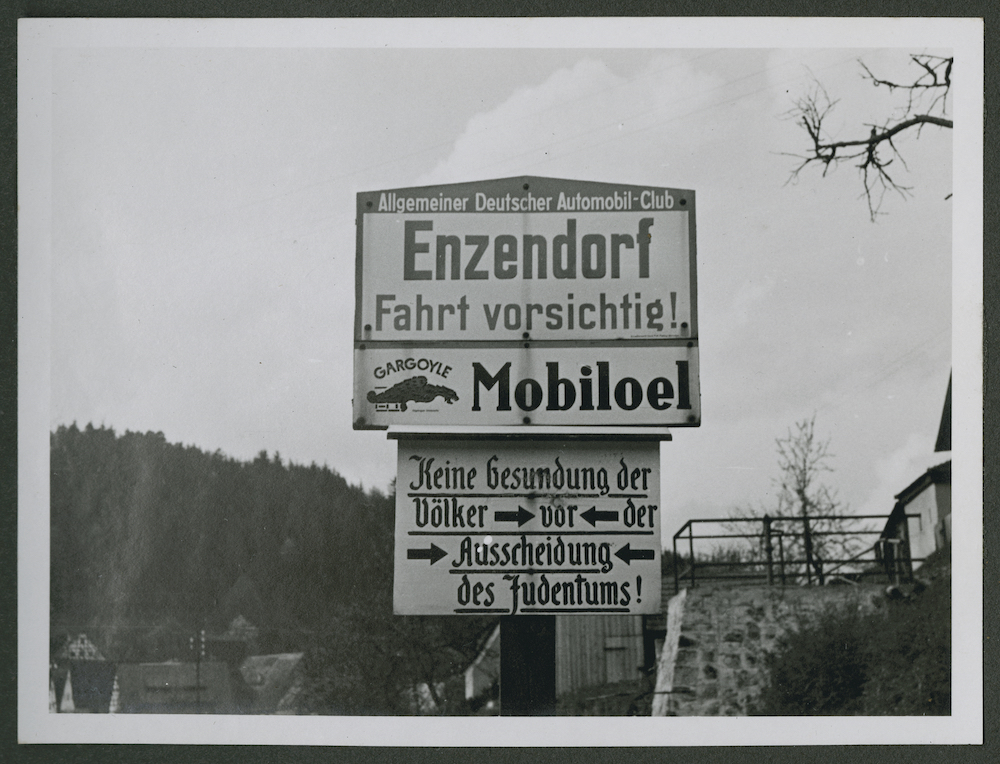 The sign (in German) reads, "Keine Gesundung der Voelker vor der Ausscheidung des Judentums!" [There will be no health for the people until the removal of the Jews.] —--United States Holocaust Memorial Museum, courtesy of John Howell

Prejudice against or hatred of Jews—known as antisemitism—has plagued the world for more than 2,000 years. The Holocaust, the state-sponsored persecution and murder of European Jews between 1933 and 1945 by Nazi Germany and its collaborators, is history’s most extreme example of antisemitism. Yet even in the aftermath of the Holocaust, antisemitism remains a continuing threat. Manifestations of this hatred appear in literature, art, film, speeches, legislation, and on the Internet, as well as in acts of violence.

One of the most notorious and widely circulated examples of antisemitic literature is the Protocols of the Elders of Zion. It purports to be the report of a secret meeting of Jewish leaders planning their domination of the world. Translated into many languages and distributed throughout the world, this document has been thoroughly and repeatedly discredited. Despite this fact, the Protocols continues to circulate today, both in print and online.

The following bibliography was compiled to guide readers to materials on the history of antisemitism and the Protocols of the Elders of Zion that are in the Library’s collection. It is not meant to be exhaustive. Annotations are provided to help the user determine the item’s focus, and call numbers for the Museum’s Library are given in parentheses following each citation. Those unable to visit might be able to find these works in a nearby public library or acquire them through interlibrary loan. Follow the “Find in a library near you” link in each citation and enter your zip code at the Open WorldCat search screen. The results of that search indicate all libraries in your area that own that particular title. Talk to your local librarian for assistance.

The Protocols of the Elders of Zion

When searching library catalogs or other electronic search tools for materials on antisemitism and the Protocols, use the following Library of Congress subject headings to retrieve the most relevant citations: