Wendy Lower is the John K. Roth Professor of History at Claremont McKenna College. Her book Hitler’s Furies: German Women in the Nazi Killing Fields examines how ordinary women participated in the Holocaust, and also how their participation has been systematically downplayed since the war. 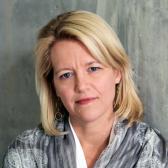 Wendy Lower is the John K. Roth Professor of History at Claremont McKenna College. Her book Hitler’s Furies: German Women in the Nazi Killing Fields examines how ordinary women participated in the Holocaust, and also how their participation has been systematically downplayed since the war.

WENDY LOWER:
We know that in the course of history that women, ordinary women, have become involved in participating in the history of genocide, not only as victims of genocide, but direct perpetrators.

ALEISA FISHMAN:
Wendy Lower is the John K. Roth Professor of History at Claremont McKenna College. Her book Hitler’s Furies: German Women in the Nazi Killing Fields examines how ordinary women participated in the Holocaust, and also how their participation has been systematically downplayed since the war.

Welcome to Voices on Antisemitism, a podcast series from the United States Holocaust Memorial Museum made possible by generous support from the Elizabeth and Oliver Stanton Foundation. I’m Aleisa Fishman. Every month, we invite a guest to reflect about the many ways that antisemitism and hatred influence our world today. From her office in Claremont, CA, here’s Wendy Lower.

WENDY LOWER:
Ordinary German women participated in the Holocaust in a variety of ways. They are mothers and wives. They are professionally emerging in the world of nursing and teaching and secretarial work. So they come out of the post-suffragette era, and they also are understanding, with the loss of men in the First World War, that their futures are not going to be secured through marriage. You know, this is about a period of empowerment for German women, who are critical to the whole mission of the revolution. And people had their designated roles in the revolution—as teachers in the classroom, instructing their students on what constitutes a Jew, what is racially inferior. It’s happening even in the hospitals. The midwives, who upon the birth of a child are obligated to report the defects and the race of that child to the authorities. So it happens in very intimate settings and in very public settings.

And I was really surprised, when I started studying the secretaries, just how significant a role they played: typing up orders, distributing orders, getting involved in selections, moving one file—I mean, just physically moving one paper file—when a decision’s being made about whether or not the person in that file is going to live or die.

And then some of the secretaries became so ambitious. They had career goals, but also wanted to prove their loyalty to the regime, and were also antisemitic and racist. They wanted to actually see, out of curiosity and out of ideological zeal, they actually wanted to see what was going on, and got ever closer to the violence.

There was not the willingness to go after these women in the aftermath of genocide. And I think in that Germany, in particular West Germany and Austria, there was a sense that well, these women were somehow innocent of these crimes. The men came home defeated with blood on their hands, but the women, they can help us rebuild society. There’s a legal history to this as well, that we took a softer approach to women in the courtroom so it also is part of the story of why there was not this kind of deep examination and confrontation. We wanted to hope that women wouldn’t do these things, that they also hadn’t been complicit. And there suddenly you have to ask the question, you know, what was Oma doing? Or what was my mother doing at this time? What did they see and what did they do? And maybe they weren’t so innocent.

The Holocaust was shocking—the viciousness, the bewilderment, the world turned upside down. We tend not to want to believe that women are part of that. But any time that we allow those blind spots to persist, any time that we take a particular grouping and assume that they’re somehow not involved or they couldn’t possibly be involved, we are not taking a good close look at the Holocaust. We’re not taking an honest look, serious look at the history of genocide. That everybody really has to come under scrutiny because it is this incredible phenomenon that sucks in and brings in all of these facets of society in one way or another.