The Power of Propaganda

We're surrounded by propaganda all the time: some of it benign, some of it dangerous. Propaganda was used to devastating effect during the Holocaust and it's worth studying to understand why and how we are vulnerable to propaganda in our everyday lives. This episode is a collage of people discussing their own relationship to propaganda, and the ways in which they guard against it 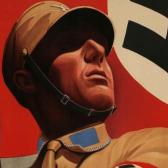 The Power of Propaganda

We're surrounded by propaganda all the time: some of it benign, some of it dangerous. Propaganda was used to devastating effect during the Holocaust and it's worth studying to understand why and how we are vulnerable to propaganda in our everyday lives. This episode is a collage of people discussing their own relationship to propaganda, and the ways in which they guard against it

ALEISA FISHMAN:
Welcome to Voices on Antisemitism, a podcast series from the United States Holocaust Memorial Museum made possible by generous support from the Elizabeth and Oliver Stanton Foundation. I'm your host, Aleisa Fishman.

We're surrounded by propaganda all the time: some of it benign, some of it dangerous. Propaganda was used to devastating effect during the Holocaust and it's worth studying to understand why and how we are vulnerable to propaganda in our everyday lives. Beginning this month, the Museum's State of Deception exhibition on the power of Nazi propaganda will travel the country. Our podcast today is part of that exhibition—a collage of people, young and old, discussing their own relationship to propaganda, and the ways in which they guard against it.

Female #1: I’m particularly cautious about messages that seem to be geared towards me as a mother. Whether it’s commercial advertising or a political campaign, when it’s appealing to protecting your children or doing the best for your children, and they’re putting it in those very, very simple phrases—that’s when I try to perk up and dig a little deeper.

Male #1: Propaganda that is in agreement with what you emotionally or subconsciously believe is the one that you’ll accept with the least amount of checking its credence, checking its truthfulness. When someone is saying something I so emotionally agree with, I say, “Now, wait a minute.” I should say, “Now, wait a minute,” but I’m a human being like everyone else. Most of us will just say, “You know, that’s right. That agrees with my point of view.” So you go ahead and accept it right off. And then of course you pass it on.

Female #2: The most dangerous kind of propaganda is one that turns one group of people against another, or that promotes discrimination or harm.

Male #2: Turning people against one another—that’s certainly the way propaganda was used by the Nazis, and unfortunately it was very, very effective as a means for the Nazis to gain power, and as a weapon.

Male #3: I think the younger that you place a stereotype into a child’s mind, the harder it is for them to get that stereotype out of their mind as they get older. That was one of the things that the Nazi Party did with the education. These things were instilled in them so young—to fight against that is very hard.

Male #4: When I was young in middle school at some point, I was repeating the thing that I would hear it in the street or in the news. I didn’t think why the state or why the state television would lie. But you grow up, you read a lot, and you discover that the people who are in charge of media—they are humans, and they do mistakes. And sometimes the way they are thinking is completely wrong.

Male #5: I think in some ways propaganda is a tool. It of itself is neither hurtful or beneficial; it’s kind of neutral. It’s the message behind it where the harm can really come in. And the Nazi propaganda in State of Deception’s kind of the same way. It’s all these very positive images. You know: industry, people working, people farming, traditional dances, our soldiers all marching in nice lines. And it shows the Nazi state being very strong, being very powerful. But then having the knowledge of what that actually stands for, why they want that image to go out—that’s what makes the hair on the back of my neck stand up.

Teenage female #1: Young people aren’t necessarily different in this way, but I think teenagers are especially vulnerable to that peer pressure thing.

Teenage male #1: . . . and also just thinking about Nazi Germany again, there’s definitely something appealing about feeling like you belong, a very strong camaraderie. And it’s also easy to maybe explain your actions by saying, “Well, I’m part of this group.”

Teenage female #1: The buck doesn’t stop with you. And so, you feel like even if something doesn’t feel quite right, you can . . . you can continue being a part of it.

Teenage male #1: . . . but then be like, “Oh, I was, I was just, you know, I was just doing what everyone else was doing. I was just following everybody else. It wasn’t my idea.”

Teenage female #1: And then once you’re locked into that, it’s so difficult to try and be the different one. Especially when you feel like there’s no other option than this group. Where you feel like, if I step out, where do I go? There’s nowhere for me to go. And I think that’s a really big—even if it’s not fear for your life, that fear of not having anyone you can have a relationship with anymore, I think that’s really powerful.

Male #6: I would think fear is a huge driving factor in propaganda. When people have something worth keeping, they tend to let things happen more. I think the government is much more able to convince the average citizen: “You know what? We have to go and harm these people to keep your way of life.” And I think that’s largely what happened with the Holocaust.

Male #2: I was born in Nazi-occupied Holland, and I lost much of my family actually in the Holocaust. I think the important message is really exactly the words that Adolf Hitler used, that “propaganda can be a terrible weapon in the hands of an expert.” And the key then becomes really evaluating the message for what it is. And that’s, I think, a key role of the public.

Teenage female #1: When I feel like [laughs] something I’m watching or something I’m seeing is starting to make me feel like I know it wants me to feel, I start paying very close attention to the facts of what they’re saying. And I start trying to pull away from, like, the music in the background or the images I’m seeing and try to really focus on: What are they saying here? And what do I know about it? And is it right? Does it make sense?

Female #3: Propaganda feels most sinister to me when it tries to tap into your casual, everyday networks. One of the aspects of social media is this kind of equation of voices and just the blurring of public and private lines in ways that really demands that people think carefully about the sources of information and the contexts of information before they then start to share it.

Female #4: For propaganda to be effective, the people that are doing the promotion are banking on you not doing the research. They’re hoping that you’re going to be lazy and just go with it.

Female #1: It’s always going to be tempting to only visit the websites that you agree with. It’s validating. It’s also easier.

Female #2: We either don’t have time or don’t choose to analyze things more deeply. And I think sometimes we feel like, even if we did, our voice would not make a difference. You know, things will be okay without us.

Teenage female #2: I think it’s about keeping yourself informed. You can’t really control what a politician does or what someone is trying to sell you. But the more you keep yourself informed, the more you won’t be susceptible to bad propaganda. And you’ll be able to identify it for what it is.

Male #6: The average citizen has a lot more power than we think we do.