Tad Stahnke believes that discrimination can exist in any society, and affect any individual. Everyone has an interest—and a responsibility—to confront violence and prejudice in our communities. 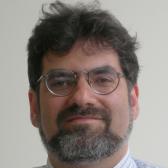 Tad Stahnke believes that discrimination can exist in any society, and affect any individual. Everyone has an interest—and a responsibility—to confront violence and prejudice in our communities.

TAD STAHNKE:
Violent hate crime is a problem that's shared. So it's not a blot on a particular country, from the fact that it exists. The real measure of a society is how it responds.

ALEISA FISHMAN:
Tad Stahnke believes that discrimination can exist in any society, and affect any individual. Prejudices are pervasive and shifting, he says. And everyone has an interest—and a responsibility—to confront violence and prejudice in our communities. Through his work with the organization Human Rights First, and his own personal experiences, Stahnke has found that the first step, perhaps, is empathy.

Welcome to Voices on Antisemitism, a podcast series from the United States Holocaust Memorial Museum made possible by generous support from the Oliver and Elizabeth Stanton Foundation. I'm your host, Aleisa Fishman. Every other week, we invite a guest to reflect about the many ways that antisemitism and hatred influence our world today. From Washington D.C., here's Tad Stahnke.

TAD STAHNKE:
I had no idea that I was going to be doing something like this. I actually never could’ve dreamed that I would be doing something like this. But, I'm a member of a minority group and felt what it was like to grow up as a minority in the United States. So I had my share of being called a "kike" on the playground and that never sat very well with me. But as an adult, I had a interesting experience. The first time that I traveled internationally, I was in London and just walking down the street. And I had been in Asia for quite some time, so I had a big beard and was pretty tan. And I was accosted several times on the street and called "Paki." I guess people thought I was Pakistani.

And, to me, it created a level of solidarity with people who could be targeted in that way, just because of what I looked like, and people thought that I was. You know, when you get yelled at and told to go home, you begin to start to think about the position that other people are living in, just day to day, subject to that form of abuse and that kind of simmering hatred. Makes you want to fight back. So I took my training as an attorney and turned that to human rights, and specifically to religious freedom, protecting religious freedom, and combating violent hate crime.

Since 2002, Human Rights First has been working to combat hate crime, antisemitic, racist, xenophobic, anti-Muslim, homophobic violence throughout the 56 North American and European countries of the Organization for Security and Cooperation in Europe (external link).

One of the most important ways to combat this type of violence, for an organization like us, is to bring attention to it wherever it occurs and to continually to try to bring attention to the failings of governments in responding to particular incidents or failing to respond as a matter of policy. You know, it's true that, at the highest political levels, these are topics that aren't... they're not discussed freely. But, we try to stress that it's in a country's own interests to take a vigorous approach to deal with these types of tensions and violence.

Individuals have an important role to play. Efforts at interethnic or interreligious cooperation can demonstrate that, from the community's point of view, there will be no tolerance for these types of incidents. And they will be condemned. And things that take place on the local level have national and international repercussions. There's a bewildering amount of different types of bias that are at play here. And anyone could be a target. It's not just Jews. It's not just Muslims. It's not just people of African descent. It's gays and lesbians. It's Hispanics and other immigrants, people who are thought to be foreigners. It affects the lives of so many people. And the more that people realize that, the more that people will demand a response.