Sarah Wildman is a journalist and the author of Paper Love: Searching for the Girl My Grandfather Left Behind. In her book, Wildman documents a journey to find her grandfather’s girlfriend Valy Scheftel, who stayed behind in Vienna in 1938 when he immigrated to America. The book is a detailed portrait of one young woman’s experience during the Holocaust, but also a deliberation about this generation’s role in preserving memory. 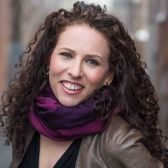 Sarah Wildman is a journalist and the author of Paper Love: Searching for the Girl My Grandfather Left Behind. In her book, Wildman documents a journey to find her grandfather’s girlfriend Valy Scheftel, who stayed behind in Vienna in 1938 when he immigrated to America. The book is a detailed portrait of one young woman’s experience during the Holocaust, but also a deliberation about this generation’s role in preserving memory.

SARAH WILDMAN:
How do we make these stories tangible? How do we make these histories tactile? To some degree, it really is peeling back from six million to one. You know, what does this one person’s story look like, and how do we relate to it? Because they seem much more relatable when you can think of one, rather than six million.

ALEISA FISHMAN
Sarah Wildman is a journalist and the author of Paper Love: Searching for the Girl My Grandfather Left Behind. In her book, Wildman documents a journey to find her grandfather’s girlfriend Valy Scheftel, who stayed behind in Vienna in 1938 when he immigrated to America. Wildman traces her story across five countries, guided by dozens of Valy’s letters. The book is a detailed portrait of one young woman’s experience during the Holocaust, but also a deliberation about this generation’s role in preserving memory.

Welcome to Voices on Antisemitism, a podcast series from the United States Holocaust Memorial Museum made possible by generous support from the Elizabeth and Oliver Stanton Foundation. I’m Aleisa Fishman. Every month, we invite a guest to reflect about the many ways that antisemitism and hatred influence our world today. From Washington DC, here’s Sarah Wildman.

SARAH WILDMAN:
As a child, we were told my grandfather’s escape from Austria was perfect—that he had escaped with everyone: his mother, his sister, his nephew, his brother-in-law. And as a kid, I didn’t really question that there might’ve been people left out of that narrative. And I also didn’t question what a world looks like—which doesn’t include simply family, but it might include your classmates, it might include the people who live in your building, it might include the people you buy your bread from every day. And I didn’t think about the fact that his entire world was upended, and that, in fact, taking that group of people—while enormous, in the context of the Holocaust and how people escaped—was actually very, very tiny and that he’d lost a great deal.

So, not long after college—my grandfather had died at that point—I was visiting my grandmother, and I came across an album filled with excited and happy European teens on seashores in the 1920s and 1930s. And there were many, many, many photographs of one woman. And folded in the back of that album was a note, and in each quadrant of the note was a selfie, as we’d say now, of this same girl, with a caption: “Will Karl write to me today? Oh, there’s no letter. Maybe tomorrow.” And it was dated May ’39. And I showed it to my grandmother and she said, quite drily, “Oh, that was your grandfather’s true love.” And she didn’t offer anything further. So I contacted my great-aunt, who had escaped with him, and she said the woman’s name was Valerie—Valy Scheftel. She’d come from Czechoslovakia, where she was born—a tiny town called Troppau. She’d come alone to study medicine and met my grandfather, had fallen in love with him immediately, and they had a whirlwind romance and planned to escape together. And my great-aunt said, “Please find out what happened to her. I have always wondered.”

My grandfather had a box labeled “Patient Correspondence: A–G.” And one night, visiting my parents, I idly opened it and discovered pretty much immediately they weren’t from patients; hundreds of letters held together by rubber bands that no longer had any snap, that disintegrated as you touched them, and they were from all the people that had not been considered by that perfect story of escape: his nieces and nephews, his half-brother, his relatives, and dozens and dozens from Valy herself. So with her letters in hand, I thought I would re-trace her steps starting in Vienna, where she studied, and even further back, in Troppau, the town that she was from. I wanted to find out more about her family. Why did she only speak about a mother in these letters? And ultimately, I find out that her mother was a single mother—had divorced a year after she was born—and had raised her alone. And so she returns to Troppau. And, in fact, a lot of women stayed behind for mothers. A lot of men left, when it was initially believed that the violence would be directed primarily at men. But she was still in Troppau when my grandfather joined the line at the American Consulate in Vienna and requested those exit visas to get out, in the spring of 1938, when he started his efforts to leave.

The other piece for me that was shocking was that she doesn’t know what I know. I had to sort of go back and retrain my thinking again and again and again, to say: God, it seems bizarre to return to Czechoslovakia; why wouldn’t you join this consulate line and tell your mother to join you? But then you realize, no, Czechoslovakia’s free. She doesn’t realize that Troppau will be handed over that September—that actually their timeframe is so tiny. And so, for her she thinks she is buying time returning to Czechoslovakia. And then those areas of Sudetenland become virulently, aggressively antisemitic, and she ends up doing something that to me again seems counterintuitive, she moves to Berlin. Why Berlin, of all places? It seems to be the belly of the beast. But in fact, there she’s anonymous. In Troppau, they knew who she was. And eventually, her mother does join her. But she believes in Berlin—where the Jewish community is largest and where there’s opportunity to work—that she will have more chances to both emigrate, but also survive.

So I wanted to paint that picture as much as possible, and weave her words within it, and allow her to tell us as much as she could tell us, and look at the fact that she is speaking, often, in code. For example, when she starts to write to my grandfather with increasing anxiety in the spring of 1940, she doesn’t say much. But he then at the same time receives a letter from a rabbi named Alfred Jospe. And he says, “I can get her illegal visas to Chile. They look really good. We’ve done it for my in-laws. All you need is $150 per person, for her and her mother.” And so, at that point, I actually started to look into what my grandfather was doing. What was happening for him? He had not had money in Vienna. He had his degree in hand, but he had not had money. When he is being asked for $300 for illegal visas to Chile that should work, but might not, he’s requesting loans in amounts of $20 and $40. And he can barely survive. But it’s at this moment that he’s being told, “You can rescue her.” But the moment passes, because $300 might as well have been a million.

For me, I think that it was easier to ask questions about these things than it had been for my parents’ generation. Because narratives were produced and polished over time, and to some degree there was a sort of tacit understanding not to push very hard against these narratives; that, a lot of times, this would be opening doors that were too painful to open. And I think I understood the war in a different way; that it was not simply survival or not survival, but the world that you’d left behind had disintegrated, but there were people left in it. That those were life-shaping experiences that weren’t even conveyed in that manner to us in any way.

Throughout this process, this has been a question of restoring the dignity of individuality to both of their stories: to both the story of Valy specifically, and my grandfather. I went through two pregnancies during the course of writing this book, and so I was very conscious of the fact that my girls will not know this generation. And what would I like to teach them? What would I like them to know? What happens to the fourth generation, once this generation is no longer here to give their eyewitness accounts? And will letters like Valy’s serve to some degree as witnesses, in different ways than they have? And I’ve had people very specifically write to me and say that they related to the story of Valy. It’s not that odd to imagine her in your world. And I think there’s something really important about seeing these people as not distant and not just victims, but as people who lived and had dreams, and who wanted to just be a doctor or a chemist, or whatever it was that they wanted to be. And I think that we are this bridge, because the impact on my generation is still palpable. It’s still clear. And yet, we were able to ask questions about the narratives we’d been given and sort of say: what has been left out of those narratives that we can still listen to, that we can still look for, that we can still find, before it’s too late?