Sarah Jones is well known for her one-person Broadway show Bridge & Tunnel, in which she delivers monologues from fourteen characters of different ages and cultural backgrounds. Jones has dedicated her work to bringing people together through shared stories. 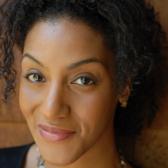 Sarah Jones is well known for her one-person Broadway show Bridge & Tunnel, in which she delivers monologues from fourteen characters of different ages and cultural backgrounds. Jones has dedicated her work to bringing people together through shared stories.

SARAH JONES:
We are not these separate, quote-unquote races. But I think that there are certain groups whose interests are served by perpetuating antisemitism and racism and the belief that not only are we different, but we should therefore separate ourselves. And I think if we remember how connected we actually are, it's actually a wonderful route to reconnect with ourselves.

ALEISA FISHMAN:
Sarah Jones is a playwright and performer, well known for her one-person Broadway show Bridge & Tunnel, in which she delivers monologues from the perspectives of fourteen distinct characters of different ages and cultural backgrounds. Jones is concerned about the ways in which people are divided and has dedicated her work to bringing people together through the power of shared stories.

Welcome to Voices on Antisemitism, a podcast series from the United States Holocaust Memorial Museum made possible by generous support from the Elizabeth and Oliver Stanton Foundation. I'm Aleisa Fishman. Every month, we invite a guest to reflect about the many ways that antisemitism and hatred influence our world today. From New York City, here's Sarah Jones.

SARAH JONES:
I'd say my work and my performance are rooted in characters I develop based loosely on composites of real people. And then I try to write monologues from the perspective of these invented people and that hopefully offer something that perhaps an audience might not know about them. I refer to them as "my people"; I really, you know, kind of speak of them in the third person. And I really believe in them, so I love giving them a chance to share what they believe on stage.

So sometimes in a context like this, I'll share some of the characters' voices themselves, because they're a lot more expressive than I can be about them when I just let them be themselves. I'll give you an example. I have a character in Bridge & Tunnel whose name is Lorraine Levine. She's an older…she's a, for lack of a better way to put it, she's my Bubbe character. And she is loosely based on real relatives of mine. So, well, I'll let her tell it:

Hello? I'm sorry to interrupt, I just want to quickly say, speak for myself, because Sarah will go on and on and she won't get to the point. And the point is that we all share hope for our families and for future generations that they might have a better life than we had.

So that's Lorraine's take. I have a character, who is an African-American young man, named Rashid:

So that's Rashid. And, let's see, I guess I have another 20 or so characters that we don't have time for. But they all speak to me because I'm their neighbor; I'm their family member. And I feel really privileged that, when I walk down the streets of New York City, or hop into the back of a taxi and there's a Russian guy in the front seat, I'm reminded that I have a character, a part of me, that really relates to him:

I think of Boris Osterovsky who lives inside my mind. So, this is my New York. And I lend my New York to Sarah Jones for loan when she needs loan. Okay, that's it.

So those are some of my people who…they enrich my life. And I like to share them with others.

So I've been interested in this kind of work really all my life and I think that is because I come from a multicultural family, where my mother is a very white-appearing mixed person. My grandmother was Irish-American and German-American, and my grandfather's family was from the Caribbean. And within that extended family were both Christians and Jews. And my father's family is African-American from the South. You know, Thanksgiving at our house was, I mean, it was like being at the passport office or something. And so I had various experiences, from learning the polka from my grandmother, to my first Seders, and my first bar and bat mitzvahs, and learning to dance Merengue. All of these experiences were part of my growing up. So that's the context for my coming into the world. And so I think it's pretty easy to trace what I do today back to those beginnings.

The question of stereotypes has always been foremost in my mind around these characters, because I'm an African-American woman, portraying people who may or may not look like me or sound like me. And I think of two things as real antidotes to the stereotype disease. And those are: truth and context. As long as I start from a place of truth, if we can look at the context in which a particular trait develops in a group of people, it's a lot harder to just belittle people for aspects of how they might be in the world. And it's a lot easier to remember their humanity, and to remember the multiple facets of all of our humanity and that, you know, again, throughout history, there have been lots of different reasons to stereotype people in various different ways and to attach certain kinds of moral pronouncements about them. And that doesn't really have anything to do with who they are as human beings.

There's healing—I hope there's healing—in the work I try to do that's about connecting across cultures. And I think sometimes that work is urgent, as in the case of when we have a situation in our history like the Holocaust. The inhumanity that one self-described group can show to another; I don't believe that can happen if we're able to see each other as part of one whole, as opposed to enemies or adversaries. If people can actually connect, we see that there isn't really any separation; there is no "us and them" and therefore there can be no "us" versus "them."