Sadia Shepard's book The Girl from Foreign documents her travels to India to connect with the tiny Jewish community there and to unlock her family's history. The trip and the book have given her unique insights into the relationships among Jews, Muslims, and Hindus in India. 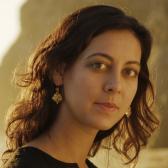 Sadia Shepard's book The Girl from Foreign documents her travels to India to connect with the tiny Jewish community there and to unlock her family's history. The trip and the book have given her unique insights into the relationships among Jews, Muslims, and Hindus in India.

SADIA SHEPARD:
I think one of the things that the communities like the Bene Israel have to teach us is this idea that being influenced by multiple traditions can be a source of strength. And it can help us to define who we are perhaps even more strongly.

ALEISA FISHMAN:
Sadia Shepard's book The Girl from Foreign: A Search for Shipwrecked Ancestors, Lost Loves, and a Sense of Home documents her travels to India to connect with the tiny Jewish community there and to unlock her family's history. The trip and the book helped her to understand her own multi-faith heritage, and have given her unique insights into the relationships among Jews, Muslims, and Hindus in India.

Welcome to Voices on Antisemitism, a podcast series from the United States Holocaust Memorial Museum made possible by generous support from the Oliver and Elizabeth Stanton Foundation. I'm your host, Aleisa Fishman. Every other week, we invite a guest to reflect about the many ways that antisemitism and hatred influence our world today. From New York City, here's Sadia Shepard.

SADIA SHEPARD:
I grew up in the Boston area as the product of a kind of an unlikely love story. My mother, Samina, came to this country in the early '60s as a foreign exchange student from Karachi, Pakistan, and later ran off with my American Christian father who was from the mountains of Colorado. And I was raised in a home in Newton, Massachusetts, which was this kind of wonderful hodge-podge of these two different cultures. I was also raised by my maternal grandmother, whom we called Nana. And Nana had come from Pakistan in 1975 to help raise me. I discovered when I was about 13 that my Nana was not Pakistani and Muslim as I had always assumed her to be, like everyone else in my mother's family, but in fact had been born into a very tiny group of Jews in western India, a community called the Bene Israel. I couldn’t quite fathom how my grandmother, who wore a sari and made what I thought of as Pakistani food, was in fact an Indian Jew. And I began to ask her more and more and more about her community and her origins. And I discovered that she had originally been a member of the Bene Israel, who believed that they were shipwrecked on the western coast of India in 175 B.C.E. They believed that they landed in India seeking a new life. They believed they were descended from one of the lost tribes of Israel. And this new knowledge was a revelation to me, and became a kind of catalyst in my life.

There are about 5,000 Jews living in India today. And each one of these Jewish communities has a unique history. But all of them share a great legacy of having almost entirely escaped antisemitism in their history on the Indian subcontinent—something that they are very proud of—the fact that here is a place, in one corner of the world, where Jews and Muslims have, and continue to live amicably with one another. And I interviewed a synagogue caretaker named Flora in 2001 at one of the largest synagogues in Mumbai, which is called Magen David. And she said, "You know, the Muslims have always been our friends. There was some fear during the 1967 war that there might be some tension in this neighborhood because we had such a significant Jewish presence in the midst of a Muslim majority. And the Muslim shopkeepers who had their stalls just outside the synagogue gate held hands on the day that they were worried that there would be this tension. They held hands across the synagogue gate and they said 'this is a house of God and we must protect it.'" And nothing happened that day. But she told me this story with great pride, and she said, "The Muslims have always been, and continue to be, our friends." And I found that story quite inspiring.

Last fall in the tragic terrorist attacks that rocked the city of Mumbai, in addition to the Taj Hotel and the Oberoi Hotel as well as Victoria Terminus train station, there was another pivotal point of attack, which was the Chabad Jewish center, which had been a kind of a community center, a gathering place for young expatriate Jews traveling to India. And so, we’re in a time now where we see people of different communities increasingly pitted against one another. And it's a time of tremendous turbulence in the Indian subcontinent and all over the world. I think in order to move beyond this idea of a clash of civilizations, we need to understand that no religion, whether it is Judaism or Islam or Christianity, is a monolith. There is a tremendous diversity in the way that faith is practiced. I had this Muslim mother, a Christian father, Jewish grandmother; and there are different beliefs; there are different ideas at play. But my parents—all three of my parents—stressed the commonalities. I have cousins that are settled in Pakistan, and I have cousins that are settled in Israel. Now, these two strains of my family certainly don't always see eye to eye. But again, because of my grandparents' alliance, are tied together and are kind of forced to consider the human face on the other side of the headlines. And that's an opportunity that I feel uniquely lucky for having been given.