In her 96 years, Ruth Gruber has been a witness to history, fighting injustice with her words and her photographs. 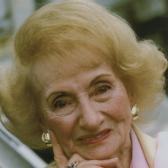 In her 96 years, Ruth Gruber has been a witness to history, fighting injustice with her words and her photographs.

DANIEL GREENE:
In her 96 years, Ruth Gruber has been a witness to history. As an American exchange student in Germany during the 1930s, she saw Hitler's plans unfold. As a journalist covering World War II, she accompanied a group of Holocaust survivors to New York. And, immediately following the war, she covered the passage of the Exodus, a ship filled with nearly 4,500 Jews trying to make their way to Palestine. Gruber summarizes her legacy as fighting injustice with the tools she knows best—her words and her photographs.

Welcome to Voices on Antisemitism, a free podcast series of the United States Holocaust Memorial Museum made possible by generous support from the Oliver and Elizabeth Stanton Foundation. I'm Daniel Greene. Every other week, we invite a guest to reflect about the many ways that antisemitism and hatred influence our world today. Here's photojournalist Ruth Gruber.

RUTH GRUBER:
I loved German culture, German language, and German music, of course. So I got a fellowship to Madison, Wisconsin, the German Department, and from there went to Germany for one year. And I watched Hitler coming into power.

He had learned how to gather up different segments of the population, telling each of them how the Jews were their enemy, how America was evil. I can still hear that hysteria to this day. And I felt that that voice I was listening to came not from the vocal chords, but from his bowels. It was a hideous, hysterical voice.

When I got back to America, they said to me: "Why are you worried about this guy? He'll be out in a year."

Even German Jews felt that way, this lunatic, this clown, this madman who was promising everything to every group of people. How wrong they were. And if you heard him and watched him, you knew this was no clown. This was a future dictator, who knew just how to win people over.

Yes, yes. I think that's what taught me that you have to be an eyewitness to understand what's going on in the world.

When the war ended, people think that the Jews who had survived the Holocaust would rush out of Auschwitz, and Bergen Belsen, all the others, tear down that cynical sign: "Arbeit macht frei—Work makes you free" and live happily ever after. That's not what happened. The Jews who had survived, those who could walk, those who were healing, went home but everybody was dead, and they knew they could no longer live in these towns and villages, shtetls, where they had grown up.

And we were in Jerusalem when I learned that a ship called Exodus 1947 had been attacked by four British warships. And I remember sending a cable to the Herald Trib saying it looked like a matchbox splintered by a nutcracker. One whole deck had been wiped out. You saw mothers looking for children. You saw children running around looking for parents.

The British Parliament was debating what to do with them. It was heat, 105 degrees. After 18 days in that terrible heat, word came that the Jews of the Exodus are going back to Germany. The world was so outraged, that reporters came from Japan, from China, from South America. And on the eighteenth day, the British Consul called us all together and said, "We're going to take three reporters."

And they decided that I should represent the entire American press. I think they've regretted it for 40 years—60 years!

So I climbed up to the topmost deck and when they saw me come up, strong-armed young men, who looked utterly different from the way they had looked in '46 when they looked like skeletons, raised a flag. They had painted the swastika on the British Union Jack. I realized this was a historic flag because in this whole miserable situation, they had seen the way to defy the whole world.

And they said: "Go below. Go see our floating Auschwitz."

And I went below, to the holds. It was a scene out of Dante's Inferno. You saw half-naked men, you saw women holding babies. And when they found that a woman, an American, a Jew, somebody who spoke some of their languages, especially German, they began to shout phone numbers.

"My mother's in Chicago! My sister's in Detroit!"

"Telephone them! Tell them I'm alive!"

They gave me all these little slips of paper. And I promised I would call their relatives, and I did when I got home.

And then they said: "Take pictures! Show the world how we're treated, in this darkness!"

And I began taking pictures. I don't know how, because I was blind. The only light came from a little window. And I thought none of these pictures will come out, and to my surprise, every one of them came out. And that light was exactly right.