Robert Edsel's book The Monuments Men is about a group of Allied men and women tasked with saving the cultural and artistic treasures of Europe. Now a Hollywood film, Edsel's book details the extraordinary scale of Hitler's theft, alongside the calculated destruction of Jewish art and culture. 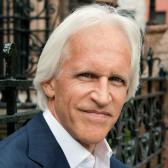 Robert Edsel's book The Monuments Men is about a group of Allied men and women tasked with saving the cultural and artistic treasures of Europe. Now a Hollywood film, Edsel's book details the extraordinary scale of Hitler's theft, alongside the calculated destruction of Jewish art and culture.

ROBERT EDSEL:
What are our obligations? These works of art, these cultural treasures, these immense libraries of knowledge that have passed down through the ages. They haven't survived by accident. We watch over them, we take care of them, because it's important. And what kind of civilization would we be without those things?

ALEISA FISHMAN:
At 39 years old, Robert Edsel sold his Texas oil company and moved to Florence. He began to study art informally and wondered how so many of the great artworks of Europe had survived World War II. This question led him to write a book called The Monuments Men, about a group of Allied men and women tasked with saving these cultural and artistic treasures. Now a Hollywood film, Edsel's book details the extraordinary scale of Hitler's theft, alongside his calculated destruction of Jewish art and culture.

Welcome to Voices on Antisemitism, a podcast series from the United States Holocaust Memorial Museum made possible by generous support from the Elizabeth and Oliver Stanton Foundation. I'm Aleisa Fishman. Every month, we invite a guest to reflect about the many ways that antisemitism and hatred influence our world today. Recorded during a recent visit to Washington DC, here's Robert Edsel.

ROBERT EDSEL:
The Monuments Men describes a group of men and women, mostly middle-aged, who were museum directors, curators, art historians, architects, archivists, who had very established careers. Most had families. Many had kids. So they had every reason in the world to not walk away from these hard-earned positions. But they wanted to serve, and my book Monuments Men covers the paths and journeys of about eight of these Monuments officers who were close to the front line or on the front line, as they're trying to preserve cultural treasures. And these Monuments officers had no command authority, they couldn't force people to do stuff. The idea of a bunch of museum people running around telling the Army what they could and couldn't shoot at seemed awfully far-fetched. And at the most official levels, sometimes it was. But what the Monuments officers discovered, much to their surprise—and they write about this time and again in their letters home—is that the more they worked one on one with commanders in the field, they started winning people over, because at the end of the day, the younger officers, once they understood why it was important, wanted to comply and agree.

And so the initial effort was to work with Allied air commanders to try and steer bombing away from cultural targets. I talk in great detail about the near-disastrous consequences of British bombing of the center of Milan, and a high explosive bomb landing some 88 feet away from the dining hall housing Leonardo da Vinci's Last Supper. I mean, it'd just be an asterisk in an art history catalogue, rather than a work of art that everybody in the world can identify with. And this, I think, set off the alarm bells domestically about "We gotta be a lot more careful." So these Monuments officers were trying to avoid more disasters like this, and then the art detective element comes in as the Monuments officers start entering these Western European cities and the full extent of the looting and the premeditated nature of it hits home, they begin looking for these missing works of art, which occurs all the way up through the end of the war and into the months that follow.

When you think about a peoples or a race being targeted, and the rounding up of people and incarcerating them and watching the things that have defined them as a peoples, taken from them, in many cases destroyed or denigrated. You can't help but be moved by the inhumanity of this. And the amount of resources and dedication that tens of thousands of Nazi soldiers and administrators bring to this task in Eastern Europe and Western Europe, and the degree of conviction with which they process this effort, taking an eraser to a chalkboard and just wiping out centuries of achievements in history.

So I think the Monuments officers believed this was their contribution. They weren't young soldiers to go and fight into combat, although two were killed. But they understood why these things matter, and I think had this paternal sense of it being their duty as custodians of these things, having this knowledge to do all that they could do to make sure that they were preserved for future generations and that it was a cause that was worth fighting for. You know, that's what motivated these men and women and why they were so proud about what they did.

Learn more about the Monuments Men Foundation for the Preservation of Art.