Reza Aslan is disturbed by what he calls the "global cosmic conflict" between the West and radical Islamism. 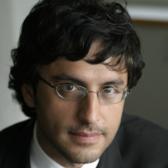 Reza Aslan is disturbed by what he calls the "global cosmic conflict" between the West and radical Islamism.

REZA ASLAN:
I think that in all the sort of hubbub about, you know, the questions of "Why do they hate us?" we haven't actually stopped to say, "Wait, who are 'they' again?"

Part of this, of course, has to do with the whole "war on terror" metaphor. We've essentially launched this ideological campaign by saying in no uncertain terms, "You're either with us or you're with the terrorists."

I mean, there is this problem of creating an undifferentiated enemy when in reality, these are vastly different groups with disparate ideologies, different agendas, sometimes mutually exclusive agendas, and more importantly, many of these groups loathe each other about as much as they loathe the United States. But in lumping them all in one category, not only have we created an undifferentiated enemy, but in truth, we've created enemies where there were none.

DANIEL GREENE:
Reza Aslan, a Muslim scholar of religions, is disturbed by what he calls the "global cosmic conflict" between the West and radical Islamism. Conflicts framed as religious battles, he says, perpetuate a cycle of violence without end. In order to achieve peace, Aslan believes that we must better understand the rhetoric and the underlying causes that fuel the conflict.

Welcome to Voices on Antisemitism, a free podcast series of the United States Holocaust Memorial Museum made possible by generous support from the Oliver and Elizabeth Stanton Foundation. I'm Daniel Greene. Every other week, we invite a guest to reflect about the many ways that antisemitism and hatred influence our world today. Here's author of No God But God, Reza Aslan.

REZA ASLAN:
You know, we're told repeatedly that we're engaged in an ideological war. That's true. But of course, we do understand that you cannot win an ideological war solely with guns and bombs. I mean anybody can figure that out. And indeed, in a war of ideologies, your most potent weapon becomes, of course, your words, your rhetoric.

The whole metaphor of a war on terror, itself, as this sort of global, cosmic battle between good versus evil has put us at an incredible disadvantage, because no matter how hard we try—and I'm telling you we're really trying hard—we are never going to out-fanaticize these fanatics.

The war is a war of propaganda. I mean, I don't want to belittle the fact that there is an actual military campaign taking place that is taking countless human lives, of course. I mean, but that is a different war than the so-called war on terror. The war on terror is not a real war. It's a propaganda war. It's a marketing war, and it needs to be treated as such. You know, we talk constantly about, you know, winning hearts and minds, well winning hearts and minds means propaganda. So yes, of course, there's a role for propaganda in this. It's just that we have not really taken it all that seriously, and we're, in many ways, incompetent to do it.

And many of us have been suddenly thrust in the unfortunate position of having to answer for people who share neither our beliefs, our faith, our culture, our values, our traditions, our customs, and yet, we're now answerable for their actions.

What do we mean when we say "the Arab world?" What is it that binds them together? It's certainly not language. It's not religion. I mean forget the fact that 20 percent of Arabs are Christian. But beyond that, you have Sunni. You have Shiia. You have Ahmadiyya. There are a multiplicity of religious traditions that can be found throughout the Arab world. So, at this point, it's really hard to figure out what it is that binds the Arab world as one anymore, except Israel. Essentially, Israel—and more specifically, pro-Palestinian Intifada propaganda—has become the new pan-Arabism. It's the only thing that connects a Moroccan to an Egyptian to an Iraqi to a Lebanese is this sort of common conception that there is a, kind of a faceless enemy out there that is responsible for the lack of political, or religious, or social, or economic reform in their regions. Now the truth of the matter is that most of the dictators of the Arab world—and they're almost all dictators—take advantage of this sentiment to deflect any kind of responsibility for, you know, their own part in the lack of political, or social, or economic development.

And so my argument is that if we truly want to see dramatic political, and social, and even religious reform in that region, it's not going to come through any kind of war. It's certainly not going to come through any kind of outside influence, some kind of democratization process. The only way to see that kind of reform is to take away the crutch that for thirty years has been used to deflect any responsibility for reform, and that crutch has been the Israeli-Palestinian conflict.

When you talk to Arabs about their anti-Jewish sentiment, it really cannot be differentiated from their views on Israel. And for most people at least, for the average person on the street, this is not a clever ploy. They honestly and seriously cannot differentiate between "Jew" and "Israeli," between "Jew" and "Zionist," because their understanding is—as Israel makes very clear—that all Jews, regardless of their nationality, regardless of their culture or ethnicity, are de facto citizens of Israel. And so they cannot understand how you can be both a Jew and a critic of Israel, or that you could be a Jew and an anti-Zionist. "Zionist" and even "Jew" has become the catchall word in the Arab world that essentially means "them."

You know for so many years, the conflict in Israel-Palestine has been framed as a conflict between Jews and Muslims. But of course, this isn't a war between Jews and Muslims. This isn't a conflict of doctrine or theology. This is a war over land, and territory, and resources, and rights. And unless we are willing to consciously and proactively strip that conflict, and indeed, all of these conflicts, of their religious connotations, we will never be able to deal with them, because religious wars, cosmic wars cannot be won. They cannot be won. They cannot be lost. They're eternal, never-ending conflicts because, of course, what is at stake in the minds of those fighting these cosmic wars is not any kind of land, or territory, or political, or social issue, but one's identity, one's existential being. And when that's at stake, there is no room for compromise. There is no room for negotiation. There is no room for settlement. A war over one's very identity cannot conceivably be lost, but at the same time, of course, it cannot be won.