As a child of survivors, Raya Kalisman first experienced the Holocaust as a family tragedy, and a deeply personal narrative. As a young teacher, she was among the first generation to bring Holocaust studies to the classroom, as a historical narrative for Israeli students. But ultimately, Kalisman began to view the Holocaust as human narrative to be shared and studied across cultures. And in 1995, she founded the Center for Humanistic Education at the Ghetto Fighters’ House Museum in Israel. 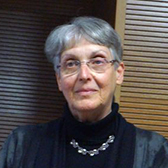 As a child of survivors, Raya Kalisman first experienced the Holocaust as a family tragedy, and a deeply personal narrative. As a young teacher, she was among the first generation to bring Holocaust studies to the classroom, as a historical narrative for Israeli students. But ultimately, Kalisman began to view the Holocaust as human narrative to be shared and studied across cultures. And in 1995, she founded the Center for Humanistic Education at the Ghetto Fighters’ House Museum in Israel.

RAYA KALISMAN:
We want to deal with the Holocaust from a very broad aspect of looking at what happened to human beings during this very difficult time, and trying to educate our participants to encounter discrimination, and violation of human rights, and to enhance their moral judgement.

ALEISA FISHMAN:
As a child of survivors, Raya Kalisman first experienced the Holocaust as a family tragedy, and a deeply personal narrative. As a young teacher, she was among the first generation to bring Holocaust studies to the classroom, as a historical narrative for Israeli students. But ultimately, Kalisman began to view the Holocaust as human narrative to be shared and studied across cultures. And in 1995, she founded the Center for Humanistic Education at the Ghetto Fighters’ House Museum in Israel.

Welcome to Voices on Antisemitism, a podcast series from the United States Holocaust Memorial Museum made possible by generous support from the Elizabeth and Oliver Stanton Foundation. I’m Aleisa Fishman. Every month, we invite a guest to reflect about the many ways that antisemitism and hatred influence our world today. Recorded during a visit to Washington DC, here’s Raya Kalisman.

RAYA KALISMAN:
I established the Center for Humanistic Education at the Ghetto Fighters’ Museum in October 1995. The team of the Center for Humanistic Education is a mixed team of Jews and Arabs, and we are teaching, we are dealing with the Holocaust in Arabic with our Arab participants, with Arab facilitators, and in Hebrew with Jewish facilitators. It’s very, very delicate and explosive material, but it’s very important for us that everyone will learn about the Holocaust because we believe that as it happened to human beings by human beings, everyone, every human being, needs to learn it. And through all this process of dealing with the Holocaust, we are also working on group skills of learning to listen to each other, of being tolerant to different ideas even if it makes you crazy. We are really trying to work with making our participants be able to listen to narratives, the family narratives of the Other. With every lesson, we are trying to start with the history text and context, and then to reflect of how this lesson is relevant to your reality now, wherever you are living.

I was born in the state of Israel, 1949, to a family that fled from Germany in ‘33. The Holocaust was some kind of a cloud in our family, an unspoken cloud, because many of my parents’ siblings stayed behind and perished. I am a history teacher by profession. I studied history at the Hebrew University in Jerusalem, and Haifa University. But the Holocaust was no subject you could choose to study at this time. The first time that it came up as a subject, it was in the early 80s. There was a training process for history teachers to learn the history of the Holocaust. And I had to start teaching it, which was very, very difficult for me, to put it down to facts, and to process, and to just teach it as a history chapter.

Starting to teach in the regional Jewish school in our area, my principal asked me to reach out to our Arab neighbors, which for me was the first time—I’m already in my 30s—and it’s the first time for me to meet the Arabs in person. Although Haifa is a mixed city, but the Arabs are living downtown and there is no connection. And here I have a mission to meet Arab colleagues. They were human beings, very kindly and with time, we became friends. And, for me, it was learning another narrative about Israel, a total different narrative from the one that I grew up with in the Jewish school system. I knew that for my Arab colleagues, the Holocaust, either they denied it, or they feel they are the victims of the victims. And here I learned about my neighbors that are looking at whatever is done in Israel from a total different point of view, which wasn’t easy in the beginning, but today I can’t look at anything not from both eyes.

When we started, we thought that in a matter of a few years, things will resolve and we’ll not have any work anymore. Especially when we remember that when I started the Center, it was 1995 after signing the Oslo Agreement and everyone was very optimistic. Unfortunately, things are only deteriorating and it becomes more and more difficult with the years. And the last few years are even more and more difficult, because the two sides become more and more extreme, more racist. The language is much more crude. People lost their shame and they’re saying awful things to each other. It starts from our politicians and goes down to our school classrooms. And it’s really very, very difficult to have a civil lesson in schools today. Now, the Center for Humanistic Education, which starts from the Holocaust and from the dangers of hatred and the dangers of racism, it gives a point of understanding how important it is to speak with each other. And it’s not easy dialogue, but we have dialogues and we see that it’s doable and it’s not for granted.