Turkish scholar Pinar Dost-Niyego faces some hurdles when teaching the Holocaust in Istanbul—including Turkey's own history of antisemitism and anti-minority laws. But Dost-Niyego sees change in her students as they begin to connect with the personal stories of Holocaust victims. 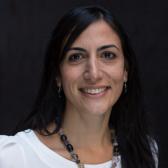 Turkish scholar Pinar Dost-Niyego faces some hurdles when teaching the Holocaust in Istanbul—including Turkey's own history of antisemitism and anti-minority laws. But Dost-Niyego sees change in her students as they begin to connect with the personal stories of Holocaust victims.

PINAR DOST-NIYEGO:
People in Turkey even don't know what means, "Holocaust." In the streets, if you ask ten persons, "What does it mean, Holocaust?" maybe one person will be able to answer. And I think we need this education in Turkey.

ALEISA FISHMAN:
Turkish scholar Pinar Dost-Niyego faces some hurdles when teaching the Holocaust in Istanbul—including Turkey's own history of antisemitism and anti-minority laws. But Dost-Niyego sees change in her students as they begin to connect with the personal stories of Holocaust victims. And she believes that study of the Holocaust can help Turkey come to terms with its own history.

Welcome to Voices on Antisemitism, a podcast series from the United States Holocaust Memorial Museum made possible by generous support from the Elizabeth and Oliver Stanton Foundation. I'm Aleisa Fishman. Every month, we invite a guest to reflect about the many ways that antisemitism and hatred influence our world today. Recorded during a visit to the US Holocaust Memorial Museum, here's Pinar Dost-Niyego.

PINAR DOST-NIYEGO:
In my time, when I was a high school student, there was no Holocaust mentioned. And even I never thought that I could teach something on the Holocaust before. But now I think completely different. We can include it in many courses and it will be relevant, because there are lessons…universal lessons on human beings and tolerance, and that diversity is a richness, not something we have to erase.

Because you know in Turkey there is a high level of nationalism, and in 2009, there was a survey that most of the people say that they don't want to have Jewish neighbors. I was shocked. They are seen as foreigners and there are some prejudices always current. If you look in the press, you will have Holocaust denial, antisemitism; when there is a problem with Israel or when there is Israel-Palestine issue, each time you will have Holocaust denial. People can't make the separation between Israel, the Holocaust, Zionism. And all of these notions are mixed. Nobody makes the differences.

One day, a friend of mine asked me to go to a meeting on Holocaust education. I said, "Okay." But I started to read about the Holocaust education and I figured out that I know nothing. And why we didn't learn about it? It's crazy. And how my students don't know about it. So, in the classroom I applied an exercise that I learned from the United States Holocaust Memorial Museum. For this exercise, you have IDs of victims—where they were born, what happened. Each time you have a victim, the students have to go and paste this on the walls. And to see all these details was really important for my students, to see that there were people their age who were killed; there were people maybe who were doing the same studies at university like them. And to see the pictures of these people and to see how the countries responded or not, helped them to connect with this history. And also it makes it possible to realize how the Turkish Jewish community…how they lived—not only during the Second World War, but during the Turkish Republic history, all the anti-minority laws—all these things became more relevant. And they could make connections between our history and the history of the Holocaust. And they had different feelings at the end of the course; I felt it.