After a deadly attack on a Copenhagen synagogue in 2015, Niddal El-Jabri felt compelled to act. Inspired by expressions of non-violent solidarity happening as part of the Arab Spring, El-Jabri decided to organize a “peace ring” around the synagogue. 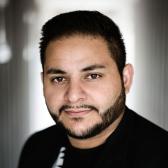 After a deadly attack on a Copenhagen synagogue in 2015, Niddal El-Jabri felt compelled to act. Inspired by expressions of non-violent solidarity happening as part of the Arab Spring, El-Jabri decided to organize a “peace ring” around the synagogue.

ALEISA FISHMAN:
After a deadly attack on a Copenhagen synagogue in 2015, Niddal El-Jabri felt compelled to act. Inspired by expressions of non-violent solidarity happening as part of the Arab Spring, El-Jabri decided to organize a “peace ring” around the synagogue. Over a thousand Danes from diverse backgrounds—including the father of the volunteer security guard killed outside the synagogue, Denmark’s chief rabbi, and government ministers—formed a human chain to demonstrate unity in the face of hateful violence.

Welcome to Voices on Antisemitism, a podcast series from the United States Holocaust Memorial Museum made possible by generous support from the Elizabeth and Oliver Stanton Foundation. I’m Aleisa Fishman. Every month, we invite a guest to reflect about the many ways that antisemitism and hatred influence our world today. From Copenhagen, here’s Niddal El-Jabri.

NIDDAL EL-JABRI:
The next day after the attack, it was actually my wife’s birthday. We had planned to celebrate it, but instead we decided to go and give flowers and pay our respects. And when we visited the synagogue, I mean, it’s easy to see that we are from the Muslim minority because my wife wears the veil. And a young guy came over to us, and he shook our hands and said that he really wanted us to know how important and appreciated it was for us to be there. And it just stayed with me. I was really moved that he had given that much of himself just a few hours after having lost a good friend of his. So during that night, a friend of mine from a different city far away from Copenhagen wrote me on Facebook, and he had noticed these peace rings that had been taking place in Egypt during the Arabic Spring. And it just made sense for me to acknowledge that nobody should have to live in fear. So, I arranged a peace ring where my invitation was that everybody who cares about fighting hatred and everybody who cares about creating a safe environment should participate. So, it was not an exclusive invitation for Muslims. It was just Danes standing together against hatred and violence, saying we do not want extremism of any kind.

Since the event there have been several events that promote peace. It’s like a whole new underground of new organizations and events that talk against hatred, try to talk about cohesion, and you see it from all sides of the society. I myself, I promised that doing a peace ring could not end with that, that we had to do something more long-term. And for this reason, we’re now establishing the minority think tank—think-and-do-tank—that’s called Mino-Think, to just really try to strengthen the civil society to be immune to these terrible messages coming out.

My son is third generation, and I just think it’s so weird that anybody should consider him a minority in Denmark. Obviously, if he decides to wear the Islamic faith, then okay, he’ll be a part of that community. But based on his hair color, and his skin color, and his eye color— it just seems so strange to me that he should be considered someone who’s not Danish.

In Denmark we have one Jewish school for children who are the age of six to, I think, fifteen. And it’s, for a very long time, even before the shooting, been protected by barbed-wire, by cameras, by armed forces. And I think when you’re six years old, you shouldn’t really be going to school and having to see heavily armed police officers.

And I think it’s the strongest argument of them all. We all can look at our kids and understand what world we want to give to them. And it just seems so obvious that if we all try to give that world to each other’s kids that we want to give to our own kids, we would be way better off in society and in the world.